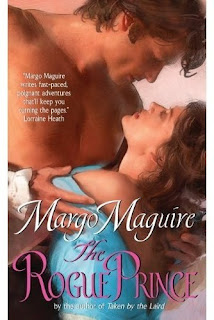 There is nothing quite like beginning a new novel from an auto-buy author who never fails to bring you hours of pleasure with her creativity. For me, Margo Maguire is one such author. I am never disappointed reading one of her novels. In fact, I have adored her books for years. The Rogue Prince is another gem in her bookcase of jewels.

Revenge is the one and only thing that consumes the thoughts and actions of Thomas Thorne. As a young lad of sixteen, Thomas is wrongly accused of a crime by two young, arrogant aristocrats. Being quickly convicted and transported to a penal colony, Thomas loses several years of his young, innocent life to the harsh realities of a violence dished out by a sadistic commandant. But the thing Thomas mourns the most is the lost time with his family. During his incarceration at the penal colony, Thomas befriended an older man, who while on his deathbed told Thomas of his pirate’s treasure hidden on a Caribbean island he named Sabedoria. Determined to make his accusers pay for the years of hardship endured by Thomas and his family, Thomas returns to England with a well thought-out plan to bring down Lord Shefford and Lord Blackmore. Only this time Thomas is not the son of a country horse breeder. No, he returns as Prince of Sabedoria, a man rich beyond words and resolute in his desire for revenge. While watching the townhome of Lord Shefford, Thomas witnesses a small boy running out the door of the townhome and into the street and directly in the path of a barreling barouche. Dashing to the boy and grabbing him before harm could come to the child, Thomas encounters the boy’s worried mother – a diversion that Thomas does not need.

“Thomas swallowed hard and sat up with the child in his arms. It had been many long years since he’d felt the punch of arousal so quickly, so completely. And it was absolutely unwelcome now. He had to remind himself that it was this spoiled aristocracy that destroyed his life as though it meant nothing.”

After leveling accusations against a distant cousin, Marquess of Chatterton, for attempted molestation at the tender age of nine, Margaret has been at odds with her family. Her family never supports her and, in fact, treats her as the black sheep of the family. Even now, two years after the death of her husband Lord Blackmore, Maggie receives no help from her family. Arriving in London to meet with the solicitor regarding Blackmore Manor’s financial situation, Maggie is reminded how much she dislikes being around her family.


“ . . . wishing that the entire family, her sisters and their husbands, as well as her mother, would all just disappear. She had managed very well in the two years since Julian’s death, in spite of her family’s conspicuous absence from Blackmore Manor. She did not need their advice or disapproval now.”

While visiting her stepbrother’s home, Maggie’s oldest child bolts from the Shefford townhouse into the dangerous street. Saved by a man Maggie has never seen before, Maggie is relieved that a total stranger would throw his body and life in danger for the sake of a child. Her child. No one from her family would have the courage to do that. Maggie’s reaction to the prince is just as unsettling as the thought of her child in danger.


“Her mad dash to the street had been unseemly. Even worse was the stab of longing she’d felt when she looked into the prince’s deep green eyes. Her raw emotions had no doubt given him the wrong impression – and yet she’d been deeply aware of those broad shoulders and powerful male physique. He seemed to
be all strength and dependability, compared to her husband’s continuous irresponsibility and frivolousness – which were the cause of his death, in fact.”

Unable to deny the mutual attraction and fascination with each other, Maggie and Thomas embark on a relationship of intense passion and emotion. It seems that whenever the two are in a room together, they cannot keep their hands off of one another. Maggie soon realizes that her marriage to Lord Blackmore did not reveal all the pleasures a man and woman can share. Even the kisses shared with Thomas are more passionate than she ever experienced before.


“It felt like lightning shooting through her when his tongue touched hers. Julian had never kissed her like this, had never seduced her with his mouth and the low pressure of his manhood against her pelvis. He’d never called her lovely.”

As the relationship between Maggie and Thomas progresses, so does Thomas’ much thought out revenge plan. But as the pieces of the puzzle slowly come together, Thomas realizes that Maggie is the widow and the step sister of his two accusers. Taking down the families will ultimately affect not only the woman he has grown to care about, but also her two small, innocent children. Thomas now has to decide which emotion is stronger – love or revenge.
Margo Maguire has done it again!! This novel had me cheering for the unpretentious heroine who never felt pretty enough and the hero who is determined to avenge his wrongful incarceration. I was quickly drawn into the story and invested in the characters almost immediately. The love and passion shared between Thomas and Maggie is tender, yet fiery. If you are in need of a wonderful diversion, I greatly recommend The Rogue Prince. You won’t be disappointed.