Review - - The Secret of the Irish Castle 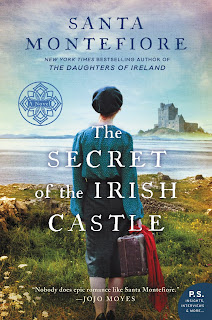 An epic historical set during World War II Ireland, THE SECRET OF THE IRISH CASTLE follows the winding and dramatic twists of the Deverill, Doyle, and O’Leary families. The Deverills are under a curse: all the heirs who pass on are doomed to remain in limbo until an O’Leary is restored to the castle and to their rightful owners. Of course, while everyone knows of the Deverill curse, the still-living family members are much too busy with the daily drama of their lives, which include affairs with chambermaids, married men, or footmen; past crimes as part of the IRA; past crimes as on the run from the American Mafia; and stolen babies sold to American families looking to adopt babies of well-born ladies.

This story is chock-full of rather unlikeable characters--which add a lot of color to the drama (to be fair), like Bridie Doyle’s husband, the Count who isn’t actually a count, who constantly cheats on his beleaguered wife and gambles away her fortune, and her son, Leopoldo, who is spoiled, mean, and self-serving at every turn. (He does fortunately get his comeuppance at the end which was lovely and satisfying on many levels.) There are also very likeable characters, like JP and Martha, who you are set up to root for but soon find yourself in an “ewwww” situation much like Flowers in the Attic. The story itself goes between a number of live characters and then occasionally to the ghosts’ POV, which explains some of the background which has not been revealed yet, offering some sense and understanding to the behavior and motivations of certain characters. (The ghosts were some of my favorite characters.)

The author’s voice is very readable, but the plot felt very complicated and confusing (I constantly flipped to the front of the book to see the family trees because at times I thought I was reading a cast of thousands--I would not do well in a Tolstoy book.) Because there were so many characters, the POV at times felt a bit more surface than I typically enjoy--and as such, the book was much easier for me to put down. For those who enjoy very twisty, complicated storylines and shifting POV, the descriptions of Ireland and the historical setting of World War II will likely be much more enjoyable. The ending of the book was my favorite part--and I do think the author did a great job of tying up all the loose ends and resolving situations with characters (likeable and unlikeable) in a satisfactory manner. It was an okay read for me.