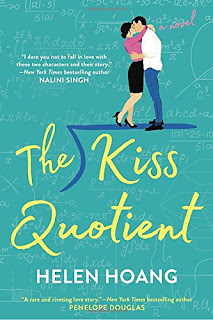 Stella Lane, a successful single econometrician who has Asperger’s, has been informed by her mother that she is ready for grandchildren. Stella--who would normally appreciate the head’s up to prepare for new situations she doesn’t like or at the very least is uncomfortable in--has a problem. She is horrible when it comes to men. Men don’t like to date her because she’s not feminine enough for them, she says the first thing that comes out of her mouth (and it’s never tactful), and she’s obsessed with work. Oh, and she hates sex. Everything about it. The invasion of personal space, the sweating, the French kissing that reminds her of pilot fish, the overwhelming colognes, and most of all, how she shuts down during the act and hopes they finish soon and leave.

And if she’s not good at sex, she’s hardly going to find that man to provide the grandchildren her mother wants, though she’s not all too sure she wants one of those either. They’re messy, sticky, touchy-feely little creatures. What she’d like is to work in peace 24/7, but apparently that’s socially unacceptable.

However, there’s a co-worker Stella thinks she would like, but he’s not interested in her. And his suggestion to her--completely unasked for, mind you--is to practice having more sex because once she “likes it”, then men will like her. (You’ll be relieved to know this douche-canoe is not who she practices with.)

Still, Stella loves to solve a problem; and she’s willing to solve her problem of hating sex--she just needs to hire a professional. She decides that if she hires someone to have sex with her and teach her the basics, she will feel more confident about attempting to date her co-worker (yes, the douche-canoe). She hires Michael Phan.

Michael has the looks of a K-drama star and some martial arts skills to match; however, it is the kindness in his eyes that prompts Stella to hire him. Michael arrives to meet his client for the evening--sans cologne per request--and is surprised to find Stella needs to hire an escort in the first place. She’s beautiful, smart, sweet, and insanely sexy. Why would she ever need to hire a man? Once back in the hotel room, Michael is even more confused by her need to hire someone.

“You smell this good?”
“Apparently. You’re the first to comment on it.”
“I want this smell all over me.” As the words left her mouth, she worried she’d said the wrong thing. That statement sounded a little too personal, a little too strange. Would he notice how strange she really was?
He bent down so his lips hovered a hairsbreadth away from her ear and whispered, “Are you sure you’re bad at sex?”

But the situation unravels from here; and soon Michael realizes Stella is definitely not his regular sort of client. She will need a much slower hand when it comes to bedroom things. For her he is willing to break his “one-time” rule to give her a month’s worth of lessons. It isn’t long before Stella appreciates Michael’s kisses, his touches and closeness; and he finds himself feeling all sorts of things for a woman who is only ever going to be a temporary arrangement.

I wanted to read this book because it ticked several things for me: it had a diverse Asian American character (I love Jeannie Lin’s historical set novels and wanted a more modern situation) who had Asperger’s (which I had read The Rosie Project and loved--so I was looking forward to how this element would weave in this story); it had the complicated family dynamics that I gravitate to (the grandmother that lives with his family, the high expectations of your career goals from the parents, the constant criticism that everyone you bring home is not good enough); and it had Pretty Woman with a gender flip.

However I nearly abandoned the book three times in the space of the first twenty pages: the mother demanding grandchildren (even under the pretense of telling her now so she has time to prepare) felt grossly insensitive to Stella’s situation. At first I felt like her mother was treating Stella as someone who couldn’t be normal if she didn’t have kids or a man--which was not cool, especially if Stella wasn’t sure she really wanted either of those things. And Stella’s hiring of an escort to practice something she “hated” felt like it was going to be a rapey like book. Fortunately Michael proved himself to be a hero worth waiting for because at no point was he ever going to do anything Stella didn’t want to do; and it wasn’t long in his company, with his patient touches and gentle kisses, that Stella was a lot more interested in doing things that previously and UNDERSTANDABLY were undesirable to her before.

Both Michael and Stella are heartbreaking characters. I couldn’t help but love both of them immediately and love them both throughout the book. Stella’s self-loathing for her personality ‘quirk’ (as I think of it) makes her want to overcome it--or at least hide it at all costs--and the transformation throughout the book as she comes to accept it and how Michael accepts it without ever making her feel less than is the kind of love we all long for. Michael’s reasons for escorting are honorable as well as a way to metaphorically flip the bird to his father who abandoned his family. He needs lots of money, fast and consistently, and technically speaking this takes few hours of his time as he spends the rest of his life hiding his sideline job.

By the end of the book I loved Stella’s mother, as well as all of Michael’s family members (well, except his father who stays a jerk). Much like Pretty Woman, it all works out in the end. They both grow and become better people because of each other. They’re the kind of couple you believe in happily ever after for. Also, this book is hell-la funny. I was reading this book in the tub at one point; and I nearly drowned myself laughing when Stella hands over proposed lesson plans to Michael. If you read this in the tub: you’ve been warned.

In further good news, I found that Helen Hoang has a follow up novel coming out in January 2019, with another of the characters in the book. However, it’s not the hero I was hoping she’d write a book for. I’m rooting that Quan gets a girl...so here’s hoping there will be a book 3 as well. In the meantime, I’ve pre-ordered the next book and will tell you all about it when it’s time.
Posted by pjpuppymom at 12:30 AM