Terri Osburn is back with part two of her recent adventures in Europe. Click here to read part one!

Kiddo (that’s my 18 year old daughter) and I spent four days in London between the Paris and Berlin events. Thanks to my stellar travel agent, we landed in the perfect location right across the street from the Royal Mews and just a quick jaunt a block and a half up to Buckingham Palace.


We walked The Mall, the Strand, across the Waterloo Bridge, and gawked at Piccadilly Circus.


We rode the London Eye, marveled at Westminster Abbey and Westminster Hall (Big Ben is under renovation so we only got to see his face,) plus scored perfect seats to Hamilton: An American Musical at the newly renovated Victoria Palace Theater. (We did not throw away our shot! < had to do that.)


As if that all wasn’t enough, we took a day trip to Windsor. Y’all… I can’t even begin to describe how amazing this was. Nine days before the royal wedding and the place was practically empty. No lines, the weather was perfect, and I STOOD right where Harry and Meghan exchanged their vows. Needless to say, I watched the wedding from my couch and it was another surreal moment when everything looked familiar. I walked the hill Harry and William walked to enter the church. I went full tourist in St. George’s Hall, which is where the reception immediately following the ceremony was held. I took pictures of that beautiful statue of Queen Victoria, and still can’t believe I was there.


For a kid who grew up knowing her grandmother was born not far north of London, it felt like a homecoming. If I ever take the dive into becoming an ex-pat, that’s where I’ll land.

And back to Paris 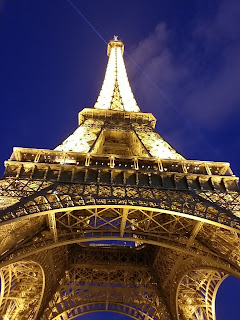 Because Kiddo couldn’t make the first few days in Paris due to college finals (she flew straight to London) we went back so she could see the city and we could do the tourist thing for a few days. Since we did a full day tour to Versailles and Giverny, we really only had one day in the city before flying home. Which means we didn’t see hardly any of the multitude of must-visit attractions, and yet, those couple of days were a spectacular way to end the adventure.


As one would expect, Versailles is breathtaking. I found it interesting to see both Versailles and Windsor within the same week, because though possibly the two most famous castles in Europe, they could not be more different. Windsor is older, but Versailles is more opulent. Windsor is still a functioning residence, Versailles is practically empty due to all the furnishings being sold to fund the revolution more than two hundred years ago.


Windsor has suits of armor, while Versailles has walls of marble. Windsor has an empty mote (fun fact: it was always empty) and Versailles has constant renovations that will never end (per our tour guide.) Windsor, for all its size and history is understated compared to the opulence of Versailles. I find the dichotomy quite interesting, and revealing about the monarchs who built and rule(d) from the two magnificent structures.


But I can’t forget the beauty of Giverny. Sad to say, I was not aware of this town’s claim to fame until my travel agent suggested the excursion, and I’m so glad she did. Especially for the sake of my art major daughter. Giverny is the town made famous by Claude Monet, and I highly recommend visiting his home if you get the chance. The gardens are wild and colorful, but the Japanese water garden that inspired his Water Lilies paintings are like stepping right into the historic canvases brought to life. A bit less peaceful thanks to the volume of tourists (especially young children there on field trips – which is so much cooler than any field trip I ever had) but still worth the visit.

Our last day in Paris was reserved for the Louvre. One of the first things you learn about this museum is that it’s HUGE. Originally a 12th century fortress and later expanded into a palace, this artistic marvel is simply overwhelming. The maps are not user friendly, so at any given time we had no idea where we were, but even still we managed to find the Venus de Milo, Nike of Samothrace (Winged Victory), and the Mona Lisa. What we stumbled upon without even knowing it was there is a mall. Yes, there is a mall in the basement of this historic landmark. Must fit the commercialism in there somewhere. (I bought an expensive purse – when in Paris…)

To put the perfect exclamation point on our trip, we arrived at the Eiffel Tower at precisely the moment she began to sparkle. A sight I won’t soon forget. Because the temps were cool and we arrived shortly before closing, we were lucky to find the place nearly deserted. Unfortunately, it’s also surrounded by corrugated metal, so not the prettiest picture from that close, but boy when you look up….

And so we wrap up 15 days in Paris, London, and Berlin. This was a trip of a lifetime for me, and I’m incredibly happy that I was able to take my daughter along. We spent a lot of time pinching ourselves, bonding over not understanding a single thing being said around us, and feeling unbelievably grateful for this opportunity. In the end, this was a trip made possible by the generous and loving readers who embrace and support this genre we call romance. So from both me and my daughter, thank you. I hope you all get to take a trip like this someday.


Thank you, Terri for sharing your wonderful adventure with us through both your photos and your words.

Readers, if money were no object and you could take a grand adventure anywhere in the world, where would you go? What would you most want to see?

One person who posts a comment will receive a signed copy of Terri's most recent novel, Falling Star. (US only) 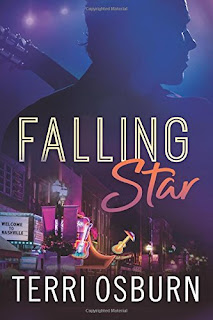 A country star looking for a comeback has one last shot at fame—and he might just have one last shot at love.
Naomi Mallard is a fixer by nature. And as PR manager for Nashville’s Shooting Stars record label, she’s facing her biggest fix: redeeming country music bad boy Chance Colburn. But in Naomi’s eyes, a police record and a stint in rehab are the least of Chance’s sins. He has spent his life running from demons and making tabloid headlines that have sent his career into a tailspin. Now he’s struggling to find his muse and maintain his newfound sobriety, all while counting on the woman he once betrayed to repair his tattered reputation.


Naomi is determined to keep their relationship strictly professional, but that’s not easy when an unexpected injury forces the former couple into disturbingly close proximity. Will mending their once-broken relationship be Naomi’s best save yet? Or will Chance’s past wreck any hope for a future together?