Review - - The Duke Buys a Bride 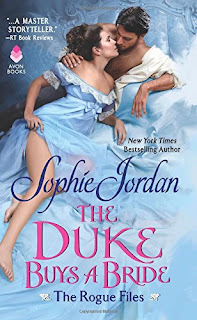 The Duke Buys A Bride by Sophie Jordan is a 5 out of 5 winner for me. I have to admit, as horrid as it sounds, I love me a bride sale. It is as awful as it sounds. A husband could ‘get rid of a spouse’ by auctioning her off. It was seen as the sensible thing to do as divorce was not an option within any class unless you were titled and could afford both the cost and stigma of it.


In The Duke Buys A Bride we find Marcus, Duke of Autenberry, a runaway duke of sorts. Marcus woke from a coma only to find himself comatose on the floor of a barn, taken prisoner for disorderly conduct. After paying his debt to society he tries to make his way to his estate in the Northern most part of Scotland, to the Black Isle.


Alyse Bell was married to Mr. Beard for seven years, keeping his house and raising his children when she was no more than a child herself. It was a chaste marriage which ran its course when a neighboring widow caught his eye. The way to dissolve the marriage was to auction her off on market day at an old, unused custom of a bride sale.


That’s what Marcus comes upon as he tries to leave the village and it enrages him to see a young lady leered and jeered at by the very people of her own village. He outbids everyone and gets a bill of sale and, unbeknownst to him, a wife. He is even more outraged and remains incredulous that it is even a true marriage but this is Scotland.


Alyse has no one to go to and no place to call home and so agrees to follow Marcus to his estate and become his housekeeper. Their journey is not an easy one. They have much to learn about one another and themselves. I enjoyed their journey and their love story! This is a great addition to Sophie Jordan’s The Rogue Files but equally brilliant on its own.

Posted by pjpuppymom at 8:42 AM