Review - - A Touch of Flame 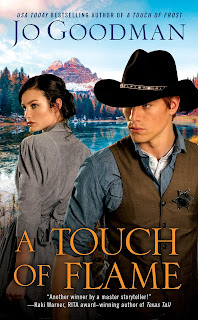 Newly elected sheriff, Ben Madison, has been sent to pick up the new doctor for Frost Falls, Dr. E. Ridley Woodhouse. It seems Doc, who retired in a hurry but reassured Ben that the new physician would be perfect for the role, neglected to mention one tiny thing: the new doc is a woman. Which, Ben will assure you, he noticed right away. Although Ben finds the new Dr. Woodhouse to be efficient and capable in her profession, the town itself is not yet willing to embrace the modern idea of a woman doctor. Even if it is almost the 20th century.

Dr. Ridley Woodhouse has her work cut out for her. She anticipated the town would not be eager to replace the vacancy that the well-beloved Doc had left, but she knew eventually they would have to come around. In the meantime, she would take a few key suggestions from the sheriff by making herself visible in the community and making house calls whether she’s been directly asked or not. Things might even go smoothly if not for one particular family, a married couple with children, whose husband is prone to domestic violence. The laws of the turn of the century aren’t protective of married women in abusive relationships; and both she and Sheriff Ben are frustrated by how little they can do to fix the situation. Still, sticking your nose where it’s not wanted--and without the law on your side--can be quite dangerous, and Ben soon confronts his greatest fear as he may lose the woman he has grown to love.

This book is intense with high drama (which Goodman is known for) and high stakes, but it was the humor that makes me give this one a Top Dish rating. Oh my God did I laugh. I laughed until I was sick. Ben Madison is the funniest, most unflappable male I’ve ever fallen in love with. From the minute he picks up the new doctor--who insists on being called Doctor Woodhouse--and allows the good doctor to assume he is just some lackey sent to pick her up at the station and not someone of such high station as the sheriff, to the time he has to help her dress for a funeral and is holding her corset, equating it to saddling a horse, to trying to guess what the E of her first name really stands for, Ben Madison is stubbornly good-humored and even-keeled.

Ridley is just starchy enough to not be so blessed with such a sense of humor, but this is easily forgiven since she pursued her degree in a field riddled with men who did not take her seriously, so she had to be twice so in order to get the respect she deserves. She is no nonsense, pragmatic, practical, and quick to call anyone on their bullshit. She’s just the kind of heroine we all want to be or be friends with.

This book has it all: sexy love scenes (that feel real and not gratuitous), constant real action that keeps a good pace without being exhausting, detailed setting and historical detail for any lover of historical novels, and well-rounded characters, not just the two main characters themselves. Jo Goodman makes it all look so easy; and it’s so readable it’s easy to appreciate. But as a writer, I know there was a lot in the background we don’t see that was nothing but hard work, as much as her own characters work, I’d say. It is a pure delight to read, a greater delight to admire.