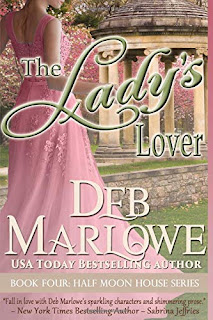 At Half Moon House, any woman can come to Hestia Wright for help. She’ll move heaven and earth to make things right for the downtrodden women of England—but she’ll never give her heart to another man.The Earl of Stoneacre has long admired Hestia. He can’t help but be smitten with a woman with her strength, honor and purpose—not to mention her legendary beauty. But she’s made her indifference plain, and Stoneacre is not a man to push in where he’s not wanted.Now they’ve been ordered to work together to defeat the Wicked Lord Marstoke once and for all. As the uneasy allies face untold peril and confront their pasts, trust and passion grow . . . but the greatest danger of all might be succumbing to a love that could never survive the obstacles in their way.

Hestia and Stoneacre are a great team, both professionally and personally but they can be much more if Hestia can finally set aside her emotional barriers and open her heart. Considering what she's been through, it won't be easy but even if she's able to, the obstacles blocking a happy ending for them are enormous. If they live long enough to even have the opportunity to make the attempt to overcome them. I liked them both and was pulling for them the whole way but, I have to admit, I had no idea how, or if, the author would manage to accomplish the task.

Marlowe expertly guides them through a gauntlet of danger, intensity, and more than a few twists that I never saw coming. Her insight into the characters, both good and evil, allows readers to fully appreciate them in all of their complexity and experience a range of emotions as the characters themselves do. The story flows at a good pace and held my attention throughout. I couldn't wait to flip each page to discover what would happen next while at the same time forcing myself to go slowly so as to savor each nuance. It's a compelling story that brings the Half Moon House series to a fitting conclusion.

Fans of the series will rejoice in Hestia and Stoneacre's story while those new to the Half Moon House will likely be downloading the first three books as soon as they finish. Marlowe has crafted The Lady's Lover in such a way that it's entirely enjoyable as a stand-alone story though it's my opinion that readers will have a deeper understanding of the characters and a more thorough appreciation of the events in this final chapter if they have already read the first three books in the series: The Love List, The Leading Lady, and The Lady's Legacy.

A Message from Deb Marlowe

The Lady’s Lover is the last book in the Half Moon House series.  This is going to mean quite an adjustment for me.  I came up with this idea years ago and my publisher was not interested.  A heroine who was ruined?  A storyline that arcs over multiple books?   It’s not your run of the mill Regency Historical.

But I wanted to write it.  Hestia Wright was in my head and she wanted her story told.  I wanted to tell it too.  And so I have.

In that time, the circumstances of ruination did not matter, not for the woman.  The wicked, serial abuser of a marquess goes on his way, but the girl he tricked and abused?  She’s labeled a fallen women.  She’s called worse, by Society and even family.  But Hestia Wright is strong of mind and heart.  If she was going to be called a whore, she was going to become the BEST ONE EVER.  And so she does.  In the first books of the series, we see her story play out in her journal entries.  We know she has become famous and wealthy and influential.  And we know that any woman can come to her at Half Moon House and ask for her help.

For three full novels and seven short stories and novellas, we’ve seen her big heart change lives.  And now it is time for Hestia’s story.

I felt the pressure.  I wanted to give her a story worthy of her journey and her spirit.  I had to make sure the wicked Marstoke got his due, at last.  I love the book, and I hope you will too!  I’m very excited that you all can finally read it!

And now that the Half Moon House series is done, I’m moving on to a new one!  Something a bit lighter this time, but I am having great fun with the Unconventional Courtships and hope you’ll be seeing them all later this year!

But first, I’d like to offer up a couple of prizes.  If you are a fan of the Half Moon House series, I’ll randomly choose a commenter to get a digital copy of The Lady’s Lover.  And if you are just starting the series, then I’ll randomly choose a commenter to receive a digital copy of the first book in the series, The Love List.  Just let us know in the comments below which one you are interested in!
Posted by pjpuppymom at 12:30 AM