Tour Review & Giveaway - - No Other Duke But You


No Other Duke But You
by Valerie Bowman
Playful Brides - Book 11
Publisher: St. Martin's
Release Date: April 30, 2019
Reviewed by PJ 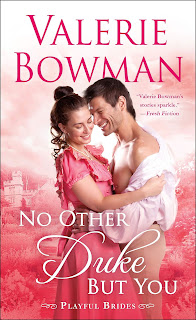 Lady Delilah Montebank has her marital sights set on the Duke of Branville. There’s just one problem: he barely knows she exists. But no matter, she’s got a plan to win him over with her charm, her wit—and perhaps the love potion she has in her possession wouldn’t hurt her cause...
Lord Thomas Hobbs, Duke of Huntley, thinks his best friend Delilah’s quest to become a duchess is ridiculous. He’s always said he’d rather give up all the brandy in London than commit to one person for life. Besides, he knows that Delilah’s love potion can’t possibly win over Branville…since she accidentally gave it to him instead. But perhaps this is the excuse he needs to show her he’s always loved her...
Delilah can’t believe she gave the potion to the wrong duke. Then again, Delilah could do a lot worse than win the hand of her handsome best friend. Could it be that the right duke has been before her eyes all along?

I enjoy a good friends to lovers trope and that's what Valerie Bowman brings readers in this final book of her popular Playful Brides series.

Thomas and Delilah have been best friends since childhood. There's nobody they're closer to or more comfortable with than each other but they've never moved their relationship beyond friendship. Until now. Faced with a forced marriage to a man she finds repugnant, Delilah is determined to thwart her abusive mother's plans by landing the most eligible bachelor of the season, the Duke of Branville, a man she doesn't even know. Thomas, on the other hand, has been in love with Delilah for years and has been waiting for her to grow up and realize she returns his feelings. Her plan to land Branville throws him for a loop and sets in motion his own plans to win the hand, and heart, of his best friend before he loses her to someone else.

Of course, many of the couples from the previous Playful Brides books are right there in the middle of things but which duke are they helping Delilah land? And what about the other players in this comedy of errors? Thomas loves Delilah but Delilah is determined to land Branville though she has no feelings for him. Branville is smitten with Delilah's friend Rebecca who is smitten with Thomas which is causing Delilah to look at her best friend in a new way. And that's just the beginning of the romantic misadventures. It's all fast-paced fun, with plenty of twists and turns, misunderstandings, ill-advised schemes, villainous parents, and a love potion that more than one person is trying to get their hands on.

Thomas and Delilah are vividly portrayed characters I easily connected with, especially in the first half of the book. I adored Thomas and was in his corner the entire way. Delilah tested my patience a bit in the second half of the book and after one particular scene, I was not pleased with her but I'm happy to say she won me over in the end. I would have enjoyed a bit more time devoted to the evolution of Thomas and Delilah's relationship though, as a fan of the series, I loved catching up with so many characters from previous books.

If this is your first Playful Brides book, there's a good chance you'll feel a bit confused while trying to sort out the very large cast of characters popping in and out of the story with regularity. For that reason, I don't really recommend it as a standalone story. As a send-off for a series, though, it's great fun that left me with a satisfied sigh and a wide smile. I'm looking forward to whatever Valerie Bowman brings us next!


Have you read any of the books in the Playful Brides series?

Do you have a favorite story or couple in this series?

Do you enjoy friends to lovers stories?

One randomly chosen person who leaves a comment on this post before 11:00 PM (Eastern), May 3 will receive a print copy of No Other Duke But You. (U.S. only)