Review - - Into the Fire 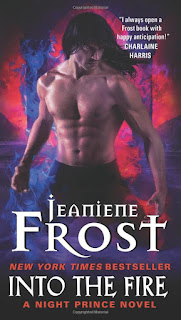 Into The Fire is the fourth and final novel in Jeaniene Frost’s Night Prince series.  While the book can be read standing alone, the emotional conflicts will have more resonance after reading the earlier books.  This review is written with deliberate avoidance of spoilers for the earlier books.

The series hero is Vlad Tepesch, the vampire who inspired the Dracula legend and really, really hates to have that mentioned.  He has similar abilities to the vampires in Frost’s Night Huntress series, with a bonus.  Vlad can wield fire as a weapon.

Leila, the series heroine, has paranormal abilities.  She can channel electricity, which isn’t always a plus because she has electrical current building in her system all the time and must release it periodically.  In addition, she can read anyone’s deepest secret at a touch and can pull psychic impressions from objects.

Leila and Vlad meet in the first book, Once Burned, after vampires kidnap her and force her to use her psychic abilities to locate Vlad by touching objects.  Leila succeeds, but an unexpected mental connection forms between her and Vlad.  He then comes to rescue her.

At the beginning of Into the Fire, enemies of Vlad have realized that Leila is psychically linked to his stepson, Mircea.  Anything that happens to him happens to her, and vice-versa.  When his captors carve a blackmail demand into Mircea’s flesh, identical wounds appear on Leila, a demand for Vlad to do their bidding.

The rest of the book revolves around the hunt for Mircea and his captors.  Mircea is a necromancer.  Finding him requires moving among the magically gifted, people against whom Leila’s and Vlad’s abilities are of little use.  Their guide in this world is Ian, a flirty vampire with magical gifts he keeps secret because magic is forbidden to vampires.

The quest to find Mircea involves a lot of action and firepower, but its emotional heart is Leila and Vlad’s shared fear of losing each other.  Leila also fears what Vlad may have to do to save her, especially when she learns that Mircea’s captors are demanding that Vlad kill someone very close to them both and to Ian.

Horrified by the way Vlad responds to this demand, Ian makes a terrible bargain with a demon named Dagon, who has sought Ian’s soul for a very long time. This costly bargain, however, does nothing to locate Mircea.

The key to finding him and his captors lies in learning the truth about Leila’s heritage, which has been a bit of a mystery through the series.  Why did coming in contact with a power line give her these abilities? What other abilities does she have?  The answers aren’t always pretty.

Nothing comes easily in the Night Prince world, and everything has a cost.  That’s one reason the books are so gripping.  If no one were ever in true danger, the suspense for the reader would be minimal at best.

The book ends by wrapping up some other issues that have persisted through the series.  It closes with Vlad and Leila in a scene that provides a very satisfying farewell to this fictional world.