Review - - My One True Highlander 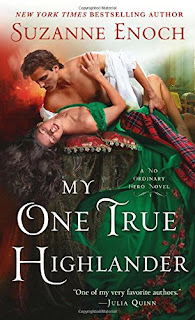 Scotland, 1812―Rugged Highlander Graeme’s loyalty to his clan means that their enemies are his own―even when that includes his neighbor, the Duke of Lattimer. It’s a fight he doesn’t relish, but when Graeme’s reckless younger brothers foolishly kidnap Lattimer’s younger sister, all bets are off…
Lady Marjorie Forrester may be aligned with the enemy, but capturing her puts Graeme squarely in the middle of a war. If he turns Marjorie over to his clan chief, she could be killed. If he lets her go, his brothers could face prison. In addition, the woman can’t stop trying to civilize the lot of them! What’s a Highlander to do, then, but keep the stubborn lass close…and explore the unexpected passion that develops between them? But how can Graeme protect Marjorie and his brothers when both Lattimer and his own clan are on the warpath―and will do whatever it takes to tear these two star-crossed lovers apart?


It's been awhile since I've read a book by Suzanne Enoch but My One True Highlander reminded me of why I've always enjoyed her novels. This is a fast-paced story with adventure, sizzle, family dynamics, clan feuds, a battle of wills, and plenty of humor. But while all that is appealing, it's the characters Enoch creates that are the heart of this book. She brings them to life, not in the way she describes them but by allowing them to show us who they are through their actions and interactions.

Graeme is my favorite kind of hero. He's rugged and untamed, willing to fight to protect his family, tenants, and land. He doesn't back away from responsibility. In fact, he's been responsible for raising his younger brothers since their parents died when Graeme was twenty. Yet, for all that he's a warrior, scenes with his youngest brother show he has a soft side as well. But his is a bachelor household and the introduction of Marjorie, first as an unplanned prisoner and eventually as more, brings about wonderful banter and a rousing battle of wills as the rough edges of the Maxton men (and boys) are slowly refined (but not too much) by a feminine touch.

Unexpectedly thrust from paid lady's companion to Duke's sister, Marjorie has spent the past few months living her dream though the reality isn't living up to her expectations. London, it seems, isn't quite ready to accept the fact that her former soldier brother is now a duke and Marjorie is now a lady, no matter how much money she now has nor how proper or perfect she is determined to be. When Graeme's younger brothers kidnap her from an inn near their home while she's enroute to her brother's wedding, they have no idea of the havoc one ticked off woman can cause. Marjorie is not about to let some uncivilized Scots derail her long-held dream of being accepted by the ton, even if the youngest one is capturing her heart with his sweet nature and the oldest is capturing the interest of her other body parts. I admired Marjorie's determination, sympathized with her confusion over where her happiness lay, and cheered her on every step of the way.

Enoch has surrounded Graeme and Marjorie with a rich and colorful cast of secondary characters, including a lovesick blacksmith, starchy lady's companion, nasty villain, and three younger brothers who are all vividly realistic, adding texture, humor, and poignancy to the overall story.

My One True Highlander is the second book in Enoch's No Ordinary Hero duet but stands well on its own. However, I enjoyed it so much that I immediately downloaded the first book, Hero in the Highlands and am looking forward to reading the story of Marjorie's brother, Gabriel and his English-despising, Scottish heroine, Fiona.