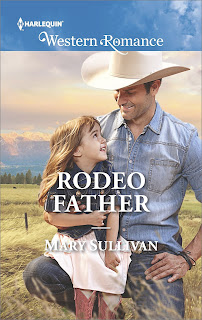 Travis Read never wanted to settle down anywhere—with anyone. He's in Rodeo, Montana, just long enough to fix up a house for his sister and he'll be on his way. Then he meets Rachel McGuire. Beautiful and kind—and with magnetic whiskey-colored eyes—Rachel is everything that Travis could want. Except that Rachel is also very, very pregnant.
A struggling widowed mom, Rachel wants to give her family the stability she's never had. Travis dashed those hopes by buying her dream house. Okay, she can start over. But she wasn't counting on such a fierce attraction between them. And this cowboy was never meant to settle down… 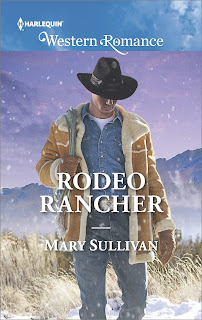 Visitors are rare at widower Michael Moreno's Rodeo, Montana, ranch. When Samantha Read and her two sons turn up, seeking shelter in a snowstorm, his kids are ecstatic. Michael is less enthusiastic. Sammy's sophisticated city vibe seems out of place in his country home. But even he can't deny that the bubbly beauty lights up the whole house.
Though Sammy doesn't know much about ranching, she recognizes an aching heart when she sees one. Michael and his kids could use some cheer, and she's determined to make the most of their time together. But as the heat between Sammy and Michael threatens to melt the snow, Sammy wonders if Michael's heart could be thawing, as well...

I've been a fan of Harlequin romances for years but didn't discover Mary Sullivan until last spring. It only took that one book (Cody's Come Home - Harlequin Superromance) to move her from unknown author to Harlequin auto-buy. This year, Sullivan moves to the Harlequin Western Romance line with her new Rodeo, Montana series, a collection of stories about the hardworking people in a small Montana town that will tug at your heartstrings and leave you smiling. Each of the first two books can stand on its own but, as part of Samantha's story is told by Travis in Rodeo Father and the ramifications play out in Samantha's book, Rodeo Rancher, I think readers will have a clearer understanding of events and a richer appreciation of Samantha's story if they read the books in order.

In Rodeo Father, Sullivan pairs a kind, caring man who, because of his childhood, doesn't believe he's cut out to be a family man, with a struggling widow who has an adorable three-year-old daughter and another baby on the way. I loved these characters. Neither Rachel nor Travis has had an easy life but neither is wallowing in self-pity. This is especially true for Rachel who, because of her circumstances, certainly would be justified in a good melt-down. Both are good, caring people who put others before themselves. Their actions speak louder than words and show their true character. Though Travis could have easily become the knight-in-shining-armor rescuer of the story, Sullivan keeps these two on an even keel with "rescuing" on both sides which it made it all the more enjoyable and satisfying in the end. It should be noted that I'm a pushover for adorable kids and Rachel's daughter is one of the best. She plays a vital role in this story, capturing many hearts, mine included.


Samantha "Sammy" Read, the heroine of Rodeo Rancher and sister of Travis Read (Rodeo Father) has a zest for life and a penchant for landing in trouble. After blowing the whistle on her crooked boss who swore retribution, Samantha and her sons left Las Vegas and are on their way to the home her brother bought for them in Montana. Sammy's showgirl looks may give people the wrong first impression but this whip-smart woman has a caring heart, a quirky sense of humor, and will do anything to keep her sons' safe and happy. When she sweeps into Michael's home in the middle of a blizzard, the poor man doesn't stand a chance.

Michael Moreno is a hard-working rancher struggling to move forward after the death of his beloved wife. He's a loving father whose children mean the world to him but the joy left his life - and consequently, his children's lives - when his wife died. Sammy is like a breath of spring air, bringing light and laughter to a colorless existence. Sullivan does an outstanding job of showing the push and pull of a man frozen in grief and a woman hesitant to hand her heart over after having it broken then spices it up with four realistically crafted, steal-your-heart children who bring their own issues to the table. Sammy breathes life, hope, and fun into the hearts of Michael and his children but he returns the favor by by bringing love and stability to Sammy and her sons and helping them heal the hurts of the past. I cheered for this couple and this family every step of the way. These are people who deserve love and happiness. I appreciate the gradual hand Sullivan took with their relationship. It's realistic, with steps forward and back, and, just like Sammy, left me singing a happy tune at the end.

Mary Sullivan's next book, Rodeo Baby publishes on July 1. I already have it on pre-order and am looking forward to my next visit to Rodeo, Montana!

Posted by pjpuppymom at 2:45 PM