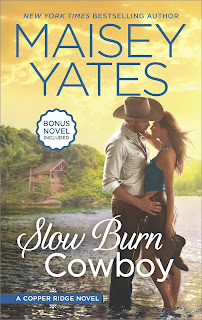 Slow Burn Cowboy begins and ends with a casserole. You know the kind. A mashup up of all the favorite things: pasta, cheese, meat, and enough sauce to spice things up. This book is very much a casserole, putting together all the things a romance reader loves and leaving you so satisfied and content, you immediately want another serving, if you’re the kind of glutton I am.

Rancher Finn Donnelly and store-owner Lane Jensen have been best friends since she came to Copper Ridge ten years ago--Platonic with a capital P. They’re happy to continue on this relationship of mutual convenience: he’s her handyman and she cooks, until that is Finn Donnelly’s idyllic life goes in the crapper. The ranch he’s work on for twenty years, his grandfather’s, has just been left to him and his three half-brothers. Half-brothers who haven’t set foot on the farm in years and certainly haven’t poured the blood, sweat and tears he has into it. To make matters worse, his half-brothers aren’t content to just take the money Finn is offering to go away, each having their own reason for needing to stay at the ranch.

To say the control-freak, suffer-in-silence Finn is unhappy with his new roommates and life is an understatement. So much so that his ability to keep Lane at arm’s length gets flung to the wayside. Now he wants to be friends with benefits, starting immediately. Lane, who depends on Finn’s stability and friendship, is desperate to keep their relationship strictly without sex. She needs the one true thing in her life to stay true, especially since she keeps seeing interviews of her ex-boyfriend, Senator Cord McCaffrey, on TV, reminding her of a past that isn’t buried nearly deep enough for her peace of mind.

What unfolds is one devastating emotional wild ride as the two friends-turned-lovers break down each others’ walls, walls they’ve both spent nearly half their lives putting up and keeping in place. When these two fight, they go down swinging. Both Finn and Lane have tragic pasts that leave you understanding why they don’t want to risk everything again, but hoping that they will be able to finally reach each other for a much deserved happy ending. Every love scene that unfolds is necessary and leaves each of the lovers in a different place than they were before, forever changed. They are naked with each other a lot, and not just for the sex.

This book is a great addition to the Copper Ridge series, and an opening to a new quartet of stories featuring the Donnelly brothers. With meaty emotional scenes, cheesy good familiar tropes (i.e. friends to lovers, two broken people healing each other’s wounds, girls’ night out scenes, brotherly bitch-fests), and a familiar beloved setting in Copper Ridge with other characters we’re familiar with (i.e. pasta), this book is one tasty casserole.

To those who might be as nitpicky as me, I did rather question at first Lane’s hesitation to move the relationship to a non-platonic one, even after her deep dark secret is revealed. Eventually, through more scenes where Lane and Finn have their fights (and reveal deep things), I understood her better and felt it worked. (And I imagine there will be those who will look at Finn’s deep dark secret and wonder why he played so close to his chest.) They are their own people; and Maisey Yates crafts them well. But the thing that actually bugged me were the typos. If typos don’t bother you because you have better things to be mad at, this critique isn’t for you--it’s for those of us who do get mad enough that we’ll set a book aside and move on. I just want to say, typos aside, the story is worth the read. The fight scenes and real emotional talks Finn and Lane have are some of the best I’ve ever read in romance. It’s real and it’s moving. There are those who say romance novels ruin readers--women who want to be in relationships, that this is not how real life is--but I think they teach us how to be better communicators and show us how risking everything is worth it, for love and for yourself. This is definitely one of those books.


Other stops on the Maisey Yates Slow Burn Cowboy Tour: