Sara Flynn is a bright new voice in contemporary romance. Her debut, SOLACE ISLAND, drew me in with likeable characters, vibrant descriptions, heartwarming romance, and a tightly-woven thread of suspense that kept me guessing until the very end of the book. Flynn packages it all in a fast-paced story with enough twists and turns to keep me on the edge of my seat, and a satisfying conclusion that has me eager for more. I can't wait to see what this talented new author brings us next! 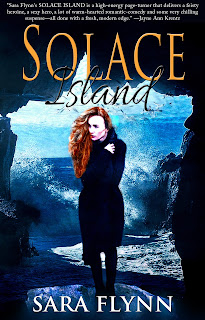 Solace Island, a peaceful island village . . . or so Maggie thinks . . .
When Maggie Harris’s fiancée dumps her on the eve of their wedding, Maggie retreats to a small island in the Pacific Northwest with her sister Eve to recover from the stunning betrayal. At first Maggie resists Eve’s efforts to rope her into staying in Solace Island, launch their own local bakery, and fix her up with their incredibly handsome neighbor, Luke Benson.
But Maggie is gradually drawn in by the sexy baker and his bear-sized dog. Luke scores his first point when he shares his space with the sisters at the local Solace Island Saturday Market, where he sells his breads. But is this guy with a disarming smile, uncanny wealth and suspiciously hard body a man Maggie can trust? Just when she begins to brush off her misgivings, a car tries to plow into her in town, and Luke springs into action in strange military precision. Who is this guy really?
Luke thought he’d left the high risk security business behind. But he can’t stand by while Maggie’s life is threatened. Luke insists on moving the sisters to his house, taking Maggie into his bedroom—and into his heart. But someone wants Maggie dead. Will she give him the chance to prove to her she can find more than mind-blowing sex in the safety of his arms?

I get to travel to far off lands. One sees a country differently when one is living and working there. The local film crews know about the delicious off-the-beaten-track restaurants, the treasures. On my off time I walk a lot, ferreting out  the best bakeries, fish stores, and where to get the freshest produce.

When my children were small, my sister, Becky, would come on location with me and help me take care of my children. The added benefit was lots of cozy sister time, and it helped cement the strong bond we already had. I am filled with memories of my children and Becky. On Long Island, dancing on the lawn of the house the production company rented for me, U2's Joshua Tree spilling out of stereo speakers. It was dusk. None of us had ever seen fireflies before. They started twinkling on and off, like tiny fairy lights, and we ran outside. My children so small then, with that sweet-smelling, downy-soft, child-hair and magic in their eyes. Arms and legs flying as we danced with the fireflies, celebrating life and being together, the ocean lapping gently against the shore.

I get to climb into my characters' lives. Learn from their mistakes, and grow from being in their presence, in their skin. My acting teacher, Peggy Fuery, always said, "If there is character you have a lot of judgment about, that is the part you should embrace. Because the characteristics that we dislike violently in other people are what we are struggling against within ourselves. Everyone has the capacity to do anything. Be anyone." We all have the saint and the worst kind of monster lurking inside. If we don't acknowledge the dark, then it can devour us. We need to allow both the dark and the light. I have learned and grown so much be being an actor. I think it has helped form me into who I am today.

I have gotten to meet talented, amazing people. Have worked and played with them.  Sometimes I am just filled with wonder. I grew up in a challenging, hard-scrabble home. The highest I thought to dream was to someday work in a candy store. I would give free candy to henry children like me who couldn't afford more than to look through a window. I don't own a candy store, but I still can't get over the thrill of walking into one and choosing what I want. And that I became a movie star? People wanted to take my picture and thought I was famous? And paid me lots of money to pretend to be someone else? That just blew my mind.

Working in the movies has afforded me all sorts of unique memories. Like when I was rehearsing The Two Jakes at Jack Nicholson's house. We were reading through the script. I was a little nervous but not showing it, other than I kept sipping on water so my words wouldn't sound like my mouth was dry as chalk. It was. At that time, Jack Nicholson was the hugest male star around, and I was going to be shooting a movie with him. I was sitting on his white leather sofa, and he was looking at me, in that way that he has that makes knees weak and hearts beat in overtime. If it had been you on his sofa, and he was looking at you like that, well, you'd have been gulping down the water, too.

The problem with my mouth moistening solution was...after an hour or so, I needed to use the facilities.

I rolled my eyes.

He laughed. "Down the hall and on the left." His eyes were gleaming. It made me nervous. Was the cast going to be able to hear me pee? Or, was he doing a guy thing and imagining me with my pants down?

Even though these thoughts were going through my mind, I acted cool as a cucumber. I went down the hall, entered the bathroom, and locked the door. A normal-looking bathroom. I pressed the nail my my forefinger against the mirror and was relieved to discover that it was a regular mirror, not a two-way one. I checked the air vent to make sure there were no hidden cameras tucked inside. Nope. All clear.

So, what was Jack so gleeful about?

I shrugged. Guess I would never know.

And then, I lifted the toilet seat.

There was an enormous rattlesnake embedded in the clear Plexiglas toilet seat. It's fangs were bared, its flat head arched back as if the second I lowered my bottom to the seat, it would strike.

Ahh...Now I knew what Jack was so delighted about. He expected me to flee from the bathroom, screaming bloody murder.

Ha! Jack didn't know I came from heartier stock than that. Heck, when we were little, us kids killed a much bigger rattlesnake than that with a big stick. And then we brought it home, gutted it, and cooked it up for dinner. Used a little margarine, onions, salt, and pepper. It was tasty.

So I just covered up that rattlesnake with a little toilet paper, relieved myself, flushed, washed my hands, and returned to the living room where Jack was waiting excitedly for the fun to begin.

I still get startled sometimes, thinking about how my life has turned out, when I see a child in a schoolyard with ill-fitting clothes, tangled hair, and hungry eyes. That was me!

Not in my wildest dreams would I ever have imagined the life that I've had. I got to be a dancer in New York, an actor in Hollywood, a writer, too. First, in regular fiction and screenplays, and now...pièce de résistance... I'm a romance writer! It is SO much fun! People in the romance community are so kind. I wish I had found my romance writer's voice years ago.

But maybe it's just as well that I didn't, because all these years I've been writing and developing my craft. I've been collecting memories and material. Harvesting so that I have a wealth of experiences to draw from. And not just from being on movie sets. I've worked painting post offices, at a department store selling hats and gloves, sliced meats and cheeses in a delicatessen. I've been a waitress working on my feet until two-thirty in the morning. I've milked cows, taken care of more than a hundred chickens, collected their eggs, and shoveled their incredibly toxic poop. I've been a full-time mom, a part-time mom, a grandma, a wife, and an ex-wife, too. I've been a good friend and sometimes a negligent one. And what does all this mean? The trophies and the disappointments, my triumphs and failings? Well, my experiences have made me who I am today. They are like the multitude of ingredients one needs to make a tasty soup. That's what my romance writing and I are drawing on, a tasty soup of experience!

And now I get to add to my memory bank being a romance author. Getting SOLACE ISLAND blurbed by my romance idol, Jayne Ann Krentz, is going to be a tough one to beat. I have read every single one of her novels at least once. Maybe someday, if I'm very, very lucky and work really, really hard, I'll be able to do another starry-eyed debut romance author that same courtesy. In the meantime, I hope you enjoy SOLACE ISLAND and Book 2 in the series, SOLACE STOLEN, which will be out in January 2018.

After traumatic events in their lives, Maggie and Luke both end up on Solace Island where they find satisfaction and joy in their new careers as baker and breadmaker. What would you want to do if you had the opportunity to start over with a new career?

Two people leaving a comment before 11:00 PM, May 5, 2017 will receive a Kindle copy of SOLACE ISLAND from me.

Two people leaving a comment before 11:00 PM, May 5, 2017 will received a published copy of SOLACE ISLAND from Sara Flynn.
(U.S./Canada) 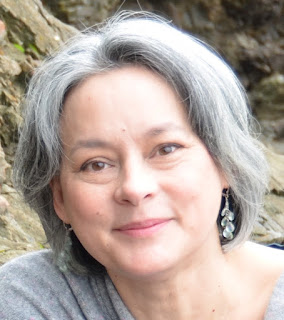 Sara Flynn may be best known for her acclaimed Golden Globe-winning lead performance in the movie “Agnes of God. Other screen credits include, The Big Chill, Valmont, and more recently, Bomb Girls, and Netflix’s movie War Machine, starring Brad Pitt. However, Meg Tilly is taking on an exciting new persona these days, as debut romance novelist Sara Flynn. After successfully publishing six standout young adult and literary women’s fiction novels, the award-winning author/actress decided to write the kind of books she loves to read—romance novels. Her first romance, SOLACE ISLAND, is debuting at the 2017 RT Booklovers’ Convention in Atlanta, where Meg, as Sara Flynn, will co-emcee the popular romance fan convention’s awards ceremony. Set on an island in the Pacific Northwest, SOLACE ISLAND tells the suspenseful story of a woman, dumped by her business partner/fiancé during her bachelorette party, who discovers a rewarding new career, romance, and threats on her life in an idyllic vacation community. Two more Sara Flynn romances set on Solace Island will follow. Tilly has three grown children and resides with her husband in the Pacific Northwest. She is currently at work writing that second Solace Island novel.