Review - - The Light in Summer 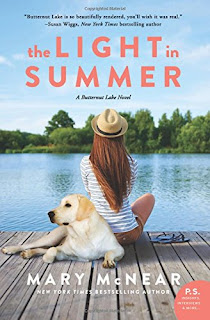 Single mother Billy Harper and her son Luke, eight at the time, moved to Butternut Lake, Minnesota, five years ago and found life good in the small town. Billy enjoyed her job as librarian and Luke made a couple of friends from whom he became inseparable. But things have changed in the past year. Billy’s father’s death has been difficult for her, but the loss of his grandfather, the only father figure in his life, has transformed Luke from a good kid and a lovable companion into a surly teen who avoids conversations with his mom, hangs out with a different set of friends, and gets suspended from school. Billy is worried. Even rereading her beloved Jane Austen novels provides little solace from her concerns.

Billy was still a teen herself when she gave birth to Luke. She accompanied her dad on a trip to an Alaskan fishing lodge where she met Wesley Fitzgerald, a good-looking fishing guide only a few years older than Billy herself. What began as flirtation and a spontaneous invitation to a party ended with eighteen-year-old Billy no longer a virgin. A month later, Billy realizes she is pregnant. Wesley has moved on, and Billy is left to bring up her son, with a great deal of help from her parents in the early years. When Luke was younger, his questions about his father could be answered with the minimal information Billy had, but thanks to a private investigator hired by her father, Billy knows more about her son’s father now. And Luke, filled with angst and anger about his fatherless state, will no longer be satisfied with the old answers to his questions.

Cal Cooper is at a turning point in his life. He has filed for divorce from his wife of five years after he discovered a deception he could not forgive. Differences about the kind of buildings to design have also led him to dissolve his partnership in the Seattle architectural firm he helped found. Cal hopes that a summer in Butternut Lake where he spent his childhood summers will give him the time and space to find a new direction for his life. He rediscovers the passion for building homes that led him into architecture, and he meets Billy Harper.

Neither Billy nor Cal is looking for a romantic relationship to further complicate their already complicated lives, but they keep running into each other. The combination of comfort and chemistry they share is rare, and they are both smart enough to know that. But the entry of Wesley into Luke’s life leaves Billy anxious, and Cal must make some decisions about his professional life before he and Billy decide where their relationship is headed.

The Light in Summer is the fifth book in McNear’s heartwarming Butternut Lake series. Like the other books in the series, it is a quiet book with likable characters and credible conflicts, one of my favorite types. The story illustrates the choices-have-consequences theme on multiple levels. Billy learned that lesson young when she chose to lie to Wesley about her experience and her protection from pregnancy and it is reinforced when she delays telling Luke about his father.  Cal recognizes that his complacency played a role in the failure of his marriage. Luke not only must deal with suspension and loss of privileges because of his bad choices, but he also learns from the more serious consequences his troubled friends face.

Fans of the series will enjoy the appearance of characters from earlier books. Cal is the brother of Allie Cooper Beckett Ford whose story, Up at Butternut Lake, began the series, and I particularly enjoyed the glimpses of Allie, Walker, Wyatt, and Brooke. I also thought it was a great touch that Billy and Cal meet at the wedding of Daisy and Will. Despite all these connections, The Light in Summer can be read as a standalone. If you like the small-town series of Robyn Carr, RaeAnne Thayne, or Sherryl Woods, I predict you will enjoy this book as much as I did.
Posted by pjpuppymom at 3:00 PM