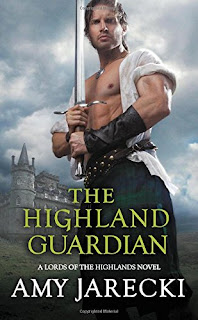 The third in Jarecki's Highland trilogy, THE HIGHLAND GUARDIAN introduces Reid, the Earl of Seaforth, and Audrey Kennet, an English heiress, who is as shy as she is rebellious. On a return trip from France, after meeting with King James of Scotland (a treasonous offense), Reid's ship is attacked, and Audrey's father, Nicholas, is killed when the ship is sunk off the coast. With his dying breath, Nicholas begs Reid to look after his daughter, and Reid agrees.

Reid's belief he has taken on the guardianship of a wee lass is abruptly corrected when he meets his nineteen-year-old ward, the fair and beautiful, Audrey. His plans immediately turn to finding a husband for the girl so he can go back to his true duties, the cause, putting the rightful heir, King James, back on the throne of England and Scotland. Audrey, recently back home from completing finishing school, is devastated to learn her beloved father has died and horrified to learn she is to be married off to the nearest man with a pulse as soon as it is convenient for the earl.

Of course it proves challenging to marry off a gorgeous nubile young woman with more money than Croesus, and there are various issues that cause the young couple to be in each other's company time and again until the unthinkable happens, and the earl realizes he's in love with his own ward. Audrey is equally vexed when she realizes the same for herself. And because the road to true love hasn't run smooth so far, Reid also has to wheedle himself out of a lifelong family betrothal in order to marry the woman he loves. Breaking off a betrothal with the excuse you're in LOVE is always eyebrow-raising prior to 1850, and breaking off a betrothal to say you're in love with an ENGLISHWOMAN when you're a Jacobite Scottish nobleman is akin to sheer lunacy. Still, not impossible.

For me, the story is 2 stars - and I feel I must explain why the story was not my cup of tea. I started
reading this book no less than three times (the third in which I 'finished' only to complete the review.)
While the young and noble Reid was no challenge to like and fall in love with, I found Audrey more
frustrating. While she is a sheltered, spoiled young heiress, doted on by her father, she feels younger than her nineteen years, especially nineteen year old women in the 18th century. While Jarecki does a wonderful job of creating heroines who are authentic to their time period (I enjoyed the first two in the trilogy), I felt Audrey was more improbable. While it's possible to be painfully shy, yet bold while riding a horse or picking out a heartstopping red ballgown, it felt improbable. I don't know - the painfully shy factor seemed incongruous with someone who was loved and spoiled by her father, encouraged to think and have opinions, and seemed to think it was shocking her father was planning to find her a husband, when she's nineteen, the only child of a coal-mining fortune, and living in a century where that was what women grew up knowing was their outcome as soon as they were of age. Someone who is as intelligent as the heroine proves to be cannot be that dim-witted about the realities of her time.

One of the first things she does when introduced in the story is ride off alone on her trusted gelding to clear her head. She doesn't take a groomsman with her to protect her. She doesn't tell Reid she's going out - she's escaping him - and no one questions it. Not impossible, I remind myself, but improbable. She could be kidnapped for ransom or killed by outlaws, but it seems not to cross her mind at all. In fact, she doesn't learn from the first time she rides out alone - she does it again a chapter or two later, but this time Reid happens upon her and tells her to take a groomsman with her from not on. Perhaps I've spent my time reading too many Regency novels where if an unmarried girl leaves her house without the proper retinue of protectors and keepers, her reputation is mud, and maybe things were more lax a hundred years prior, but I don't think so. If she had been anyone but the rich sole heiress of a recently deceased businessman, I would have bought into it more. After all, in the first of Jarecki's books, the heroine travels a lot by herself...but her family is poor and she is the breadwinner. She also has a few more skills for protecting herself than Audrey does.

The camel straw for me was when Audrey was afraid that the ball she was going to would be a disaster because she couldn't dance and no man would possibly find her desirable. She. Who is a fair English rose...and the heiress to a king's ransom? Granted, Audrey had a few mortifying experiences at Court and some balls she was forced to attend that would lend to her mindset, but in a world - which Jarecki alludes to with the scene with the solicitor - where women should be rarely seen and not heard, a beautiful young woman with a fortune and who is so shy she doesn't like to talk or share her opinions can only seem like a 18th century man's wet dream in my opinion.

However, my issues with how young women should behave - when I'm well past nineteen and unwilling to dwell on what a prat I could be like - is mine; and as a third in the trilogy, it ties up loose ends well enough, closing a door on an interesting chapter in Scottish history. Reid is heroic and delightful; and for some, Audrey's shyness will be a welcome change from the slew of Lara Croft-like heroines who star in many current historical romances.