The Romance Dish is tickled pink to be part of the exciting 2017 Berkley Bookmas!  I'm especially delighted to be hosting today's spotlight author, Anne Gracie with an excerpt from her upcoming April 2018 novel, Marry in Scandal. This is the second book in Ms. Gracie's Marriage of Convenience series and one I'm especially eager to read. If you haven't read the first book in the series, Marry in Haste, I highly recommend it. (Read our Just Between Us review here.)

Berkley Bookmas is filled to the brim with exclusive content from authors like exclusive excerpts, deleted scenes, author recipes, and more! Check out the calendar of events below:

“I have secured a duke for the opera tonight,” Agatha, Lady Salter announced with an air of triumph. Bone thin and immensely elegant, her steely silvery hair intricately coiled, piled high and bound into a kind of turban, she fingered her lorgnette with long fingers and eyed her three nieces with a critical gaze.
Lily Rutherford, Lady Salter’s youngest niece, swallowed. She sat with her sister Rose on the chaise longue facing the old lady. George, technically a great-niece rather than a niece, lounged casually on the armrest of a nearby chair.
“Do dukes sing?” Rose idly twirled her fan. “I had no idea.”
“Don’t be facetious, Rose,” Aunt Agatha snapped. “You know very well why I have arranged this opportunity—it’s for you in particular.” She added, “As well, he is bringing two friends, one of whom—”
She broke off, her eyes narrowed. Lily tensed as the old lady raised her lorgnette. It was a warm day and Lily’s thighs were sticking together, but she didn’t dare move. Aunt Agatha despised fidgeting.
But her gaze came to rest meaningfully on George, who gave the elderly dowager a bland smile in return and stayed where she was, one leg swinging in an unladylike manner.
“Georgiana! Are you wearing breeches under that habit?”
George shrugged, entirely unrepentant. “We’re just back from our morning ride.”
The old lady closed her eyes in a ‘heaven-help-me’ expression, muttered something under her breath, took a deep breath and continued, “As I said, the duke is bringing two of his friends, and one of them might be interested in you, Georgiana—though not if you sit like that! Or wear breeches. No gentleman of taste—”
“And one of them might be interested in Lily.” Rose smiled warmly at her sister.
Aunt Agatha glanced at Lily. “Perhaps,” she said dismissively. She raised her lorgnette and raked it critically over the person of her youngest niece.
Lily, knowing what was coming, sucked in her stomach and held her breath. But it did no good.
“I see you have failed to follow my advice about the diet that was so effective for Lord Byron, Lily. You’re as fat as ever.”
“Lily isn’t fat,” Rose flashed angrily. “She’s lovely and rounded and cuddly. But not fat!”
“And besides, she did try that dreadful diet,” George said. “For two whole weeks and it made her quite sick for no result. Potatoes drenched in vinegar? Ghastly.”
“A small sacrifice for the sake of beauty,” Aunt Agatha said with all the complacence of a woman who had never had to diet in her life.
“Lily is beautiful as she is.” Rose squeezed her sister’s hand comfortingly. “We all think so.”
Aunt Agatha snorted.
“Better to be sweet-natured and cuddly than a nasty, well-dressed skeleton.” George gave a meaningful glance at Aunt Agatha.
Lily tried not to squirm. She hated this, hated people quarreling over her, hated it when Aunt Agatha examined her through her horrid lorgnette—as she did every time she visited. Under that cold, merciless gaze, Lily always felt like a worm—a fat, unattractive, stupid worm. And she couldn’t bear another evening of it.
“I’m sorry but I can’t come to the opera tonight,” she found herself saying. “I have a—a previous engagement.”
There was a short, shocked silence. Rose and George blinked and tried to conceal their surprise.
Aunt Agatha’s gaze, her eyes horribly enlarged through the lens of her weapon of choice, bored into Lily. “What did you say, gel?”
Lily swallowed but held her ground. “I said, I have a prior engagement.” She pressed her lips together. She was hopeless at arguing;, she always gave in eventually, so it was better to say nothing.
Aunt Agatha gripped her carved ebony stick in a bony grasp and stamped it on the floor. The floor being covered by a thick Turkish rug, the effect was rather lost. “Did you not understand me, you stupid gel? A duke and two of his friends have agreed to join our party at the opera. A duke! And two other eligible gentlemen. And you say you can’t come? What nonsense! Of course you will come!”
Lily eased her fingers out of her sister’s grasp. Now her hands were sweaty, as well as her thighs. She wiped them surreptitiously on her skirt and said with as much dignity as she could muster, “I was under the impression you had issued an invitation, Aunt Agatha, not an order.” 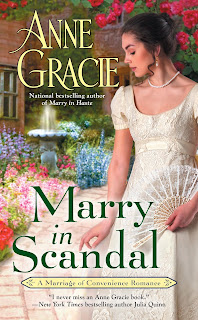 Shy young heiress, Lady Lily Rutherford, is in no hurry to marry. She dreams of true love and a real courtship. But when disaster strikes, she finds herself facing a scandal-forced marriage to her rescuer, Edward Galbraith, a well known rake. Despite his reputation Lily is drawn to the handsome Galbraith. In the gamble of her life, she agrees to marry him, hoping to turn a convenient marriage into a love match. As heir to a title, Galbraith knows he must wed, so a convenient marriage suits him perfectly. But there is a darkness in his past, and secrets he refuses to share with his tender-hearted young bride. All Lily's efforts to get close to him fall on stony ground, and in desperation she retreats to his childhood home--the place he's avoided for nearly a decade.Must Lily reconcile herself to a marriage without love? Or will Galbraith realize that this warm-hearted, loving girl is the key to healing the wounds of his past--and his heart?

Only lucky person who enters the giveaway will receive a $100 Visa Gift Card
and one copy of each of the books below.
Click to enter: http://bit.ly/2zlFxAq

For next week’s fun, head to one of the following blogs on December 11:

Are you reading Anne Gracie's Marriage of Convenience series?

Do you enjoy a heroine with curves?

Are you as excited about Lily's story as I am?