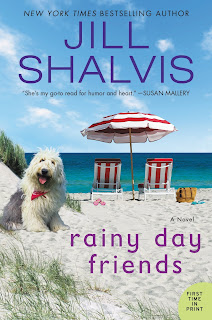 Lanie Jacobs lives with anxiety as a steady companion. Given her history, it is hardly surprising. Brought up by emotionally distant parents who were unable to love her, she thought she had found her HEA with her husband Kyle. But a couple of years into her marriage, she knew things were not right. Still, her intuitive recognition of a problem did not prepare her to become a widow or for the humiliating discovery that she was only the first of Kyle’s several wives. Eager for change, she leaves her life in Santa Barbara and accepts a temporary position as graphic artist for the Capriotti Winery in Wildstone, California. The large, lively, loving Capriotti family who grants everyone who works for them the status of family member is a new experience for Lainey. From Cora Capriotti, the company CEO and beneficent maternal force, to six-year-old twins Samantha and Sierra, the Capriottis threaten Lainey’s carefully constructed wall to isolate herself and protect her heart from further damage. The greatest danger comes from the father of the twins, Mark Capriotti.

When his wife abandoned their twin daughters, Mark Capriotti, gave up his military career, resigned his commission in the Air Force, and returned to Wildstone to take on the job of deputy sheriff and to be a single dad to the loquacious Samantha and the silent Sierra. His girls are everything to him, and he has decided that there is no room in his life for a long-term romantic relationship until they are grown up. His postponement of love does not mean that he is immune to the appeal of a beautiful woman, however, and from their first meeting, he is conscious of the attraction that simmers between him and Lainey.

Lainey does her best to remain indifferent to Mark, but how can a girl resist a sexy man in uniform who makes her laugh, melts her heart with his tenderness toward his daughters, and proves with his every action that he is one of the good guys? Lainey tries, but when Mark makes clear that all he can offer is passion with a time limit, Lainey embraces the offer and the man. Of course, protecting their hearts is a more difficult task than they thought. Lainey soon has Mark rethinking his timeline, but Lainey’s wariness lingers.

Lainey has also denied herself the bond of friendship since all her supposed friends became scarce when her husband’s polygamy was revealed, but she senses a kindred spirit in another newcomer to the winery, River Green, a pregnant young woman down on her luck who is rescued and given a job by Cora Capriotti. But River is holding close secrets that could devastate Lainey anew and erode all the progress she has made in opening her heart to Mark, to his young daughters, and to all the Capriottis and the world into which they have welcomed her.

This hybrid of women’s fiction and romance is Jill Shalvis at her best. She offers the intersecting journeys of two women, sensuous love scenes, rich, contemporary humor, and a large cast of vivid, interesting characters in whom readers will delight. Underlying a captivating story is the reminder that in some measure all the characters—and by extension, all the readers—are among the walking wounded.

It is typical of Shalvis that the poignancy is balanced by humor, sometimes subtle and sometimes laugh-out-loud funny. I loved the scenes between Lainey and the twins. I could relate to the expensive perfume that falls victim to the curiosity of little ones. I also loved the anxiety quotes that prefaced the chapters, making me smile but also reminding me of Lainey’s vulnerability. This one was my favorite: “The human body is 90 percent water, so basically we’re all just cucumbers with anxiety.” But most of all I loved this world and those who inhabited it. Lainey is a sympathetic, deserving heroine who is stronger than she realizes, Mark is the best kind of hero—strong and sexy but also genuine, honorable, funny, and nurturing. River’s youth, vulnerability, and stubborn independence win the readers’ hearts. And all the Capriottis are endearing. I especially loved the twins, who are both adorable and real, and the large-hearted Cora.

This is the second book in the Wildstone series, but setting is the primary connection between the two books. Rainy Day Friends can easily be read as a standalone. I know Shalvis’s next books are Heartbreaker Bay tales, but I hope she returns to Wildstone. I love these characters, and I want to know more of what the future holds for them, especially for River and for Mark’s sister Mia. If you like women’s fiction with a heaping serving (the kind the Capriottis provide at their daily lunches) of romance and a pleasing balance of heat and heart, I think you will fall in love with this story too. I highly recommend it.

One randomly chosen person leaving a comment will receive a print copy of Rainy Day Friends. U.S./Canada only