Traveling the World with PJ - Sweden Part One

Travel is one of the great joys of my life. Exploring new countries, learning their history and culture, meeting their citizens...shopping their stores...and, of course, capturing it all with my ever-present camera. It would be hard to overstate just how much happiness it brings me. This year, my destination was Sweden, a country I'd never visited and didn't know much about but I was eager to learn. I was especially eager to visit Sweden as it's now the home of my niece and her family. I was there for three weeks last month and each moment was filled with the most wonderful experiences. Here are a few highlights from my first week.


Opened in 1923, City Hall is without doubt the most iconic symbol of the city of Stockholm. It's tower can be seen from a vast distance and its nearly eight million bricks are a stunning contrast to the beautiful blue waters of Lake Mälaren.

The inside of the building is just as impressive, including the city council chambers, the opulent Gold Room, and the Blue Room (which isn't actually blue) where the Nobel Prize ceremony and reception is held.


And a couple closeups of the ceiling: 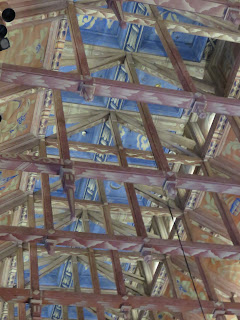 The ceiling panels are painted with actual scenes of local areas to symbolize the openness of the government. The design of the ceiling signifies that decisions made in chambers flow up and out of the building to all residents of Stockholm. 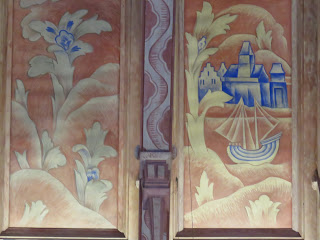 Stockholm is made up of a series of islands, mostly connected by bridges. 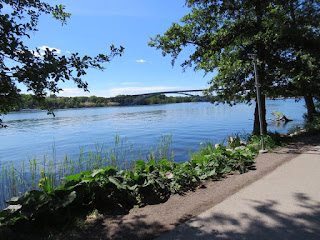 Though they certainly have their fair share of vehicle traffic, they've also designed their city for the ease of pedestrians. Everywhere, you'll find sidewalks, benches, footbridges, bicycle lanes, and beautiful views.


Swedes love to be outdoors! They walk, run, bike, engage in watersports; they're a very active society. They are also a very family-centric society with plenty of parks and other areas for family fun. Also, in Sweden, each parent receives individual maternity leave after the birth of a child so you see lots of dads pushing strollers throughout the city, biking with a child in a seat behind them, doing the grocery shopping, dropping children off at preschool, etc. Both moms and dads seem to be very active and hands-on in the raising of children. Swedes also love their dogs. You see them everywhere: in stores, at cafes, on the buses. They seem to be very well-trained. At least, I never saw one misbehave and I saw a lot of dogs. If you're unable - or unwilling - to walk the city, they have a clean, safe, and efficient public transportation system including buses, trams, and the metro that will easily transport you to your desired destination.


If you have a child in a stroller, you ride the bus free and the bus has an open area designed for strollers with pull-down seats for the pusher. More on the metro stations later because they are an amazingly delightful surprise!

Gamla Stan, which dates back to the 13th century, is Stockholm's old town. Honestly,  I could have spent my entire visit exploring its winding alleyways and historic buildings. Today, it's filled with shops, cafes, and the like but it only takes a few turns to steer you away from commercialism and into a quiet corner where you can easily imagine you've stepped back into the 1600s.

Gamla Stan is also the home of the Nobel Museum as well as the Royal Palace, the primary home of Sweden's royal family. I didn't see any of the royals though I did see their motorcade one day (a ton of security to drive them two blocks for an official event) and we caught the military band that accompanies the daily changing of the guard a few times.

Stockholm is a very clean and colorful city. Flowers are everywhere and it's evident art is much appreciated. 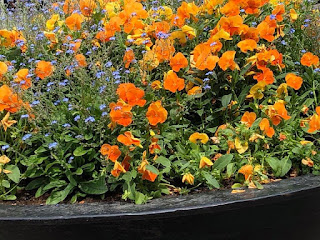 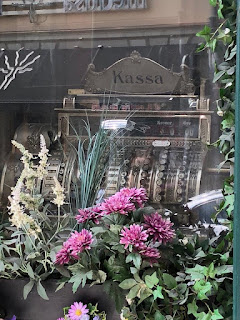 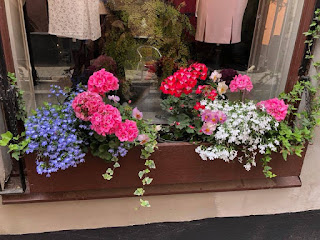 The island of Djurgården (which means the royal game park) in Stockholm is home to a variety of museums, including the Abba Museum, the Nordic Museum, The Vasa Museum, Skansen (an open-air museum) and an amusement park. It's also home to beautiful parks, tree-lined walking trails, and Michelin star restaurants. I could have spent all day strolling through the park below. That's one of the towers of the Nordic Museum in the background. 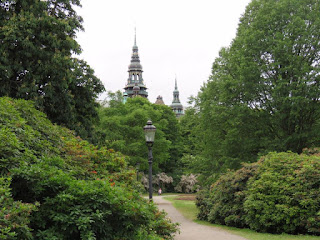 And here's the same museum from another view. 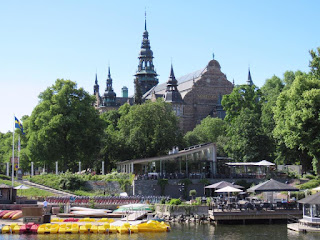 One of the highlights of my first week in Sweden was a trip to the Vasa Museum. The Vasa was a Swedish warship built in the 1600s. At the time, it was the largest warship in the world and it's a masterpiece. Unfortunately, it was a doomed masterpiece due to its architecture being too top-heavy. The ship foundered and sank in the Baltic Sea, less than a mile from shore, on its maiden voyage August 10, 1628.

Many of the ship's bronze cannons were salvaged in the 17th century but after that the ship seemed to be forgotten until it was re-discovered in the 1950s. Incredibly, after 333 years under water, the mostly intact ship was brought to the surface in 1961 and restored.

It sits in a cradle at the Vasa Museum and, I have to say, standing next to it was one of the most incredible experiences of my life. If you ever travel to Stockholm, this is an experience you do not want to miss.


That ship had some big anchors! 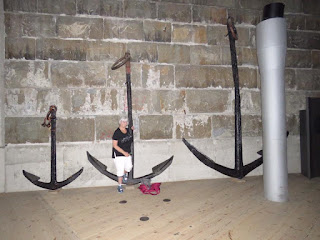 I couldn't wrap up my first week in Sweden without a look at food. Of course, staying with my niece, I already knew I'd be treated to delicious meals. She's a wonderful cook and baker and has had a year in Stockholm to experiment with local cuisine.

Add to that the fact that her husband (who is Japanese) is a whiz in the kitchen when it comes to Asian cuisine and...well, let's just say I wasn't worried about going hungry.

I fell in love with a little cafe on a quiet street in Gamla Stan that has a surprisingly diverse selection of gluten-free pastries. Here's my niece with our breakfast selections: lemon cake and carrot cake. They were delicious! 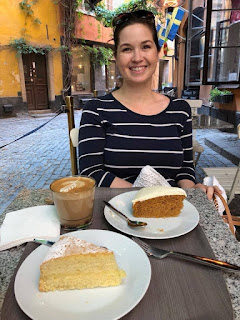 Being gluten intolerant, eating at restaurants in foreign countries can be a concern but I was delighted to discover a variety of dishes available to me at numerous restaurants in Sweden, like the traditional Swedish Meatballs (called köttbullar) and potato puree we had at a lovely Michelin star restaurant on Djurgården. This dish is served with pickled cucumbers and lingonberry sauce (shown in the photo below). And, yes, I ate the whole thing! *grin* 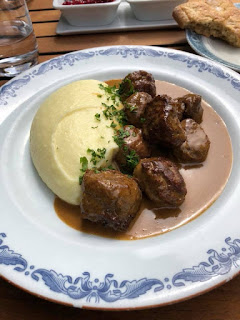 My gluten-free breads plus the pickled cucumbers and lingonberry sauce. So good! 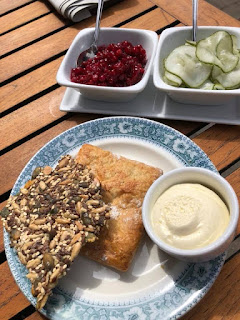 And here's a photo of the outdoor seating entrance at the restaurant. I liked it so much we went twice! 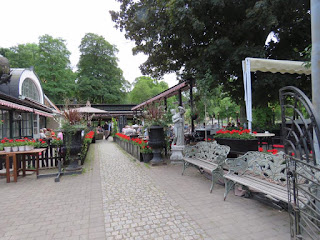 It's a good thing we did so much walking because it would not be an understatement to say that I ate my way through Sweden. Here's the beef carpaccio and caprese salad we shared for lunch one day at an Italian restaurant on Gamla Stan. The population of Stockholm is very diverse and that diversity is mirrored in the many wonderful dining options available throughout the city. 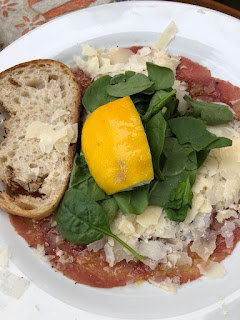 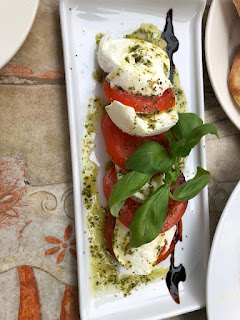 Baby geese were in abundance all over the city. Here's a mama, papa, and babies who were wandering the grounds near the Vasa Museum. 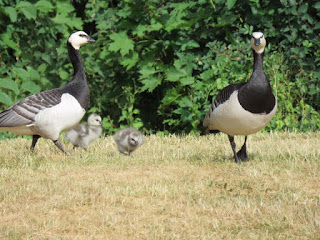 That's it for part one of my Swedish adventure. What's on your travel schedule for this summer?

One randomly chosen person who leaves a comment will receive a book from my conference stash plus a souvenir from Sweden. (U.S. only)