Tour Review, Excerpt & Giveaway - - An Affair With a Spare


An Affair With a Spare
By Shana Galen
The Survivors - Book 3
Publisher: Sourcebooks Casablanca
Release Date: July 3, 2018
Reviewed by PJ

Rafe Beaumont, fifth son of an earl, uses his irresistible charm with the ladies to glean dangerous war secrets. Now he's putting those skills to the ultimate test: capturing an elusive assassin by seducing his daughter. The problem? She's entirely immune to Rafe's flattery.

Never before has Collette Fortier met a man as attractive as Rafe. But her father's life is at stake, and succumbing to Rafe would be disastrous. But when Rafe turns the tables on her, offering support and friendship instead of a fleeting affair, Collette finds herself tempted in ways she never could have imagined... 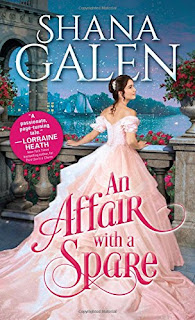 Suspense, romance, spies, and hedgehogs. That's right, I said hedgehogs. They all play significant roles in this third book of Shana Galen's popular The Survivors historical romance series that follows the post-war journeys to love of a small group of younger sons who were part of a secret military regiment during the war with France. Rafe, the youngest of eight children of an earl, put his good looks and charm to good use behind enemy lines to ferret out secrets for England. When his former commander asks him to take on a new mission, Rafe is ready to put his skills to work but the woman from whom he must obtain information, inexplicably to Rafe, is the first woman in his entire life who seems immune to both his looks and his charm!

Frenchwoman Collette Fortier has traveled to London under a false name and false pretense. Collette's father, a feared assassin for Napoleon, is being held prisoner by the new regime and she fears for his life. Only if she obtains a set of codes from England's Foreign Office, will her father's captors release him. Collette loves her father and remembers what their peaceful country life was like before he was forced to carry out Napoleon's demands. She will do anything to save him but she can't be distracted by the charming man who seems suddenly interested in her. She can't imagine why he would be anyway. He flusters her. And when Collette gets flustered, embarrassing things happen, such as blurting out everything she knows about the mating habits of hedgehogs. It's hilarious, endearing, and, ultimately, irresistible to Rafe.

As the two dance around one another while each pursuing their own individual mission they begin to move from adversaries into friendship. And when the friendship begins to evolve so do deeper feelings but obstacles abound. Rafe was deeply affected by events in his childhood and believes himself unable to love which hinders him from recognizing what he's feeling. Also, he must succeed in his mission to find Collette's father and bring him to justice and that is the straw that will break whatever hope they have of being together.  Unless they can find another way...

I've really enjoyed this series and An Affair With a Spare is another winner. Galen has created two multi-layered, engaging characters with complex backgrounds and placed them in a situation that seems impossible to resolve. The story flows smoothly with a nice balance of both suspense and romance along with action, humor, and heartfelt emotion. As Rafe's background is unveiled it's easy to see why he's become the man his comrades call "The Seducer." As more of the man beneath that facade emerges, I found myself falling for him just as hard as Collette does. As for Collette, I admired her loyalty to her father and her determination to save him, even in the face of seemingly insurmountable odds. I also found her simply charming and couldn't help but smile each time bits of hedgehog mating trivia burst from her mouth. I so wanted these two to find a way to a happy ending. Galen didn't make it easy on them and, I admit, I had no idea how she was going to resolve the issues between them. How she accomplished it was a surprise I didn't see coming (I always enjoy that) but one that I could thoroughly embrace.

As usual, the secondary characters are vibrantly portrayed and contribute much to the story. We see more of the horribly scarred Jasper, who hides his burns behind a mask, in this book and that's only ramped up my excitement for his story. It will be next in Unmask Me if You Can, due out on November 6.

Are you reading this series?

Do you have a favorite book, character, or couple in the series so far?


In this excerpt from An Affair With a Spare,
former soldier and charmer Rafe Beaumont and
spy Collette Fortier remove their figurative masks.


That was a rather appealing idea as well. Who the devil cared about restraint and all the rest of that rot? She was in his arms and he wanted her and she wanted him…and if he took her, he might just ruin everything. Because he was not who she thought he was.