Excerpt from The Highland Renegade by Amy Jarecki 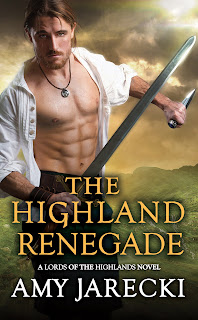 She is the daughter of his sworn enemy.
Famed for his fierceness, Laird Robert Grant is above all a loyal Highland clan chief. But when redcoats capture his rival's daughter, he sets aside their feud and races to her rescue. Aye, Janet Cameron is beautiful, cunning, and so very tempting, but a Cameron lass is the last woman he should ever desire.

He is her one hope of happiness.
Janet refuses to meekly surrender, not even when surrounded by foes. She takes every chance to escape, first from the English soldiers and then from the wickedly handsome Robert. Yet with each day they spend together, his unexpected gallantry chips away at her reserve little by little. As danger and treachery loom, can she trust him enough to choose love over vengeance?

Have you read any of Amy Jarecki's books? Do you have a favorite?