Today's Special - - My Kind of Forever

I'm happy to welcome Tracy Brogan and the Montlake Romance tour for My Kind of Forever to the blog today. Tracy Brogan is one of my favorite contemporary romance authors. Her stories never fail to warm my heart and tickle my funny bone. In fact, I laughed so loud and so often while reading My Kind of Forever that I was surprised the person in the condo next door didn't start pounding on the wall...or knock on my door to find out what was so funny so they could enjoy it too!

I've fallen in love with Brogan's Trillium Bay and the characters who live there. If you're looking for stories that makes you sigh with satisfaction...smile with joy...maybe shed a few tears...and laugh until your sides hurt, then this is the series for you. And, if you want to start at the beginning, don't miss book one in the Trillium Bay series: My Kind of You. It's currently on sale in e-book format at only $1.99. I loved it! 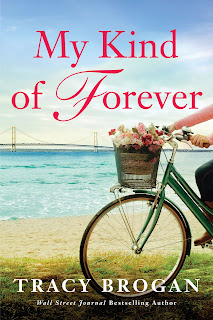 As the youngest mayor Trillium Bay has ever elected, Brooke Callaghan wants to prove she’s up to the challenge. She’s stepping out of her practical teacher flats and into her sister’s treacherously high heels…with disastrous results. But if she’s going to (literally) stumble her first day on the job, why not fall into the arms of a handsome stranger?Leo Walker is a rarity on Wenniway Island. Not only handsome, he’s also single, funny, and—most importantly—interested in Brooke. Unfortunately, his reasons for being on the island are temporary, so in spite of the undeniable chemistry between them, he’s not a forever kind of guy.When a private investigator arrives with news of a jewel thief hiding on the island, Brooke finds herself dealing with one kerfuffle after another, and Leo proves to be a delicious distraction. What does she really know about him, though? And the biggest question of all? Does this short-term romance hold the possibility of long-term love?

Guest Post:
The Risks (and Rewards) of Dating in A Small Town
by Tracy Brogan

MY KIND OF FOREVER is the second book in the Trillium Bay series set on a small island in Northern Michigan, and tells the story of thirty-five year old Brooke Callaghan who has just been elected as the youngest, and first female, mayor the town has ever had. As the oldest of three sisters, Brooke is accustomed to taking charge and bossing others around, but the stodgy, long-time members of the decisively not-modern city council are determined to keep the status quo. In fact, the only one who seems to take Brooke seriously is Leo Walker, the new bartender whose reasons for being on the island are both short-term and known to him alone.


Despite a budding attraction to Leo, Brooke knows she needs to focus on mastering her new job, especially when rumors of a jewel thief hiding out on the island begin to circulate and the well-established rumor mills goes into overdrive. And speaking of rumors, Brooke is more than a little concerned with what the townspeople might say if they discover she and Leo are spending time alone. Coming from such a small community, in this case a village with a winter population of just six hundred people, people’s private lives rarely stay private, and modest, pragmatic Brooke doesn’t like the extra attention. Especially since a bad relationship from her past has left her overly cautious.

Although determined to prove to her neighbors and family she’s got what it takes to be a great mayor, with Leo’s encouragement, Brooke comes to realize she’s also entitled to address a few of the more personal aspects of her life, such as finding romance. But when things with Leo get rocky, she falls back into old patterns, believing that love is too elusive and not for women like her. Fortunately, the local community knows otherwise. They see the real Brooke, the one she thinks is hidden. They know her dedication and intelligence and worth, and they know she deserves to have it all. They know she deserves to have a forever kind of love. And so does Leo.

Excerpt: My Kind of Forever


“I didn’t mean to eavesdrop,” Leo said after everyone else had left and I remained seated in the small meeting room holding my aching head in my hands. “But it sounds like you have your work cut out for you.”


Wow. Did I ever. I’d just spent the past two hours listening to so-called adults bickering about a litany of arbitrary topics. Should Polly’s Popcorn Shop be allowed to sell day-old products? Could the street sweepers add five minutes to their afternoon break? Who was going to play Santa during the Christmas Parade if Harry didn’t come back in time? And the biggest topic of the day? Did everyone see the awnings Tasty Pastries had put up, and who on earth had approved that?
“It’s like they couldn’t even hear me talking,” I said, looking up at him for a response, just to reassure myself that I was, in fact, speaking out loud.
He picked up an empty glass with one hand while wiping a ring of condensation off the table with a damp rag. “I’m not sure they could hear each other talking. Seemed like a lot of monologuing without any listening.”
“But I had an agenda.” I shook my paper at him, now covered in notes that I’d scribbled in the margins about all the other things I wanted to discuss. Things I would have discussed if I could have gotten a word in edgewise. The only one who didn’t interrupt me was my own father, but that’s because he didn’t say anything the entire time. Not unusual for him, but I had hoped to demonstrate a little more power over that cluster of clucking hens. “They were worse than teenagers. I have so many great ideas, but all they care about is the awnings.”
Leo wiped another spot off the table. “What ideas?” He gazed down at me, and I noted how dark blue his eyes were. Depths-of-the-ocean kind of blue. The kind of eyes that made every glance feel significant, even if it meant nothing at all. A flutter of something long-forgotten tickled inside my veins. Attraction. Followed by an immediate need to ignore it.
“Oh, all kinds of ideas.” I smiled tiredly and pushed myself up, because it was nearly five thirty and the Palomino Pub would start filling up with the evening crew pretty soon. “I’ll get out of the way now so you can have the room for dinner guests.”
“Speaking of dinner,” he said, “I’m new around here, so I was wondering, what restaurants do you like?”
“Oh, we have lots of great places to eat. All price ranges. The Windemere Grill is right down on the corner. There’s the Imperial Hotel dining room if you want something elegant. The Feast Well Bistro, Carmen’s Café, and Tate’s Tavern on the Bluff are good, too. At the tavern, you can watch the sun set behind Petoskey Bridge. It’s a great view. And for breakfast, I recommend Link & Patty’s Breakfast Buffet. The pink piggy décor is a little much, but the pancakes are the best.”
“Are you suggesting we have dinner and breakfast?” His dark eyebrow arched just as the corner of his mouth quirked in a ridiculously endearing fashion.
I pushed in my chair with an abrupt scrape. “Excuse me?”
“I was inviting you to dinner. You were inviting me to breakfast.”
That flutter of attraction multiplied even as my mouth fell open for a second. I’m sure it was a great look on me. “I wasn’t. And you weren’t. Were you?”
He laughed, and even though it might have been at my expense, the sound of it sent a flush over my skin and a tingle to places that hadn’t tingled for a very long time.
“I was inviting you to dinner, but not very well, apparently. I’ve been on the island a few days, but I don’t know anyone here, so would you like to have dinner with me?”
I was starving. And he was handsome. And new in town. And looked to be roughly my age. There was no history, no baggage, no reason to say no. But it had been so long since anyone had asked me out, it nearly felt improper. Everyone knew me around here. Everyone would know that we’d had dinner, and certainly everyone would have an opinion about it. And it’s not as if we could go someplace private because there was no place private on the entire island. And there was that issue of the flutter. I didn’t want to be fluttering. Fluttering led to heartbreak. 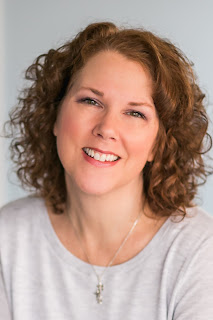 Amazon and Wall Street Journal bestselling author Tracy Brogan is a three-time Romance Writers of America RITA finalist for her Bell Harbor series. She writes fun, funny stories about ordinary people finding extraordinary love, and she lives in Michigan with her two brilliant daughters and their two intellectually challenged dogs. She loves to hear from readers, so check out her website at www.tracybrogan.com. You can also follow her on Facebook at www.facebook.com/tracybroganwriter.