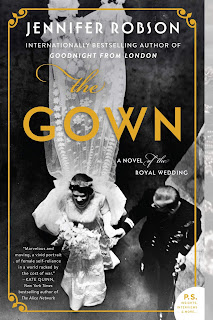 As you may know, PJ offers her reviewers their pick of books she is sent, and I’m so glad she allowed me my pick of this one. THE GOWN is set in post-WWII London, focused around the seamstresses who helped create Queen Elizabeth’s wedding gown. I am a mad Royals fan--and I don’t mean the baseball team. I. WAS. LIT. In anticipation.

Dear Reader, it was even better than I hoped for. I want to double the stars available. When I say I found the book to be Top Dish, I mean, I would gladly come to your house with my copy and just start reading it to you, all the while ruining everything by stopping and going, “OMG, you’re going to LOVE this bit” before hopelessly taking the discovery out of it for you. You’re welcome.

When I thought about what I would write about the story, to explain why I thought this book was so special, I could only think: it made me cry. Generally speaking though, I don’t typically recommend books that make me cry. I generally recommend those books be tossed in the trash immediately. So I pondered it a bit--and it wasn’t so much as I was sad (though I was), but that I truly felt these people were real. I was so invested in the story that I honestly kept forgetting these characters were fiction. And I think there is no better compliment you can make to an author than that: I forgot I was reading a story, but was hearing a story from friends I loved and cared about. That some of the tears I was crying were for the fact the story was ending and I would know no more about these lovely people.

The story is told in three POVs, in two time periods: Ann (an embroiderer for Norman Hartnell, dressmaker for the Queen); Miriam (a French Jewish emigree who also works for Hartnell); and Heather (Ann’s granddaughter.) After Ann dies, Heather receives some of her grandmother’s things, which starts her on the path of solving the mystery of her Nan’s former life in England, her grandfather, and why Nan never spoke of her past. What she discovers is that her plain, ordinary grandmother who never so much as sewed buttons on clothing was an embroiderer who once worked for Hartnell’s and had even helped create the gown for Queen Elizabeth’s wedding. Heather is confused and hurt by the lack of information Nan shared about herself with her loved ones and struggles to understand why. The person who can help Healther most is the woman Ann was friends with before she left England: Miriam Dassin, a world renown artist who created a series of tapestries about her Jewish heritage and the Holocaust. With help from her grandson, Daniel, Miriam helps Heather piece together a history Ann kept secret.

The story unfolds in what feels like an organic and natural manner, embroidered (ha!) with historical detail of life after WWII in London with the rationing, the devastated economy, and the struggle to rebuild a country that was still having a hard time just surviving. The wedding of Queen Elizabeth (then a princess) was a brief shining moment in a period of great sacrifice, and it contrasts greatly the life of the ordinary people who make up the backbone of a country with the royals, whom are frequently questioned as “having any sort of worth considering what we pay for them.” Still, despite the grousing and the real hardship, people still do love a royal fairytale wedding--and when looking at the royal family, the real fairytale wedding has always been young Elizabeth with her dashing young naval officer, Philip. Now mind you, this is the story about the gown itself--not Queen Elizabeth or even the wedding, which gets only a handful of pages max. But as any hardcore Royals fan will tell you: it’s the dress we all love, am I right? So reading about the construction of such a gorgeous piece of history was amazing.

One of my favorite things about this story is that it brings back a character from one of Robson’s previous books, GOODNIGHT FROM LONDON, which featured an affable, lovable bloke named Kaz, who was editor for a magazine called Picture Weekly. The happy ending he was denied in that story is more than made up for in this one. While you don’t need to have read that story to appreciate this one, I would still recommend it...if only for the enjoyment of suddenly seeing an old friend come back and delight as you watch him fall in love.

I would go on, but I don’t want to give away every detail. Though I could. Just call me and I’ll be over in a jot with my copy to read to you. I can only say the story touched my heart and like great art, I will remember it long after this book sits on my keeper shelf. I don’t know what Jennifer Robson will write next, but I can’t wait. I know it will feel so vivid, I will think I’m there.