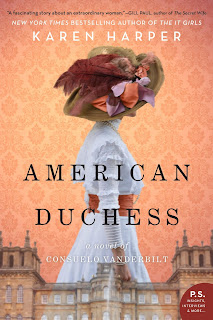 Exquisitely written, meticulously researched, and brimming with larger than life characters, AMERICAN DUCHESS tells the story of Consuelo Vanderbilt, one of the “Dollar Brides” that married into the British aristocracy. Consuelo--beautiful, rich, and kind--is forced to marry the Duke of Marlborough, even though she loves another. As a product of her time and upbringing, she follows through with what is soon apparent to be a disastrous marriage, providing the “heir and the spare”; however, her struggle for belonging, love, and companionship in her new surroundings is constantly thwarted by her husband, who is both jealous of her popularity with his people and family and resentful he had to lower himself to marry an American at all.

The novel sweeps across the majority of Consuelo’s life, starting at her marriage, all the way to 1943 when she is reunited with her true love, Jacques Balsan. In 368 pages, a lot of things happen--I don’t believe the author wasted any pages because each page was gripped with conflict, suspense, and drama--with an acceptable amount of triumph to keep me from putting the novel aside. (Admittedly the Duke of Marlborough was rather tough to handle.) I don’t want to go into too many details because I think like me you don’t know all the history of Consuelo Vanderbilt either, except that as the daughter of the aggressive and scheming Alva Vanderbilt, she was married to a British duke. (Basically I knew her mother--quite famous in her own right--made her marry someone she didn’t want and that their relationship as mother and daughter was very contentious.)

The story starts at exactly the right place--on the day of her wedding--with this brilliant hook: “Everyone was calling it the wedding of the century. I was calling it the worst day of my life.” I mean, how can you not keep turning pages to find out what is going on with a line like that? It certainly challenges my dreams as a reader of what marrying a young handsome duke would be like. (In fact if you love typical historicals with dashing dukes, this duke may be a bit of a struggle for you. He barely has any redeeming qualities.) But Consuelo is a dream as a heroine: she’s brave, she’s kind, she stays true to herself even when forced to marry. She is easy to root for--and while I knew (because I wikipedia’d it) when she actually died, there were scenarios in the book where I was like, “OMG, is she going to make it?”

Karen Harper ends the book in the right place as well--with the reunion of Consuelo with her beloved husband Jacques (you’ll have to read the road to that happening, my friends--it’s worth it) during World War II. It ends with them together, happy, and with several years before them content. (I don’t think I really gave anything away with that--because as I said, you can google it for that info.) All in all, a wonderful read and a thrilling ride. I hope you enjoy it as much as I did.