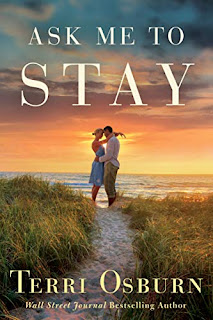 Author Liza Teller’s new book is something of a mystery. She’s been hired to ghostwrite the memoir of Ray Wallis, an elderly stranger eager to share a very personal and surprising life story. The moment Liza arrives on beautiful Haven Island off the South Carolina coast, she has to ask: Out of all the semi-successful writers with stalled careers in the world, why her?
Kendall James, the dedicated ex-military man in Ray’s employ, has the same question. Why is this New Yorker in a frilly blue dress so important to Ray? But as protective and suspicious as he is, Kendall can’t help falling for the tempting outsider. And he isn’t falling alone.
As Ray’s life story unfolds, Liza and Kendall’s chemistry ignites. And all of it could be explosive. On an island this small, Liza soon discovers that there isn’t much room to hide—from the secrets of Ray’s past or from her desire for a man unwilling to give her the one thing she truly wants.

I've been reading Terri Osburn's novels since her 2013 debut, enjoying the humor, heart, complex characters, and deep emotion in each story. All of those characteristics are on display in Osburn's newest book, Ask Me to Stay, though the feel of this standalone women's fiction/contemporary romance blend is different from anything Osburn has previously published. Set on a remote, private island off the coast of South Carolina, the slower pace of this story matches the ambiance of the state's Lowcountry. But don't mistake slow with boring. This story is anything but. It may evoke the soothing feeling of floating down a lazy river on a sultry, summer day but, just as with those lazy rivers, unseen secrets lurking beneath the surface keep this story moving forward and kept me fully invested in Osburn's intriguing characters and their winding journey.

In a story such as this, it's imperative that the characters are interesting, engaging, and capable of pulling readers into their world. Osburn does a masterful job of doing just that. There are no superfluous characters in this book. Each one - whether primary or secondary - is brought to life through their words and actions, creating conflict, eliciting emotion, and pulling me deeper into their story with each revelation. I loved the push and pull between Liza and Kendall and I enjoyed their gradual evolution from adversaries to friends to much more. Their banter sparks and their chemistry sizzles but there's plenty of sigh-worthy tenderness there too. I love how Osburn opens a window into her characters' emotions, fears, and vulnerabilities though their interactions with others, not telling but showing, as we see during Liza's appearance at the island's book club meeting or her interactions with Kendall's dog, Amos. No mere canine wallpaper, the affable Pit bull is integral to Liza's evolution, her relationship with Kendall, and her overall journey. I adored him.

Ray is the linchpin that pulls this story together and could also blow it apart. It's no easy feat to reveal the truth of his life while still making him a sympathetic character that readers will forgive and accept into their hearts. With Ray, Osburn took me through a range of emotions from sweet affection, to curiosity, to disbelief, to anger, to eventual forgiveness. And tears. Such a flawed character she created but she made me care about him despite his flaws and she made me cry. I love when an author can do that.

Ask Me to Stay has my enthusiastic recommendation. I hope it won't be Terri Osburn's only foray into this type of women's fiction/contemporary romance blend. I thoroughly enjoyed it.


Have you read any of Terri Osburn's books? Do you have a favorite?

Who are your favorite authors writing this type of book? Robyn Carr, Susan Mallery, and RaeAnne Thayne are a few of mine.

One person who comments before 11:00 PM, March 7 will receive a Kindle copy of Ask Me to Stay.

I have a second giveaway to add to today's post. The author of Ask Me to Stay has graciously offered a signed, print copy of the book to one randomly chosen person who leaves a comment before 11:00 PM, March 7. (open internationally)