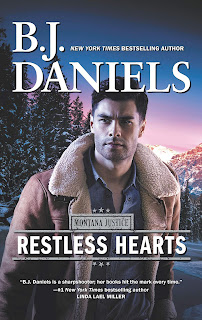 He’s fighting for a second chance with his first love…before it’s too late.The last time PI Blaze McClintock was on her family’s ranch, she left in handcuffs. She vowed then to never go home again…until her estranged father is accused of murder. He’s not a good man—this entire Montana town knows that. But Blaze believes her father is innocent and she’ll do anything to prove it, even ask the one man who broke her heart for help—the only man in town who’s on her side.No matter how hard he tried, Jake Horn could never forget Blaze. As teenagers, their passion ignited, leaving destruction in their wake. Now, years later, it’s obvious little has changed. But as they work together to unravel what really happened that night, a dangerous secret threatens to separate them for good. This time, though, Jake won’t let Blaze go without a fight—even if it means risking his own life.

I love a good mystery. Pair it with a second-chance romance and I'm all in. But set it on a Montana ranch, populate it with intriguing characters, and weave in a plethora of twists and turns that keep me eagerly turning the pages until 4:00 - freakin' - AM in the morning and, obviously, I'm going to give it a 5-star review.

Daniels drew me straight into Montana ranch life, the lives of these characters, and the mysteries that surround them. I quickly became invested in Blaze and Jake, their search for the truth, and their second chance at romance. My heart ached for Blaze, even as I admired her gutsy, take-charge personality. And Jake won my heart as surely as he won Blaze's. I mean, who doesn't love a guy who surprises you by cooking your favorite breakfast? Am I right? The secondary characters are complex and vividly drawn, adding depth and richness to the story, along with plenty of twists and turns.

I'm good at figuring out mysteries, usually by the middle of a book, but not this time. The mysteries in this book are so tightly, and expertly, woven that each time I was certain I had unraveled the threads Daniels would add a twist that sent me off in an entirely new direction. I was still trying to figure things out when the big reveals arrived. I love when an author does that!

Restless Hearts launches Daniels' new Montana Justice series for HQN. Book two, Heartbreaker, is set for release on March 24, 2020. I already have it on pre-order.

Hello, B.J.! Thanks for visiting with me today. I just finished reading Restless Hearts, the book that launches your Montana Justice series. What can readers expect from this new series?

I love the idea of second chances - and not just at love. Some of the characters got into trouble with the law in their youths. Fortunately, Judge WT Landusky gave them a second chance. Now they will do anything for the judge who believe in paying it forward. So when the judge calls, my characters are ready to do whatever he asks.
Both the heroines and heroes are strong so even though they find themselves in danger and are risking their lives, the judge knows they will find their way out and on the way, they’ll find love. J They also solve the mystery, of course!!

I love a woman who enjoys a hearty breakfast, especially when that breakfast is cooked by the man in her life. 😉 Blaze is a pushover for pancakes and bacon. What’s your dream breakfast and which fictional character would you most enjoy cooking it for you?

Shoot, I'd like Jake Horn to cook for me. But any time he asked, I'd make him what we call a Johnson Breakfast. This breakfast includes chicken fried venison, biscuits, and gravy, hash browns and eggs. And of course, homemade peach jam for any leftover biscuits.

Restless Hearts kept me eagerly turning the pages – and trying to figure out the mystery – until almost 3:00 AM. What’s the last book that kept you reading into the wee hours of the night?

Sorry for keeping you up so late, but that is wonderful to hear!
I love page turners and am reading one right now! It is by Jane Corry titled MY HUSBAND'S WIFE. I have no idea how it is going to end, which is a treat for me.

The winter holidays are just around the corner. Please tell us about your favorite holiday tradition?

Every year my husband and I and usually our three Springer Spaniels go up into the Little Rockies and get a Christmas tree. It's been a tradition for us now for more than twenty-five years. Then we come home and decorate it with ornaments that we have collected over those years, listening to Christmas music and recalling other holidays we've shared.

When can we expect the next book in the Montana Justice series? Are you able to share any information about it?

HEARTBREAKER comes out March 24th. This one was particularly fun for me because of all the twists and turns. My characters always surprise me. This one is set between two of my favorites places of Montana, Gardiner near the Yellowstone Park entrance and Flathead Lake in northwestern Montana. Also, I love seeing two characters who are so different find out just how much they are alike - after they are nearly killed and have saved themselves, of course.
.
Thank you for answering my questions, B.J. Is there anything you’d like to add? Would you like to ask my readers a question?

Thank you. Good questions. This has been fun. I would ask readers how they feel about second-chance romance novels and if they've been given a second chance in their lives they'd like to share?

One randomly chosen person who posts a comment before 11:00 PM, November 27, will receive a copy of Restless Hearts.
*Must be 18 or older.
*U.S. addresses only.