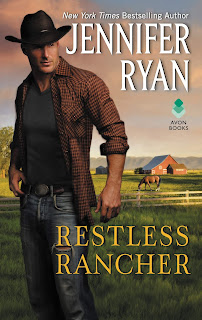 One minute down-on-his-luck rancher Austin Hubbard slept soundly, the next, a sassy spitfire dumped a pitcher of water on his head and woke him up—in more ways than one. Hired to help him rebuild his ranch, Sonya Tucker ends up helping him put the tattered pieces of his life back together. The capable, all-business accountant is on a mission to get the ranch up and running, but can he convince the temptingly beautiful woman to take a chance on him?
Sonya was dismayed that Austin had lost it all: money, family, respectability. Things she—who’d been raised by her mother at Nevada’s notorious brothel Wild Rose Ranch—only dreamed about. But working with the long, lean cowboy shows her that Austin is honorable to his core. Together they slowly grow to see what the love between them might bring.
But then Austin’s powder keg of a family feud explodes, exposing long-buried secrets, and threatening their new-found love…

With each book she writes, Jennifer Ryan further solidifies her place on my list of favorite romantic suspense authors. Restless Rancher is another fast-paced story with snappy dialog, heart-tugging romance, well-placed humor, an intriguing mystery, and enough twists and turns to keep me guessing, and eagerly flipping pages, from beginning to end. I love a good redemption arc and Austin's evolution certainly fits that bill. I enjoyed the connection between him and Sonya, how their relationship slowly progresses, how they work together to restore Austin's ranch and solve the mystery of why his father's so desperate to steal his land. I love their fiery chemistry and the deep emotions that tie them together. I was all-in for their romance and happily ever after. Ryan excels at creating realistic, complex characters and she's on her game once again with Austin and Sonya. Ryan also excels at creating truly nasty villains and she's done so again in this book. She's also thrown in a surprise twist that I didn't expect, but thoroughly enjoyed.Restless Rancher is the second book in Ryan's Wild Rose Ranch series. It stands well on its own but characters from book one play significant roles. While I think readers could enjoy this one without reading book one, that enjoyment deepens with the knowledge that's imparted in the first book.