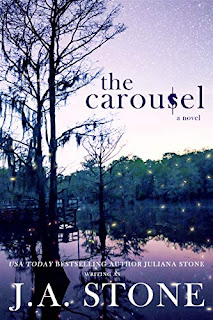 An emotional journey of four women joined by blood, love, loss and time.Pruett Fontaine is at a crossroads. Divorced, she’s lost herself and is struggling to find her place. When her estranged mother dies unexpectedly, she’s drawn back to Louisiana, to a family and town she left behind twenty years ago.With no choice but to deal with her mother’s estate, a father she doesn’t know anymore, and the woman her mother left them for, she brings her teenage daughter to Sweetwater and collides with a past she’s been running from since she was eighteen.Her mother’s journals open her eyes to a woman she barely knew, and she can’t outrun the sins of the past. Secrets are exposed, tragedies are revealed, and temptation rears its head over the course of one long, hot Louisiana summer.

J.A. Stone didn't just tell me a story; she dropped me smack-dab in the middle of Sweetwater, Louisiana, and Prue Fontaine's broken family, both guarding painful secrets of the past, and the fragile hope of forgiveness and redemption in the present. Stone's descriptions of Sweetwater were so vivid that I convinced myself I could smell the sweet aroma of backyard gardens, feel the dense humidity trickle across my skin, and hear the faint strains of a Johnny Cash song intermingled with the sounds of the bayou on a warm, summer night. I could feel the soothing relief of ice-cold beer as it slides down a parched throat, lick the sweet tang of slow-cooked barbecue from sticky fingers, and relive the joys of youth as long-separated friends are reunited and long-ago damaged fences, delicately mended.

Stone's characters are so realistic, so fully formed, that as I accompanied them on their journey, I felt like I was experiencing it with friends rather than reading about fictional characters on a page. Dysfunctional relationships are fully explored and, based on Prue's relationship with her daughter, I'm very confident the author has mothered a teen-age girl at some point in her life. But it's the character of Lila, Prue's deceased mother, who held me most spellbound. Told through her journal entries, as well as personal recollections of other characters, we all - especially Prue - begin to know the full scope of this character and the impact certain events had on who she was as a girl and who she became as a woman. It was fascinating, heartbreaking, and, in the end, healing.

I read this book in one day. Once I began reading, the story refused to let go. The characters drew me in, engaging both my interest and my emotions from beginning to end and the mystery of Lila kept me guessing right up to the reveal. It's the kind of story I'd love to see played out on screen. In fact, the experience of reading this book was so immersive that at times I felt like I was watching a movie. I hope that Stone will venture into this type of storytelling again. She has a clear talent for it.

Because I enjoyed this book so much, I'd like to share the experience with one of you, so tell me...

What was the last book you read that you'd love to see on screen?

Have you read any of Juliana (a/k/a J.A.) Stone's contemporary romances?

One randomly chosen person posting a comment before 11:00 PM, January 29, 2020, will receive a Kindle copy of The Carousel.