Review - - The Secret She Keeps 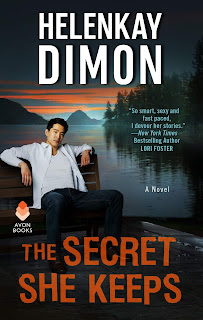 No matter where you run to…
Connor Rye seeks solace on remote Whitaker Island. When his first quiet evening ends with a blow to the head, it’s clear that nothing—and no one—is as it seems. Still haunted by his sister’s murder, he’s buried himself in work while trying to hold his family together. Now, when he has a minute to breathe, he knows better than to get involved with a stranger, but it might be too late to keep his distance.
Desire will find you...
For years she’s pretended to be someone else, but Maddie Rhine is done living in the shadows. Old habits are hard to kick however, and when her past follows her to Whitaker she’s forced to hide once more. Except with Connor. Effortlessly sexy Connor makes it difficult to ignore him. He sees right through her…and senses her fear.
Someone is watching her. And waiting for the right moment to strike. This time Connor vows to be ready.

PJ's Thoughts:
Connor Rye is a protector. Following his sister's death, he stepped in to take care of his family, and the family business, but he's never faced his own grief or (misplaced) guilt over his sister's murder at the hands of her husband. Now, at his family's insistence, he's on a small island in the Pacific Northwest and, instead of the peace they were hoping he'd find, he's smack-dab in the middle of something far more dangerous.
Maddie Rhine is hiding from the dangers of her past and a remote cabin on a remote island seems the perfect place to do it. Maddie has been careful to maintain both anonymity and distance from the island's residents but when Connor arrives, a miscalculation on her part changes her carefully laid plans. Now she finds herself more and more exposed to the other people on Whitaker, and the danger that is far closer than she realizes.
I adored these two. Following their unexpected - and unconventional - introduction, sparks fly. So do bullets, firewood, and various articles of clothing. Their chemistry sizzles, the emotional connection that develops, unexpected to both, and the eventual coming together between a man who's a natural protector and a woman who is determined to save herself, so much fun to watch. There's plenty of danger, suspense, and some heart-wrenching emotion in Maddie and Connor's journey but Dimon tempers it with rapid-fire banter, well-placed humor, and a cadre of quirky island residents who keep everyone on their toes. As for the mystery, I figured out the villain's identity pretty early on but knowing that didn't lessen my involvement in the story as I still had no idea of the person's motivation or how events would eventually play out.

If you're looking for a fast-paced, romantic suspense story with quirky characters, plenty of danger, and an emotional journey that will have you laughing, crying, gasping, and gripping the edge of your seat, give HelenKay Dimon's The Secret She Keeps a try. I also recommend book one of this series: Her Other Secret (read my review here). You don't have to read them in order but it is fun to watch the evolution of other residents on Whitaker Island. I'm already looking forward to the next book in the series and hoping it might star the island's law enforcement officer and a newly arrived mystery woman.


Where would you go if you wanted to get away from it all? Mountains? Beach? A remote island in the Pacific Northwest?

One randomly chosen person who comments before 11:00 PM (Eastern), January 10, 2020, will receive a print copy of The Secret She Keeps.