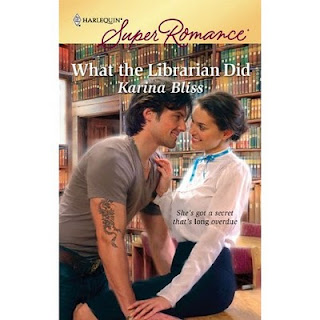 As anyone who looks at the 'what we're reading right now' slide show on this site knows, I get a craze on Harlequins every so often. Usually just one line. I get my fix then I wander back to single titles for a while until the next time. Lately I've been reading some fantastic SuperRomances.

A confession - I used to avoid SuperRomances because of the covers, in spite of the fact that people kept telling me they were great. The stories looked too wholesome for me with all those smiling people and babies. There's lots of babies on Super covers (not on this one, you'll notice - instead we get a tattoo!). But my first year judging the RITA, I got one and loved it so they've become regular reading for me since. A few favorite writers in the line are Kathleen O'Reilly, Sarah Mayberry and Beth Andrews.

Karina Bliss and I were on the contest circuit here about the same time so I knew her name. And she's won an Australian Romantic Book of the Year Award. But it took me until now to pick up one of her books. Now I want all the others.

There's something really intriguing about a librarian story, isn't there? It makes me think of Marian the Librarian in The Music Man. You just know you're going to get an outwardly starchy stick-in-the-mud loosened up by her encounter with passion in the form of a gorgeous guy. That nerd to siren story arc gets me every time (actually the book I'm writing now has a similar theme!). There's something magical in the transformation and also in the fact that the big bad wolf discerns the promise beneath our heroine's buttoned-up exterior. We love it when big bad wolf falls for the wallflower and shows her she's not such a wallflower after all. Yum! Also delicious is watching big bad wolf cope with the fact that he's falling for the last woman he ever imagined would attract him. Fun on so many levels! And in a good librarian story, both hero and heroine emerge at the end with a richer view of life. It's never a one-way street.

WHAT THE LIBRARIAN DID is set in Auckland and features librarian Rachel Robinson who lives very much in a world of books and learning. Rachel has a BIG secret which propels a lot of the plot and adds a heart-wrenching depth to this story. Into Rachel's safe little world bursts ex-rockstar Devin Freedman. After his band breaks up, he seeks a purpose in life. He's s doing a business degree at the university where Rachel works.

There are some hugely enjoyable scenes as the worlds of these two very different people smash into each other. Rachel is one of the few people in the world who has no idea who Devin is. Devin, understandably, is a fairly cocky guy so it's wonderful watching his bewilderment when this dowdy librarian (or dowdy in rockstar terms!) treats him like just one more borrower! Both Devin and Rachel are vulnerable and there's such poignancy in watching them edge towards love, making so many mistakes along the way.

There are a stack of classic romance themes weaving together in this book. Cinderella, certainly. The rake reformed. Secret baby. Fish out of water. Opposites attract. Karina juggles these various elements with immense skill. There's great humor and there's great pathos. I found myself tearing up at a few points in the story and laughing out loud in others.

The characterization is so rich, not just Rachel, with her businesslike distance from life and her yearning heart, and Devin, with his baggage and wariness and sexy swagger. One of the things I appreciate about Supers is that because they're longer than many category books, you can play with things like subplots and secondary characters. There's Mark, Devin's unlikely friend at the uni. There's Trixie, Rachel's goth offsider in the library. There's Devin's mother who is a lovely character. There's even a wonderful clash of cultures when people from the music business invade the quiet island where Devin is living.

I hope you pick up this book. As you can gather, it's a real treat. Definitely worthy of Dewey classification on your keeper shelves!
Posted by Anna Campbell at 12:02 AM