Most of the year I have plenty of time to lose myself in a long, multi-layered story so it's no surprise that my reading choices trend toward full-length novels. But when the winter holidays approach and my calendar begins to fill, leaving reading time at a premium, I turn to those delightfully delicious nuggets of holiday happiness known as the romance novella. Here are a few of the stories keeping me company this holiday season. 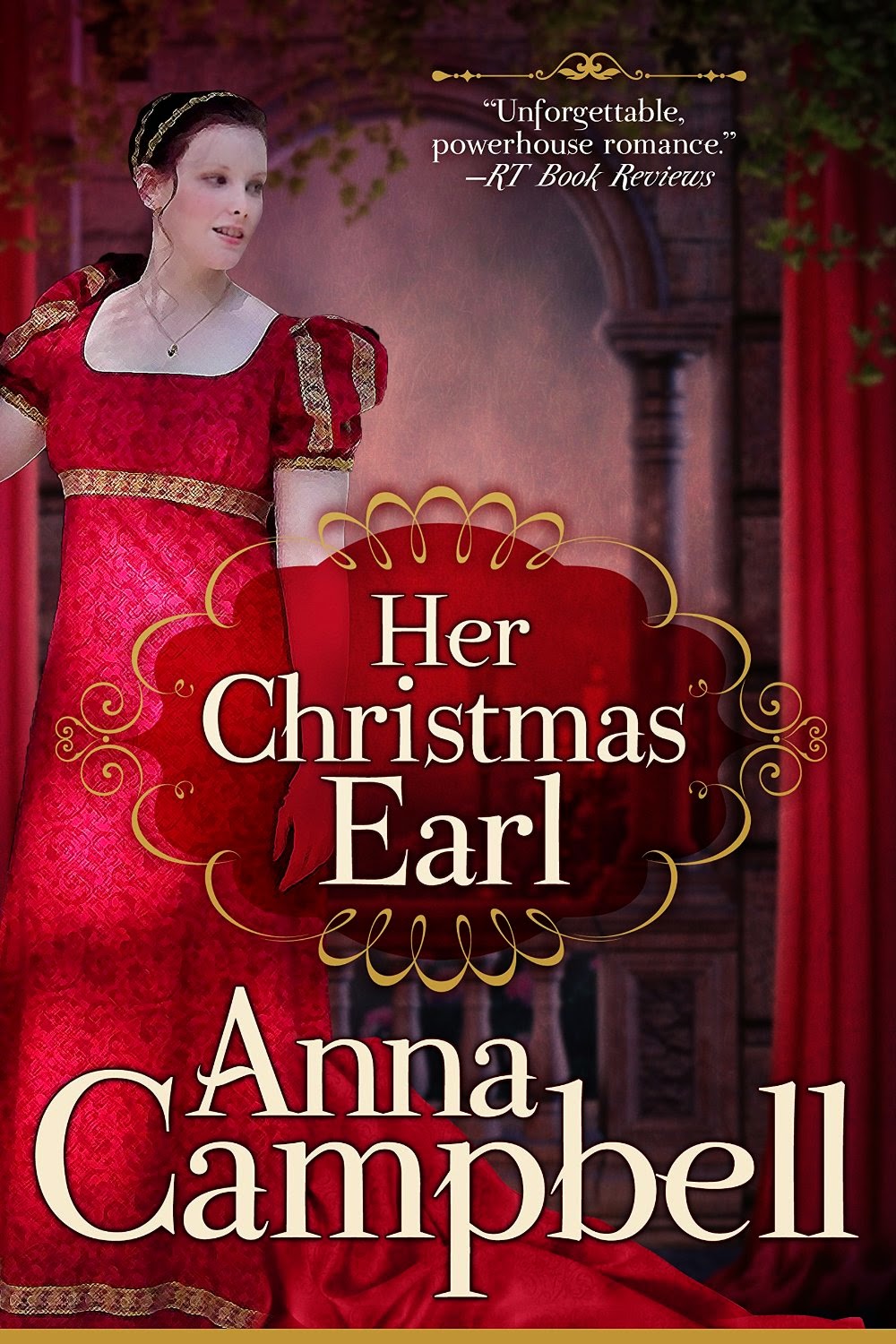 Her Christmas Earl: A Regency Novella
by Anna Campbell

No good deed goes unpunished… To save her hen-witted sister from scandal, Philippa Sanders ventures into a rake’s bedroom – and into his power. Now her reputation hangs by a thread and only a hurried marriage can rescue her. Is the Earl of Erskine the heartless libertine the world believes? Or will Philippa discover unexpected honor in a man notorious for his wild ways? Blair Hume, the dissolute Earl of Erskine, has had his eye on the intriguing Miss Sanders since he arrived at this deadly dull house party. Now a reckless act delivers this beguiling woman into his hands as a delightful Christmas gift. Is fate offering him a fleeting Yuletide diversion? Or will this Christmas Eve encounter spark a passion that lasts a lifetime?

Take one notorious rake who is more than he seems, add a practical young woman bent on saving her family from scandal, stir in intelligent conversation, a little steam, some deeper feelings. Place it all in the gentleman's dressing room, jam the door shut and sprinkle with Campbell's superb wit, humor and depth of emotion to create a lovely, feel-good story that will leave you sighing with happiness.


The Sweet Surrender of Janet Buchanan 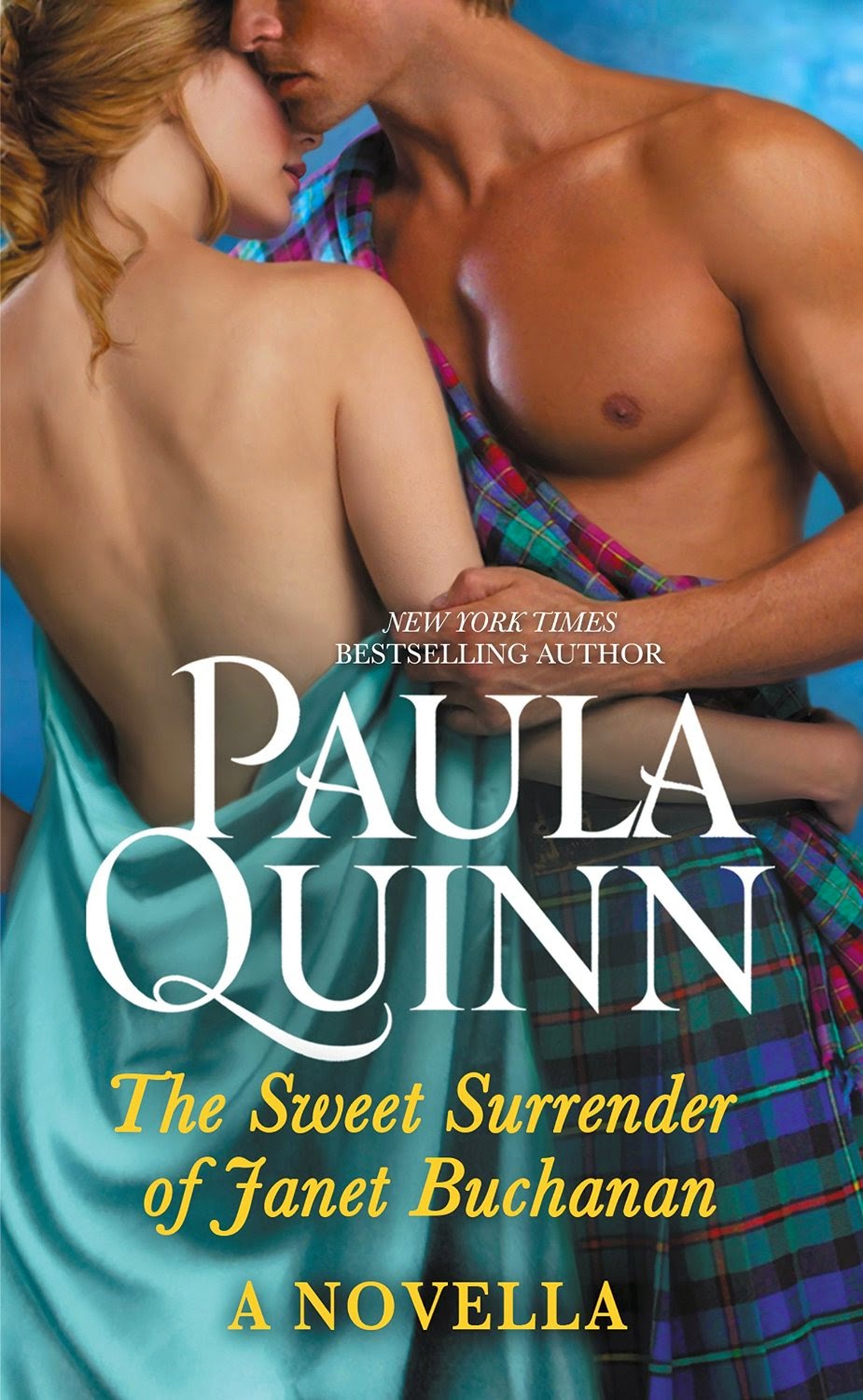 
SHE WOULD NOT BE CONQUERED . . .Janet Buchanan is no man's property. She refuses to marry her family's sworn enemy-consequences be damned. She'd rather take a dagger to the brute herself. Yet when a tantalizing-and infuriating-man from her past comes to her rescue, Janet finds herself undeniably tempted by his hot, hungry kiss.HE COULD NOT BE TAMED . . .Notorious for his prowess as a lover and a fighter, Darach Grant has only one goal in mind: to defend his kin's land from the impending siege of a hostile clan. The last thing he needs is the delicious distraction of Janet Buchanan-the only woman who can stir his ire as deeply as she warms his blood. But Janet's intended will stop at nothing to claim her, forcing Darach to choose between surrendering his honor . . . or his heart.


I'm a huge fan of Paula Quinn's Highlanders - the bold, brawny men and the courageous lasses who claim their hearts. After seeing the fire between Darach and Janet in The Seduction of Miss Amelia Bell (you don't have to read this first but it will give you a deeper appreciation of Janet and Darach's relationship), I was among the many begging for their happy ending. While only 25,000 words, Ms. Quinn has given me all I desired in this fast-paced, emotional, action-packed story of honor, betrayal, loyalty and love. 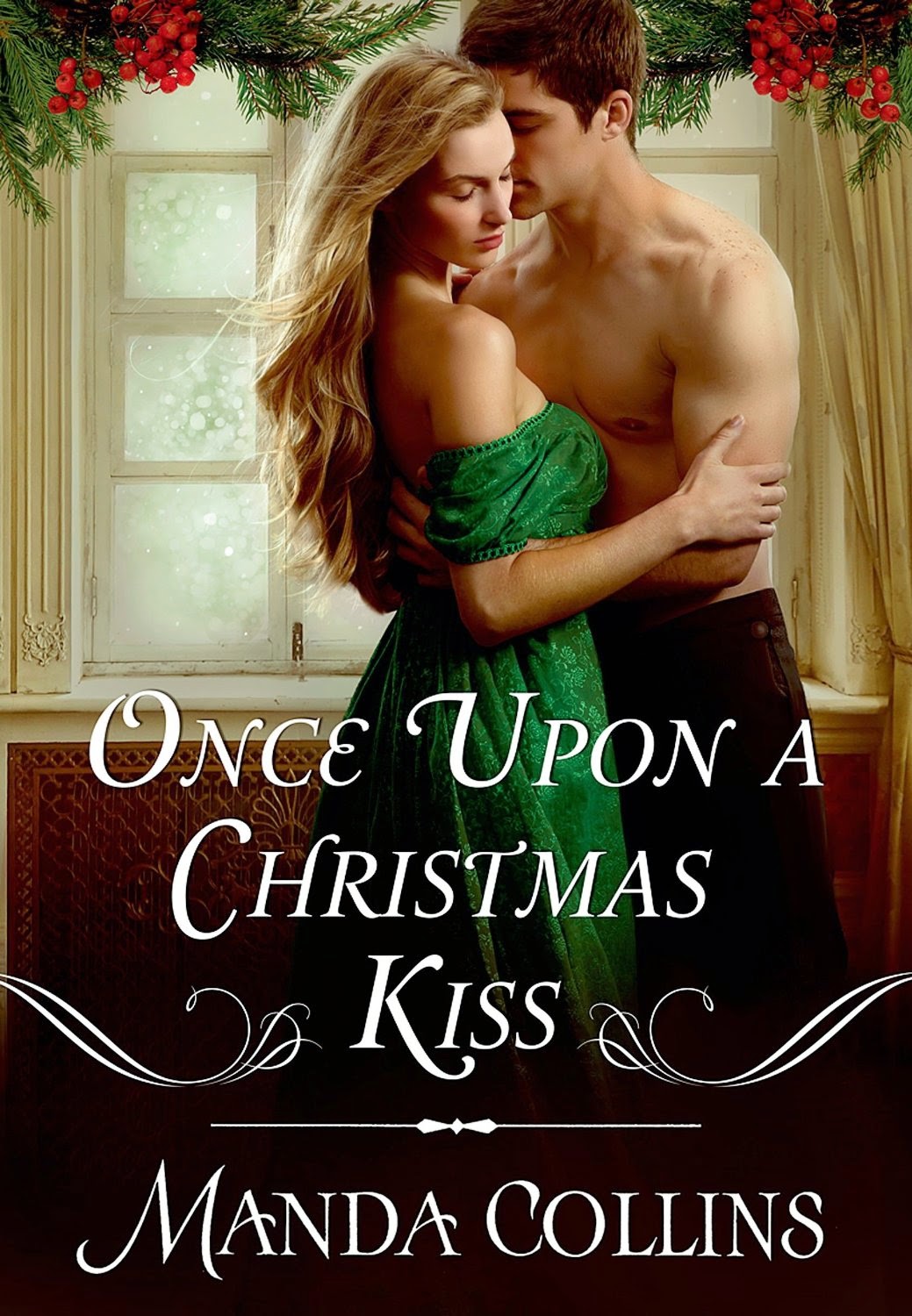 Once Upon a Christmas Kiss
By Manda Collins


IS IT A REASON FOR CHEER?

When Sir Lucien Blakemore arrives at his cousin’s estate for a week long Christmas party, he’s shocked to see Miss Winifred Nightingale among the other guests. Employed by his neighbor back in Yorkshire, the governess with the lovely eyes has always seemed off limits, but she’s visiting here as a guest—and there’s nothing like a little mistletoe to make the spirits bright…

OR THE SEASON FOR HEARTBREAK?

Miss Winifred Nightingale never dreamed a holiday visit with her sister would lead to both ladies spending Christmas as the local lord’s guests. But the big surprise comes when she finds the handsome Sir Lucien Blakemore staying there too. The attraction between them is undeniable, but will an old nemesis and a party guest bent on mischief make their first kiss under the mistletoe their last?

One of the things I most enjoy about Manda Collins' writing is the intelligence she brings to her characters, especially the females. With well-conceived story lines, fully developed characters, witty banter, just the right amount of sizzle and a tightly plotted mystery running throughout, she keeps this reader engaged from beginning to end. With a good-guy hero, a heroine everyone can cheer for and a richly developed cast of secondary characters, not to mention a Christmas house party (who doesn't love those?), Once Upon a Christmas Kiss will "kiss" your holidays with pure reading pleasure. 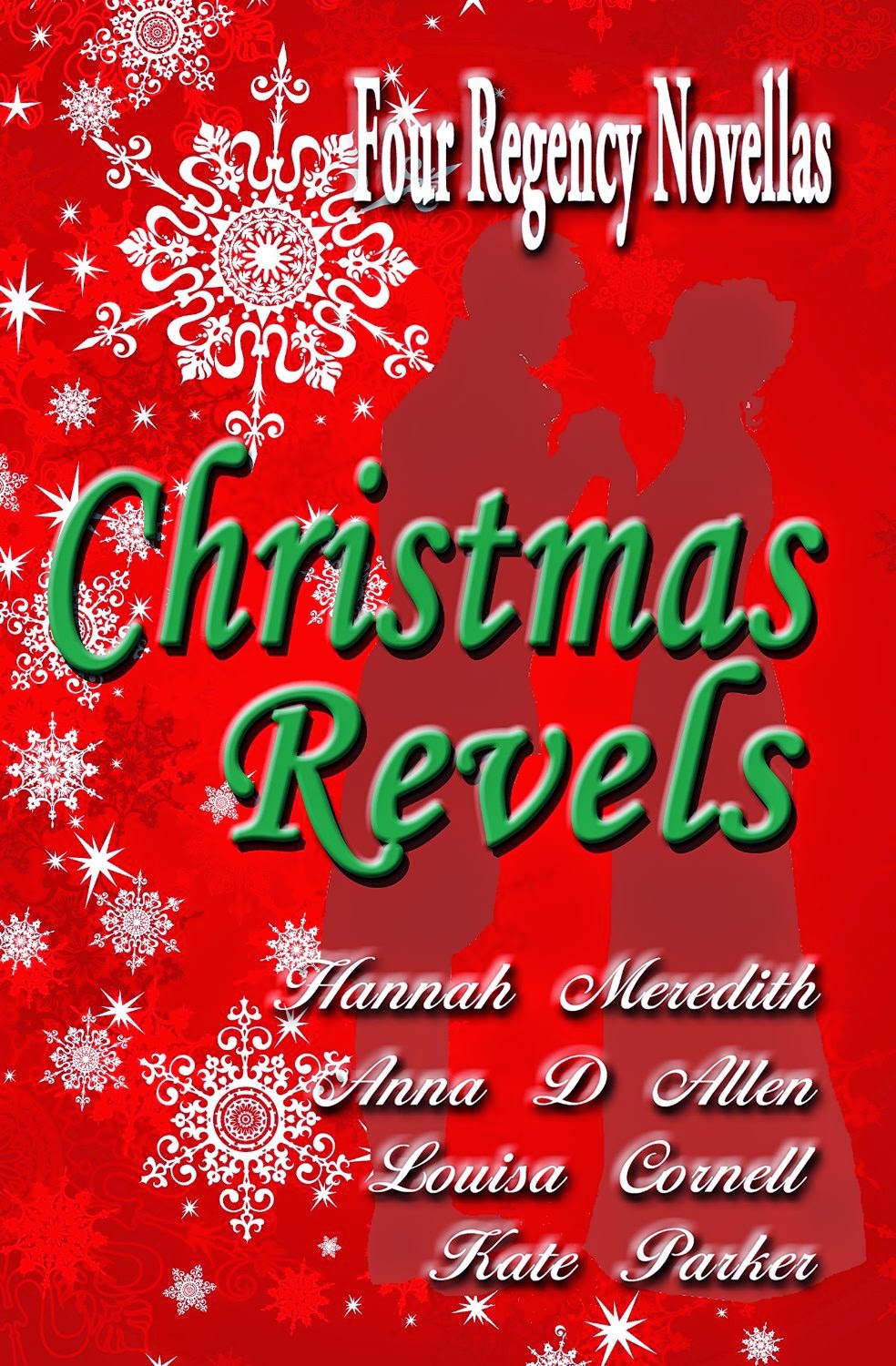 by Louisa Cornell
from the Christmas Revels anthology


Three not-so-wise gentlemen, a pregnant stranger, several tumbling footmen, and an unexpected snowstorm will turn Elizabeth's Perfectly Ordinary Christmas into a disaster ... or a Christmas miracle with the man she loves.


Louisa Cornell is a long-time friend and a natural-born storyteller. I've been waiting many years to see one of her stories in print. "A Perfectly Dreadful Christmas" is a perfectly delightful debut! It has everything I could ask for in a delicious nugget of reading pleasure. The dialogue is witty and fast-paced with humor that is laugh-out-loud delightful but this story also includes deep and poignant emotion that touched my heart and let loose a few tears. The characters are richly drawn with a depth that is not readily apparent. Cornell unveils those depths in our hero and heroine but teases by only pulling back the curtain a bit with the other primary characters. As a reader, that tells me (I'm not above begging here) that they will be receiving their own stories. For a perfectly wonderful holiday novella, pick up a copy of Louisa Cornell's "A Perfectly Dreadful Christmas" in the Holiday Revels anthology. 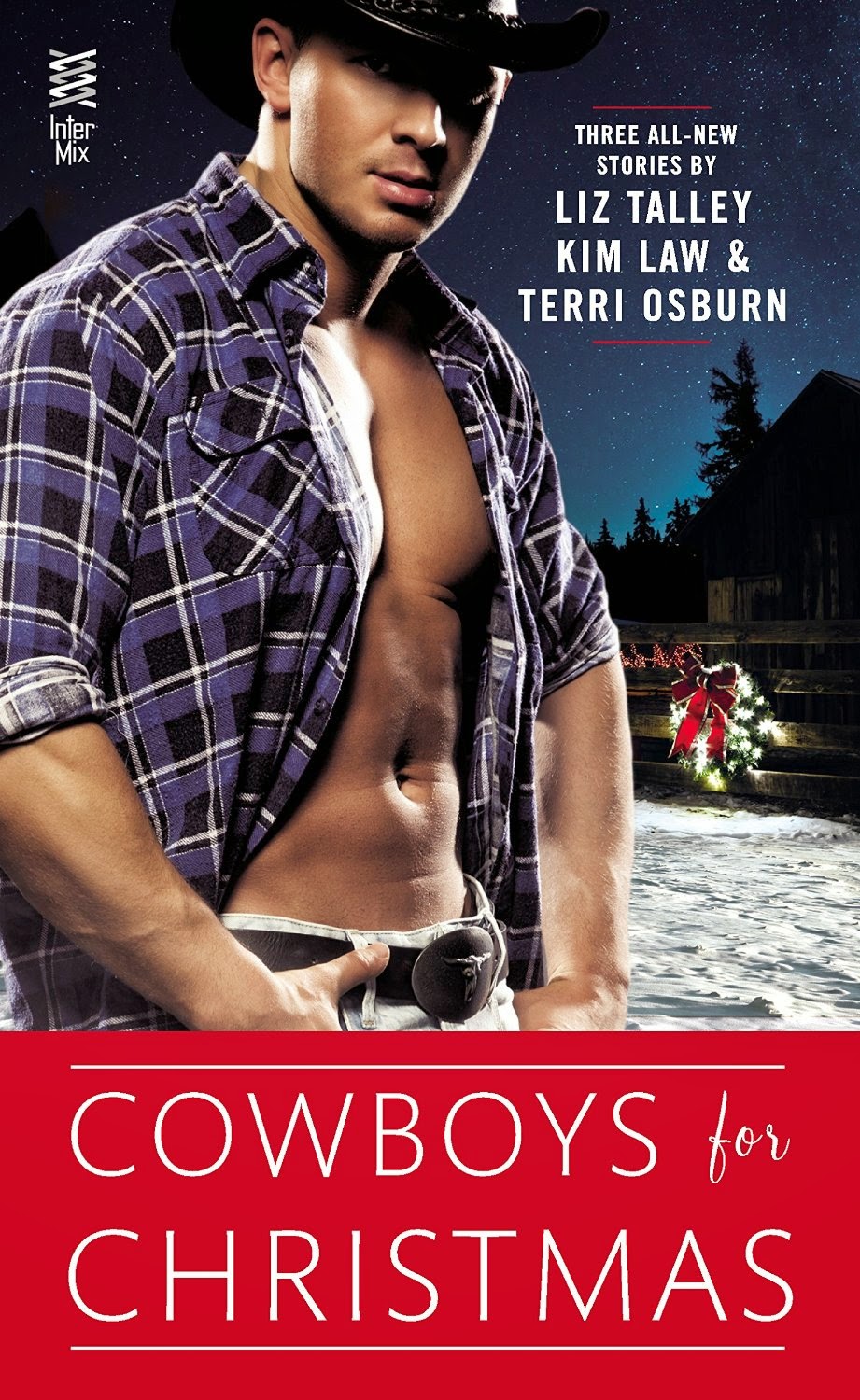 Claire, Georgia, and Mary Catherine couldn’t be more different, but they promised they would be there for one another no matter what. And when they all gather in Holly Hills, Texas, for Mary Catherine’s Christmas wedding, they’ll find they have one thing in common: hearts that are about to be branded—by unforgettable cowboys.
In “Love Me, Cowboy” by Terri Osburn, wallflower Claire would be more excited about the wedding if it didn’t mean running into Mary Catherine’s brother—the bull rider she once had a scorching one-night stand with…
Ivy League volleyball coach Georgia never wanted to see Holly Hills—or another cowboy—again. But a sexy veterinarian is making her rethink her vow to never marry a Texas man in “Kiss Me, Cowboy” by Liz Talley.
Claire and Georgia both think that Mary Catherine is getting hitched to the wrong man, despite how perfect he is. And in “Marry Me, Cowboy” by Kim Law, a local rancher with a wild reputation gives Mary Catherine a glimpse of what might have been—and what could still be...


I do love a sexy cowboy so you know this anthology shot right to the top of my holiday reading list. I enjoyed all three of the stories about three best friends who return home to their small Texas hometown and find love in the most unexpected places but my favorite of the trio is "Love Me, Cowboy" by Terri Osburn. Osburn showcases her skill in getting to the heart of her characters with Claire, a woman who has spent most of her life struggling with her weight, her self-esteem and her bully of a mother and sexy, bull-rider Tyler, her best friend's younger brother and the man who owns her heart - a fact of which he is unaware. While Claire has slimmed down and toned up, she still struggles with her self-image and her controlling mother. It's hard to see herself as the person she is today and even more difficult to imagine that while Tyler loves the "new" her, he loved the "old" her just as well. Osburn guides these two through some harrowing emotional minefields with the finesse for which she has become known in her contemporary Anchor Island series. Give this one a try. 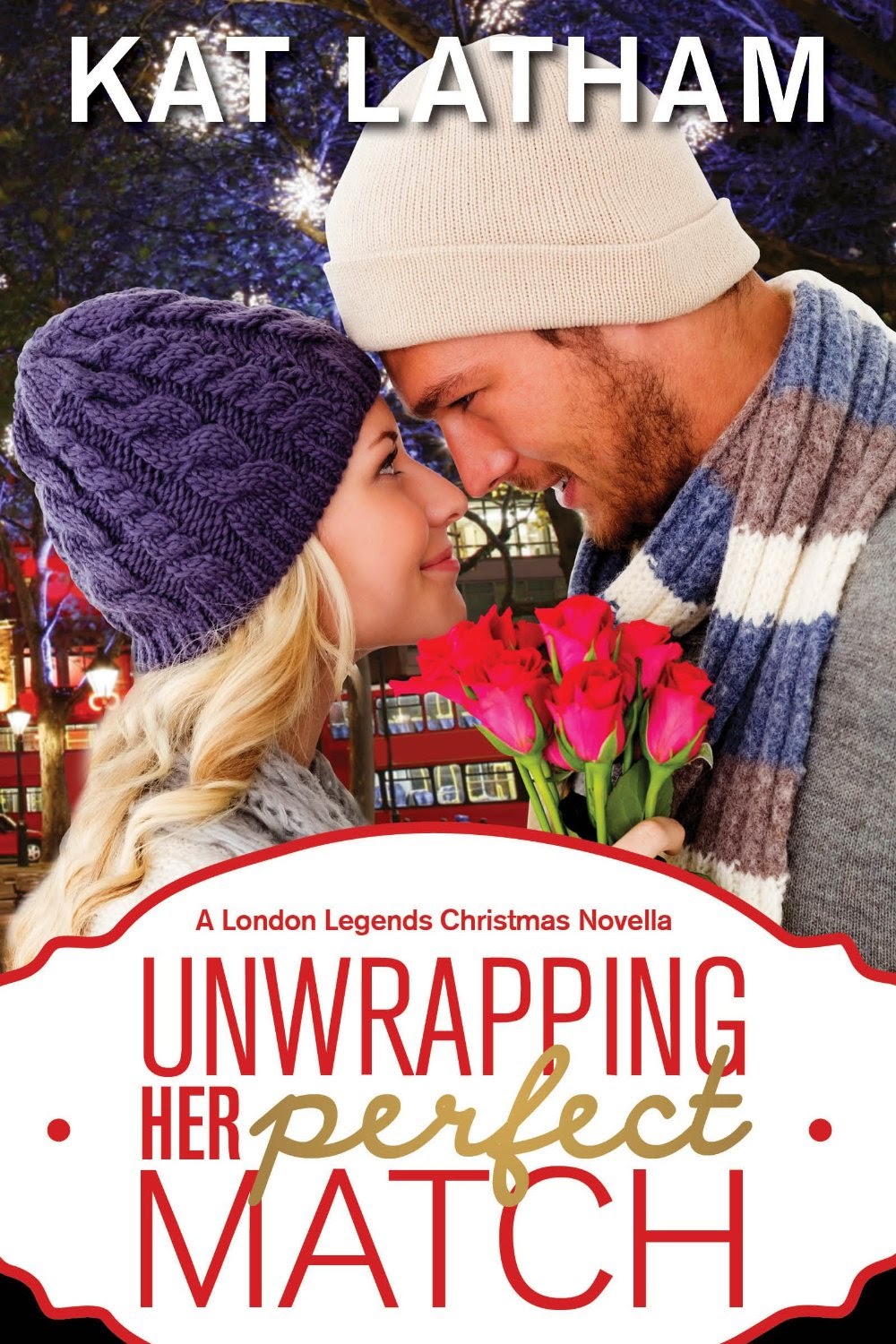 
’Twas a week before Christmas, and at the auction house... At six foot one, Gwen Chambers has felt like a giant her whole life. She’s a calm, capable nurse saving lives in a busy London hospital, but healthy men give her heart palpitations. When larger-than-life rugby player “Little” John Sheldon convinces her to bid on him in his team’s fundraising auction, she discovers how pleasurable heart palpitations can be. A rugby player was stirring, with desire no one could douse... John has wanted Gwen since he first saw her, but when he’s injured in a match just before Christmas he suddenly needs her too. Not only can the sexy nurse help him recover, but she might be able to help him look after his daughter—a shy ten-year-old who speaks only French. But will it be a Happy Christmas for all, and for all a good night? From decorating the Christmas tree to ice skating at the Tower of London, Gwen helps father and daughter open up and bond with each other—and she bonds right along with them. But when John's agent calls with a life-changing offer, Gwen has to decide how far she’s willing to go for her perfect match. Will their first Noël also be their last?

This novella was my introduction to Kat Latham's rugby playing London Legends. What did I do as soon as I finished reading it? I downloaded the rest of the books! I admit it. I love a jock. I've been a sports nut since I was a child and an avid romance reader since my teens so combine the two and you've got me. I'm hooked. But these books are not only for sports loving romance readers. Latham's heroes are fully fleshed, complex men who face more than just the conflict on the playing fields. And though they may be rough and tumble athletes, off the field they deal with issues that are deep, complex and sometimes frightening. Take John Sheldon, the largest man on the team, who is felled by a concussion just before Christmas and must rely on Gwen, the lovely nurse he's just met to help him through Christmas - the first one he's spent alone with his ten year old daughter. Did I mention that his daughter lives in France and doesn't speak English? Or that John doesn't speak French? Or that Gwen has struggled her entire life with her self-image and being bullied as a child because of being several inches taller than everyone else? Or how one person's betrayal has left her feeling unworthy and wary of attention from men? Yep, lots of complex issues and Latham handles them beautifully. Take a trip to London this holiday season and meet one of her "Legends." Bet you can't read just one!


What are your holiday reading habits?

Do you enjoy reading novellas?

Do you prefer contemporary or historical?

Have you read any recently that you would recommend?

I have a package of books ready to come home to two of you who leave a comment on today's post! (U.S. only)

And for two of our international readers, you can choose a Kindle copy of one of the novellas reviewed above!