Review - - Put Up Your Duke 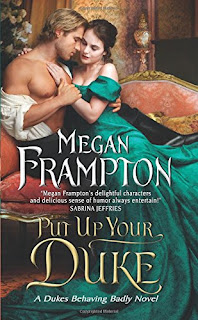 Nicholas Smithfield has a well-deserved reputation for excelling in the bedroom and in the boxing ring. His enjoys his activities and his reputation, and, aside from his affection for his younger brother Griff, he has no ties that require a commitment and no responsibilities. His life changes radically when the discovery of a bigamous marriage in his family history results in Nicholas becoming the current Duke of Gage. To his dismay, Nicholas finds that he has not only inherited the title with all its concomitant responsibilities but also a prospective duchess. Nicholas’s efforts to escape marriage to the oh-so-perfect Lady Isabella Sawford prove futile. Even his brother admits that the agreement forged with the former duke is binding on Nicholas, and the lady’s parents promise financial and social ruin if Nicholas fails to marry their eldest daughter.

Isabella enjoys a brief dream of freedom when she learns of the changing of the dukes, but she is not really surprised when she learns that she is expected to accept the new duke as unquestioningly as she did the old. After all, Isabella has been reared to be the perfect duchess since her parents realized her beauty could be used as social capital. Only with her sister Margaret has Isabella ever dared to be herself. In all other respects, she is the personification of the icy perfection her parents have demanded. Her future as the Duchess of Gage promises more of the same.

Nicholas is not immune to the beauty of his bride, but her obvious fear of the marriage bed acts as a brake on his desire. What follows is a rare romance in which Nicholas slowly seduces the innocent Isabella as they gradually get to know one another. In the process, they each also learn more about themselves even as they grow and change. Nicholas learns what it means to place someone else’s interests ahead of his own, and Isabella discovers what it means to be her own person, one capable of independent thought and action.

Put Up Your Duke is the second novel in Frampton’s Dukes Behaving Badly series. However, the series title is misleading in this case since Nicholas’s rakish behavior ends with his marriage. He lacks the usual dukely arrogance and instead is defined by his willingness to listen to others and an endearing sense of humor. As a husband, he is surprisingly caring and patient.

She felt the sting of tears in her eyes.

“It might end up that we – well, that we find we don’t have that much in common after all. But one thing we should have in common is that both of us should be free to be whoever we truly are.”
Seeing Isabella slowly believe in that freedom and release the self that she has hidden with the gloss of perfect conformity is as rewarding as seeing the protagonists recognize their love for one another.

The secondary characters also add layers of interest. Griff and Margaret, both something of misfits in their world who have found roles that provide them with confidence and satisfaction, are appealing characters, and I for one hope we see more of them. The “villains” here are not evil monsters but rather flawed human beings governed by greed and self-interest.


Overall, this is a not-so-convenient marriage tale that showcases the careful creation of physical and emotional intimacy between two people who marry with little knowledge of one another. The story is seasoned with humor and filled with a mix of introspection and near perfect dialogue. It is an amusing story that also possesses real substance.  If you like historical romance that blends humor and heart, along with sizzle that is artfully used to reveal character rather than merely to titillate, I highly recommend Put Up Your Duke.

~Janga
Posted by pjpuppymom at 6:00 AM