On Second Thought - - In for a Penny

We're premiering a new feature at the Romance Dish today. Sometimes we miss a book - or an author - the first time around. There are so many books published each month and, let's face it, there just aren't enough hours - or dollars - to read them all so some never make it onto our reader radar. Occasionally, a company will reissue a previously published book. Also, with the growing popularity of e-books, many authors have regained the rights to their traditionally published books and are giving them a second chance on the digital platform. All of this gives readers a second chance to discover a wonderful story they may have missed. On the 15th of each month, Janga will be bringing us a review of one of those reissued books and, hopefully, giving you the opportunity to discover a wonderful new book that you may have missed when it was first released or remind you of the reasons you enjoyed reading it the first time around. We hope you'll join us the 15th of each month for On Second Thought!


In for a Penny
By Rose Lerner
Publisher: Samhain
Release Date: June 2, 2015 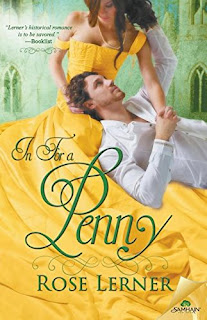 In her 2010 debut novel, In for a Penny, Rose Lerner gives readers a cross-class marriage of convenience tale that combines the lightness of the best traditional Regencies with the gravitas of a novel of social criticism. The result is a fresh take on an old trope and a historical romance novel that deserves a much wider readership than it had when it was originally released. Hurray for Samhain’s reissue!

Nathaniel Ambrey, Viscount Nevinstoke, is an amiable young man who enjoys his life of merrymaking with his friends and his beautiful mistress. He lives strictly for the moment with no thought of tomorrow beyond what amusement the day may bring. That changes when his father is killed in a foolish duel and Nev is forced to deal with the results of a lifetime of excess and thoughtlessness.  Nev becomes the Earl of Bedlow with an estate that has been neglected and exploited and a burden of debt so heavy that even selling his town house, his mother’s jewels, and everything else that is unentailed hardly makes a dent in what he owes. When his sister, Louisa, offers to marry a wealthy merchant, Nev assures her that such a sacrifice is unnecessary, but Louisa’s suggestion reminds him that he met and liked the daughter of a wealthy brewer. She just might be the solution to his problem.

Penelope Brown has no interest in a titled husband. Her memories of the slights and mockery she endured at the hands of her aristocratic schoolmates are still fresh, and she has no illusions about how she and her mother are regarded when they attend social events hosted by the few former schoolmates who remember Penny. When she thinks of marriage, it is an ambitious young man of her own class whom she sees as her husband. Thus, Penny surprises even herself when she accepts Nev’s proposal, even though he makes no secret of the fact that his offer is prompted solely by his desperate need for her dowry.

Neither Nev nor Penny is prepared for all the problems that await them at Loweston, his country seat. The estate and its tenants are even more impoverished that Nev expected, and he has no idea how to deal with the poverty or the simmering resentment. With much of Penny’s money tied up for their children, the funds they have are insufficient for all that needs to be done. An incompetent steward and a vicar who is the very worst sort of pompous, self-righteous fool with no understanding of Christian charity further complicate  matters, as does a neighbor who is willing to go to extremes to control the workers who he is convinced are poised for revolution.

On the personal front, things are not much better. Nev and Penny, despite their differences, genuinely like one another, and that liking develops into warmer feelings. But they are very young (Penny is nineteen; Nev is twenty-three), and they are plagued with insecurities. Penny cannot forget that she is not a true lady, the kind of wife Nev should have, and just in case she should forget for a moment, his mother is there to bemoan the unsuitability and low origins of Nev’s wife. Convinced that the only thing she has to contribute is her money and the knowledge of bookkeeping she has learned from her father’s business, Penny is unwilling to be open about her feelings.

Nev is just as reticent. He feels that he is a failure who has to depend on his wife’s money and cleverness to accomplish anything. He believes Penny deserves a better husband. They are each too determined to protect their vulnerabilities to build on the things they do have in common such as a sense of humor and a love of music or to comprehend that Penny’s understanding of economic principles and Nev’s people skills are actually complementary.  Their marriage and their very lives will be endangered before they share their feelings and claim the happiness they deserve.

Penny and Nev are both wonderful, richly developed characters who struggle and grow during the course of the story. From the beginning, they are individuals who act against type. Romance fiction is filled with aristocrats who court the daughters of wealthy cits or who, at least initially, resent the merchant class heiresses they are forced to marry, often while imagining themselves in love with some more suitable beauty. But Nev never pretends to be anything other than what he is, an inept lord who seeks to marry wealth in order to save his estate and his family. He is grateful to Penny and protective of her dignity, and he quickly comes to appreciate her intelligence, kindness, and strength. He never makes false promises, telling her only that he expects they “could rub along tolerably well together.”

Although Penny admittedly enjoys Nev’s kisses from the first one they share, she never sees him as a romanticized, impossibly handsome figure whom she loved at first sight. She views him as “a perfectly ordinary-looking young man” of “middling height” with hair that is “merely brown” and eyes that are “an ordinary blue, of an ordinary shape and size.” There is something distinctly Austenesque in her response to Nev’s proposal: “ I see no reason why two people of good sense and amiable dispositions should not find a tolerable measure of conjugal felicity, even if they are not, perhaps, united by those bonds of affection and familiarity which one might wish.” Even their lack of communication, which might be irritating in more conventional characters, is believable and forgivable in light of their youth and their particular situation.

The secondary characters are also well developed, and each serves a purpose. I especially liked Penny’s parents, who, far from plotting to see their daughter marry a title, express concern when she accepts Nev. They love their daughter, and their primary concern is her happiness. Her father goes so far as to assure her at the wedding that if Nev makes her unhappy, divorce is an option, regardless of the scandal and expense. Nev’s initial meeting with the Browns is one of the most delightful scenes in the novel, and it is fitting that mutual affection develops between Nev and his in-laws.

When I first read In for a Penny five years ago, I knew it was an extraordinary debut book in its depth of characterization, its attention to historical detail, and its engaging story. Penny and Nev were characters I knew I would revisit, and Rose Lerner was an author I knew I would recommend to friends. Each rereading has strengthened that opinion and my appreciation for this gem of a book. I give it my highest recommendation. And if, after you have read it, you need an audience for your raves, I’m available. I always enjoy having my status as a discerning reader affirmed.


Have you read In for a Penny or any of Rose Lerner's other books?

What books or authors have you discovered through a reissue?

What books do you enjoy revisiting?

One person who leaves a comment on today's post will receive a Nook or Kindle (winner's choice) copy of In for a Penny.