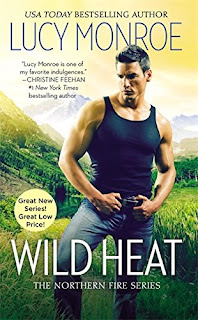 I’m the sort of reader who believes I attract the books I most want to read.  Even as a part-time reviewer--with a website boss who hands me a few books and says “pick one”--even then I attract what I should read amongst the required.

That said, WILD HEAT is my fourth book in a row about a heroine who’s been terribly abused by her ex.

I don’t know why I’m continuously reading such books.  There’s no abuse in my life and to be honest, at this later stage, I would have slammed my head against the wall in frustration had Monroe’s book not been so well-written.

And thank all that’s holy Monroe’s heroine has enough non-victim pluck as to make me cheer her on.   That is, in fact, what I want to read:  I want to read about women who triumph in both love and life by taking control of their own lives.   Life may beat them down, but they themselves get back up.  And love is the cake (or beefcake, as the case may be).

You get all this with WILD HEAT.

Caitlin “Kitty” Grant has returned to her hometown in Alaska in the hopes of healing her heart now that her bones have healed from abuse at the hands of her loathsome ex-husband--an ex-husband who once isolated her from everyone she loved, including her best friend, Tack MacKinnon.   She only hopes Tack will forgive her and let her back into his life.   Trust, however, doesn’t come easy to Caitlin even though Tack has never given her any reason to doubt him.

Tack is still smarting from what felt like Caitlin’s sudden rejection of him when she married someone else years before, and not just because of the loss of friendship.  He’s been in love with Caitlin since he was child.   Only now he must guard his heart.  He won’t let her reject him again.   He just wishes she didn’t roll back into his life beautiful as ever, or as haunted by past hardship.    Suddenly Tack finds himself wanting to take on her problems as his own, heart be damned.

One of the elements I’m in conflict over is that Tack didn’t come barreling in to beat the crap out of the abusive ex-husband, an ex I must admit barely signifies as a character except for maybe one or two phone conversations.  Still, I have enough 15-year-old-boy nature in me to want to see a beat-down, to yearn for that satisfying retribution in the form of a bloody face on the guy who messed up my girl.    By the same token, I’m actually a grown woman who appreciates Caitlin’s responsibility in saving herself from abuse. She does NOT need another man to fix that.   She needs another man for love but she must save herself.

WILD HEAT is a book with a deeper vein; it explores more internal movement than external.   We readers get a profound look into the characters, their motivations and their emotions.   I would say, however, that the climax of the book is a little weak especially since I felt teased into believing it would be more dramatic, but I forgave all that as WILD HEAT isn’t the sort novel lending itself to car chases and kidnappings.   It’s more of a personal epiphany-realizing and inner-peace finding story…. all with really hot sex.  Because, good gracious, the sex was hot!

Monroe’s writing is so fine, I can let go of the climax and rushed ending.   She’s a good writer and WILD HEAT won’t be my last Monroe novel.  Well done.

Now, does anyone know if Lucy Monroe has written ANYTHING about a sword-wielding, bad-ass heroine?   Please?