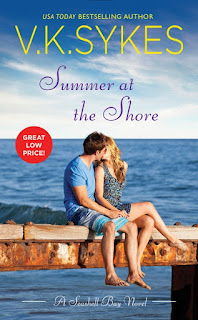 JUST A SUMMER FLING?
Morgan Merrifield sacrificed her teaching career to try to save her family's bed-and-breakfast and care for her younger sister. She can't let herself get distracted by Ryan Butler. After all, the rugged ex-Special Forces soldier is only in Seashell Bay for the summer. But her longtime crush soon flares into real desire-and with one irresistible kiss, she's swept away.

Ryan values his freedom. As much as he wants Morgan, he's not ready to settle down with anyone, much less in sleepy Seashell Bay. But his code of honor doesn't allow him to leave a woman in distress-and she's in desperate need of help to fix the inn. It only takes one day working under the same roof and Ryan is already hoping for a lifetime of hot summer nights . . .

SUMMER AT THE SHORE
EXCERPT

Morgan told herself that her rapidly beating pulse as she watched Ryan disappear below was simply a coincidence. Most übermasculine guys in their early thirties tended to swagger, especially around women. Ryan though . . . he moved with a quiet yet powerful grace that was a wonder to behold. His body was pretty damn wonderful too, with broad shoulders tapering to the classic six- pack and long, muscular legs. His Red Sox T‑shirt hugged his brawny chest and showcased his cut biceps. That amazing body was the product of years of military training and his beloved kayaking, and it was all too easy to imagine how it would feel wrapped around her.
She breathed a tiny sigh and slumped against the back of the bench, turning her face up to the warm June sunshine. She’d spent hours rushing around Portland to pick up supplies. Normally she gave herself enough time before the boat’s departure to use the cargo service for her goods, but too many errands today and a fender bender near the parking garage had delayed her. So it was really great that, after her mad dash, Ryan had appeared to help her. The fact that he liked to rattle her chain spoke to the easy friendship that still existed between them.
Her thoughts about Ryan had often strayed from friendship into fantasy territory over the years, and their encounter at last summer’s festival dance had done nothing to change that. The two of them had ended up in a slow dance at the end of the evening, egged on by their friend Laura Vickers. A little drunk by then, Morgan had found it all too easy to melt into the dangerous shelter of Ryan’s embrace.
It had been a culmination of a stressful evening, brought on by a horrible and very public confrontation between Lily Doyle’s father and his longtime enemy, Sean Flynn. Morgan had been so rattled and worried for Lily that she’d responded by drinking more than she normally did, which had lowered her staunch defenses against her supersecret crush on Ryan. Her heart had pounded like a battering ram as he held her close—too close. His bristled jaw had rubbed gently over her cheek, and she’d thought he was going to kiss her right there on the crowded dance floor. Under the influence of alcohol and nerves—and yes, sheer lust—her smarts had evaporated in the heat of Ryan’s mysterious gaze.
At precisely the same moment, they’d both snapped out of it. By some sort of unspoken but clear mutual agreement, she and Ryan had derailed the makings of a runaway train. Even in her instinctive relief, Morgan had been shaken to realize how good it felt to be held by him. How thrilling the moment had been in its raw sexual power

V.K. Sykes' Seashell Bay is quickly becoming one of my favorite fictional places to visit. In Summer at the Shore, the second book in this heartwarming series, this talented writing team brings us the story of Morgan and Ryan, lifelong friends who have always had feelings for one another simmering below the surface but have never acted upon them. Until now, when circumstances bring both of them home for the summer.

One of the things I most enjoy about Sykes' writing is their ability to create complex, fully-dimensional characters. Ryan and Morgan face the daily dilemmas and decisions that many of us have to deal with. Ryan is at a crossroads in his career and must choose the direction that will be best for him while Morgan's beloved teaching career has been derailed when she's forced to return home to help her special-needs sister try to save the family's struggling B&B following their father's unexpected death.  Adding the growing feelings between them makes the decisions they must make even more difficult, as would be the case in real life. Sykes has given us realistic characters facing everyday challenges, heartaches and joy.

As with the first book in the series, Meet Me at the Beach, this new book is not only about the hero and heroine.  Sykes has created a community of hard-working, sometimes quirky, characters who are seamlessly interwoven throughout Morgan and Ryan's story, exactly as would be the case in any small town. We catch up with main characters from the first book and meet characters who will undoubtedly star in future books without ever losing focus of the main couple in this book. Seashell Bay is a community, with all it's pros and cons, and Sykes captures that beautifully. Each visit to this fictional island off the coast of Maine only makes me more excited for the next one.

I highly recommend Summer at the Shore for your summer reading list.

What are your favorite fictional places to visit this summer? The beach? Mountains? Somewhere exotic?

Have you visited Seashell Bay yet?

I'll be taking lots of books along (on my Kindle) when I go to the beach this summer. Where's your favorite place to read during these hot months? 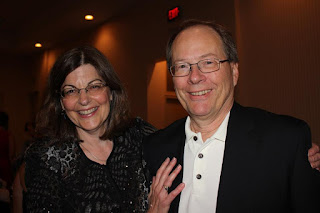 V. K. Sykes is a wife/husband writing team -Vanessa Kelly and Randall Sykes - who write romantic suspense and single-title contemporary romance.  One of the great things they appreciate about being writers is that they can work anywhere so Vanessa and Randy split their time between Ontario, Canada, in the summer and Florida in the winter. Both locations have shores just as beautiful as the imaginary Seashell Bay.

a Rafflecopter giveaway
Posted by pjpuppymom at 7:28 AM