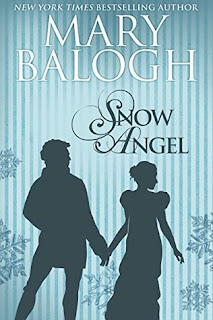 In this novel, one of Balogh’s many “weather books,” Rosamund Hunter, an impulsive widow, quarrels with her brother with whom she is traveling and demands to be let down to make her own way. Caught in a snow storm, she has just realized the danger of her predicament when Justin Halliday, the Earl of Wetherby (Balogh must have chuckled when she chose the name), rescues her and offers her shelter. Justin is on his way to a friend’s hunting box: “The thing was he had planned it all out to be a last fling of freedom—one last grand orgy of uninhibited sex and pleasure. And the weather has cooperated beautifully with those plans.” But instead of being accompanied by his mistress, who has taken to her bed with a cold, his companion is a virtuous widow.

The first third of the book consists of Rosamund and Justin caught in a fantasy world of winter beauty and isolation. They play in the snow like children, engaging in snowball fights, holding a snowman contest, and making snow angels. The attraction between them builds, and they become lovers. There is no seduction here. Justin tells Rosamund that he is on the brink of a betrothal and that he expects to be a faithful husband. Rosamund, who truly loved her much older husband, has no expectations of remarrying. They agree to an affair that will end with no regrets when the roads are passable once again. They part with no intentions of ever meeting again.

Weeks later, Rosamund is one of the guests at the house party being held in celebration of her niece Annabelle’s betrothal, marking the formal recognition of the match that has been arranged for her. Her betrothed is the Earl of Wetherby. Justin and Rosamund are honorable people who try to resist the attraction that draws them to each other, but inevitably they surrender to temptation. Is an HEA possible after their dishonorable behavior?

When I saw Mary Balogh’s announcement on Facebook that Snow Angel had been released in digital format, I immediately went to Amazon and downloaded it. Then, ignoring all the other books I needed to read, reviews I needed to write, and an overflowing laundry basket, I curled up in my favorite chair with a comfy throw and a cup of peppermint tea and began rereading. I didn’t stir until I finished it with the kind of sigh that only rereading a much-loved book can evoke.

Balogh is simply one of the best in the historical romance genre at creating characters who fully engage her readers and placing the characters in believable situations that test them, shape them, and reveal who they are and are not. I have no idea how many times I have read this book, but I’ve read it often enough that my paperback copy, more than a quarter century old now, has a tattered cover, loose pages, and a tea stain or two. I am happy to have a copy on my ereader. I know I will reread it again. It is not one of Balogh’s most popular books, but I think it has that special quality that defines her books and makes them keepers. If you have never read Snow Angel, I highly recommend it. If you have read it, I think you will find it just as rewarding as a reread.