Blog Tour Review/Q&A/Giveaway - - When the Stars Come Out 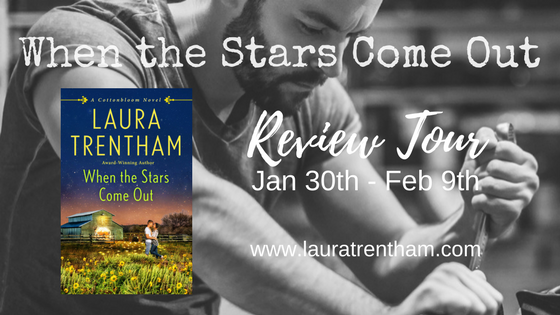 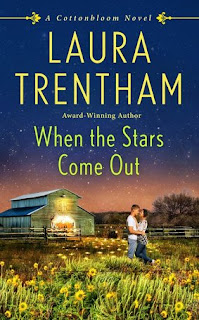 Laura Trentham takes readers back to her small southern town of Cottonbloom for more humor, emotion, and heartwarming romance in When the Stars Come Out. I've been reading this series from the beginning and with each book released, I become more invested in these characters who inhabit the two sides of Cottonbloom: the upscale Mississippi side of the river that bisects the town, and the working-class Louisiana side. In this fifth book of the series, Trentham continues to tug at readers' heartstrings with Jackson and Willa's emotional journey.

People joke that Jackson Abbott's most meaningful relationship has always been with his car and it's probably not far from the truth. He grew up working on cars in his late father's garage and racing them on dirt tracks has always been his escape when life gets rough. He's a good guy - kind and generous - but, except for his brothers and his late father, he's never allowed himself to get close to anyone, certainly not to a woman. A lot of that can be attributed to events early in his life.

Willa Brown is keeping secrets. Hired by their late father, she's worked as a mechanic at the Abbott Brothers Garage for the past couple years and is invaluable to the business. She's also had a crush on Jackson for that entire time but wouldn't dream of acting on it. She's been on the run for five years and has learned the hard way that she can only depend on herself. Jackson always knew how important Willa was to the business but it isn't until he fears she might leave that he realizes how important she is to him. Can he convince Willa to take a chance on him? The two of them are an unbeatable team under the hood of a car but will starting a relationship outside the garage deepen their bond or send a skittish Willa running for the hills?

I loved these two. They're so obviously perfect for one another but both have issues to confront and overcome before they can have their happy ending. Trentham guides them with a deft hand, allowing their journey to unfold slowly and realistically, infusing it with the awkwardness, humor, sweetness, fear, forgiveness, and romance it deserves.

The richness of the Cottonbloom communities and their citizens add to the appeal of this series and this story. The relationship between Sutton Mize and Jackson's twin, Wyatt (Leave the Night On) continues to evolve and we're given more insight into the other two Abbott brothers, Mack and Ford. Mack is the next Abbott brother destined for love in Set the Night on Fire, due for release July 31, 2018. Clayton Preston, a secondary character with a tumultuous past (Light Up the Night) makes a pivotal appearance in When the Stars Come Out, giving me hope that Trentham may have more in store for this ex-con brother of Cottonbloom, Mississippi's Chief of Police.

If you enjoy small-town romance rich with humor, deep emotion, and plenty of heart, I highly recommend Laura Trentham's Cottonbloom books. While all the books stand on their own, for a deeper understanding of the Abbott brothers I would recommend reading Leave the Night On first, followed by When the Stars Come Out. 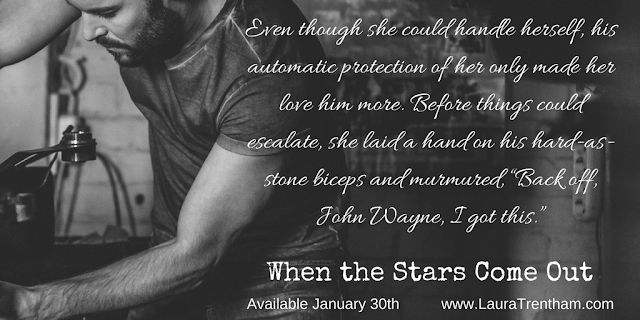 Ha! I’m going to be honest and admit that I don’t have an affinity for cars. As long as it starts reliably and gets me from point A to B, I’m all good. But, I married a man with a love of cars. He’s a mechanical engineer who restores cars as a hobby. We have a 1956 Volkswagen Bug, a 1967 Volkswagen Transporter, a 1973 Datsun Z, and a supercharged 2014 Mustang in our garage/driveway at the moment. That’s not counting my (very reliable) sedan and his pickup truck. We look like Sanford and Sons around here! The idea of writing about three mechanic brothers was inspired by my husband and the hours and hours (and hours) of car shows I’ve been forced to watch with him. I guess it paid off!

PJ: How many more books do you have planned for Cottonbloom?

That’s an excellent question and one I can’t answer yet! Writers with traditional houses work from one contract to the next (usually, but not always, in three-book series.) Set the Night On Fire (out July 31st) wraps up my second 3-book contract. What happens next will honestly depend on sales. It’s the stark reality of publishing as a business. As an aside, this is why downloading pirated copies of books hurts writers so badly! Not only is it a financial hit, but if people are pirating rather than buying then publishers won’t ask for more books from that author. That being said, I do have an idea for another trilogy set in Cottonbloom, so we’ll see! *fingers crossed*

PJ: Willa is a top-notch mechanic. What skill do you have that readers might be surprised to discover?


It’s sad how long I’ve been sitting here thinking about this question! Lol. I’m a chemical engineer by degree and know my way around a chemical plant which I suppose is an unusual path for a romance writer. I’m also a better than average cook. For some reason this always surprises my extended family, I suppose because I subsisted on Hot Pockets and salads until I got married. But my job as a chemical engineer was basically “cooking” in huge 600 gallon reactors. Not a huge stretch.

Readers, what skill do you have that might surprise us?