Review- - The Story of Our Lives 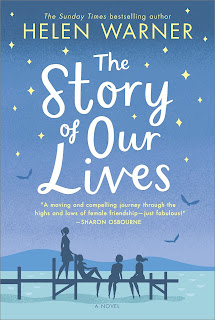 Sophie, Melissa, Amy, and Emily meet their first year as university students in London and establish a friendship that endures across two decades as they grow from girls to mature women, sharing their lives and supporting one another through triumphs and tragedies, through life with good men and with jerks and worse. As is common in women’s fiction—and perhaps to some degree in life--each character is a distinct type. Sophie, the center of the group, meets the love of her life at an early age, enjoys success in her career, and is the most stable of the foursome. Melissa, the child of divorced parents who have second families, is a lost girl and something of a wild child. Amy begins as an effervescent optimist and seems set for a fairy-tale life when she marries a rich, handsome, devoted man, but the darkness beneath the perfect surface almost destroys her. Emily, the most intellectual and the most reserved, becomes pregnant just before she graduates. The identity of her son’s father remains a secret until late in the novel.

The story opens in 1997 when the women, twenty-five at the time, gather for a girls’ weekend. Sophie, living with the boyfriend whom she met the same year she met the other women, is excited about her career in television production but is wondering if steady Steve, who seems boring when compared to her male colleagues, is really right for her. Melissa, who works in the music industry, is drinking too much and hooking up indiscriminately. Amy has met her Prince Charming and announces her engagement. Emily is a devoted mother, rearing her young son Jack alone, with help from her loving parents.

Over the next fifteen years, the friends share each other’s lives through marriages, motherhood, postpartum depression, miscarriage, infidelity, addiction, and domestic abuse. Their annual reunion is sacrosanct, and as they grow more affluent, so do the sites where they gather. Their holidays include time in Ireland, Sophie’s native soil, and Los Angeles, where Melissa’s work takes her. Their love can be tough when necessary; they band together to call Melissa on her self-destructive habits and to save Amy from the marriage that is destroying her. But when another looming tragedy forces Emily to reveal her son’s father at last, the truth may shatter the bonds of their long friendship.

The Story of Our Lives is a well-written novel that falls somewhere between chick lit and women’s fiction, probably closer to the former. Sophie, Melissa, Amy, and Emily are flawed but generally likeable characters. Their romantic lives are a substantial enough part of their story that romance readers will likely enjoy the book. I found Sophie the most appealing of the four friends, and I adored her boyfriend, later husband Steve, a classic beta hero. And the ending will certainly please romance readers. Warner prefaces each chapter with a snippet of headline news from the real world, a strategy that allows the reader to see the lives of the four women within the contexts of a larger world of tragedy, scandal, and hope.

If you like chick lit/ women’s fiction, particularly with an English accent, I think you will find this book a rewarding, entertaining read.