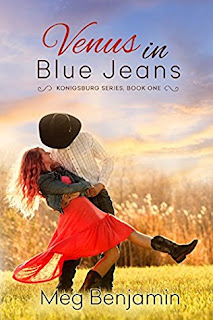 Back in late 2009, I received a book from my friend and fellow Romance Vagabond Lindsay Faber, then an editor with Samhain, with a note saying she hoped I would enjoy the novel because she imagined how much I would like it when she acquired it. That book was Venus in Blue Jeans, the first book in Meg Benjamin’s Konigsburg series. I fell in love with the characters, the setting, and the author’s voice. A desire to read the next book in the series as soon as it was released rather than wait several months for a print edition pushed me to buy my first ereader. The Konigsburg books remain high on my list of all-time favorite contemporary romance series.

This is what I wrote in my Goodreads review after that first reading:

Dialogue so real and funny you'll wish you had overheard it at a local bar; Texas-size H/H in Docia Kent and Cal Toleffson (although he's a transplant from the Midwest), who have jobs they love that don't involve spies, corporations, or law enforcement; a suspense plot that gives a new wag to an old dog without detracting one iota from the romance; sexy love scenes that are hot and tender and sometimes even humorous; and a small town filled with individuals, some of them flawed and foolish--these are just some of the reasons I loved this book.

Venus in Blue Jeans is the first of Meg Benjamin's Konigsburg books. I'm thrilled that she has written/will be writing the other Toleffson brothers stories. Count me among those who will definitely be returning to Konigsburg.

Although I love every book in the series, after several rereads, the first book is still my favorite. Cal, a veterinarian, and Docia, a bookstore owner, are likable and believable and anything but cookie-cutter characters. Their attraction to one another is powerful and immediate, but lust does not consume their every thought. They are adults who are engaged with their work, find time for their friends, and deal competently with life despite their insecurities and family issues. I’ll confess to a shallower reason for loving Cal: Benjamin has Docia describe him as “Kris Kristofferson, circa 1976.” The book also has a vividly drawn cast of secondary characters including Nico, Docia’s cat with an attitude. 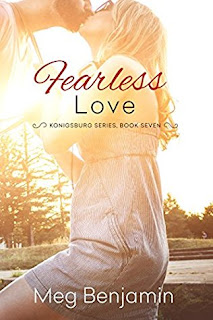 Much of the humor stems from Benjamin’s clever turn of phrase. A cagey dealer in Texas memorabilia has “the ethics of an Enron executive.” Cal mentions his mother and considers “throwing a pinch of salt over his shoulder. But that was to keep the devil, not your mother, off your back.” Docia’s father wears a “suit whose retail price could probably have fed a large contingent of suffering orphans for a couple of weeks with enough left over to buy them all iPods.”

Between 2009 and 2014, Benjamin wrote another seven Konigsberg novels. The three that immediately follow Venus in Blue Jeans feature the other Toleffson brothers. In Wedding Bell Blues, Pete Toleffson, a county attorney in Des Moines, is in Konigsburg to serve as best man when he tangles with (in both senses of that idiom) Docia’s maid-of-honor Janie Dupree. In Be My Baby, “ninja accountant” Lars Toleffson, a recently divorced single father, moves to Konigsburg and hires Jessamyn Carroll, a widow with an infant son, to take care of Daisy, his precocious two-year-old. The combination proves a perfect balance. Long Time Gone, the darkest of the Toleffson stories, pairs oldest brother Erik, Konigsburg’s new police chief, with Morgan Barrett, who is struggling to learn all she needs to know about how to run her father’s winery. The suspense thread in this one is the most effective in the quartet, and Erik and Morgan’s romance develops gradually and convincingly. 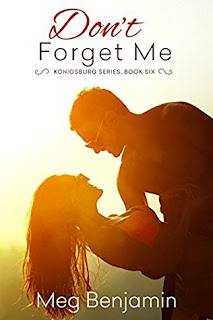 The next four novels in the series feature other members of the community: ex-gambler bar owner Tom Ames and temporary barmaid Deirdre Brandenburg in Brand New Me; restaurant manager Kit Maldonado and assistant police chief Nando Avrogado in Don’t Forget Me; chicken farmer MG Carmody and Joe LeBlanc, head chef at The Rose in Fearless Love; and sous chef Darcy Cunningham, a Nebraska transplant who is bewildered by the Texas obsession with barbecue, and Harris Temple, “the Barbecue King,” in Hungry Heart, which also features a second romance, a match against type between Faro bouncer Chico Burnside (who is much more than most of Konigsburg knows) and scientist Andy Wells. Fearless Love gets my vote for funniest in the series, but Don’t Forget Me, a reunion story, is my favorite in the second quartet.

When Samhain closed its doors at the end of February 2016, this series became unavailable, but Entangled reissued the full series last summer. If you like contemporary romance with characters who feel like friends, a community with flaws and quirks and strengths, and prose that is lucid, smart, and funny, I highly recommend these books. I’m betting that if you begin with Venus in Blue Jeans, you won’t be able to resist the rest of the series. Just writing about them has me primed for another reread.

Posted by pjpuppymom at 1:30 AM