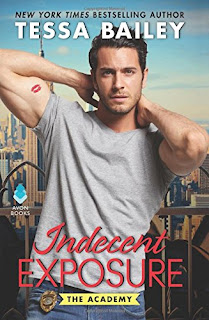 Reading the back of the blurb for Indecent Exposure, a reader might think this was a light, frothy rom-com, like a police version of Top Gun, where the hero has hit on our fair heroine who turns out to be an instructor for the academy he’s currently training. The premise is correct, but the delivery (see: rom-com) is not what I felt was advertised.

Jack Garrett has just met the most beautiful woman in the world--literally, she’s from Ireland--and he’d do anything to spend all his time with her while she is vacationing in New York. Never mind that he has academy to go to during the day; and the fiery little vixen is far too able to keep him at arm’s length, which he’s never had that problem before. He’s got references, if she wants them, of just how popular he is and can be. He can show her a good time. She agrees to meet him for a date the next evening.

The next day, before the best date of his life that he is anticipating, his dream date walks into the academy. She is the guest instructor for target shooting. He can’t believe his luck--he gets to spend his days and nights with her; however, Katie McCoy wants to maintain a bit of professional distance and integrity. Still, she can’t resist Jack, but she is not a girl just interested in a fling. She’s interested in the man beneath. Jack wants to tell her about himself, likes having a girl who is interested in the real Jack--but telling her may send her running. The blurb ends that Jack tells her a little lie of omission.

It sounds like we’re selling vanilla fluffy cupcakes here when what you have is dark chocolate cake with more surprise layers than you can possibly put mousse in. Jack is earthy, sexual, and blunt; he talks dirty often and expertly; and he is intent on making you see God as fast and as often as possible with the skill of his mouth and body. He also has a dark secret that he numbs out by drinking and maintaining a perpetual alcoholic buzz. He’s created his entire life around getting by, which he’s doing at the police academy, because he didn’t know what else to do with his life and his friends were joining the academy.

Let’s just say when I started the book, I was anticipating something in the sweet, dialogue heavy, funny-cute way of a Tessa Dare or a Kristan Higgins, but what I got was something much more wild, darker, and chockful of sexual experiences, some of which *I* haven’t even done.

Too much information. Sorry about that.

Point being, if you’re good with hot, wild, dirty sex (think Elizabeth Hoyt writing contemporary) and darker complicated heroes and characters, you’re going to be pleasantly surprised. I will say, for these things Tessa Bailey certainly delivers and uses them to her advantage to advance the character arc and plot. If you were looking for something cute or sweet, a hero who would never dream of using the “P” word when referring to anything on a woman’s body, I’d say just go ahead and give this a pass.