Hi Everybody! PJ here. I'm excited to share an excerpt from Lights Out Lucy: Roller Derby 101 today. I'm about two-thirds of the way through an advanced copy of this first book in Elicia Hyder's new Music City Rollers series that releases April 24 and it is so much fun. Filled with humor, likeable characters, strong female friendships, a sweet romance, and women challenging themselves to discover what they're made of, Lights Out Lucy kept me smiling from the get-go. I don't know how many books Hyder has planned for this series but I'll be buying them all. I'm totally invested in these characters and can't wait to read all their stories! 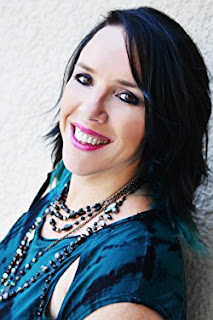 Elicia Hyder played women’s flat track roller derby with the Nashville Rollergirls under the skater name, eL’s Bells. After a black eye, a broken finger, a severely pulled groin, and two serious knee injuries, Elicia hung up her skates to focus on a safer hobby—writing. She has fictionalized her experience in her latest novel, Lights Out Lucy: Roller Derby 101. More novels are to come in the Music City Rollers series. For more information about Elicia and her books, visit her website. For series specific information about the Music City Rollers, including appearances, visit the series website. 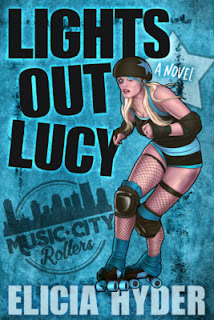 Lucy Cooper isn’t looking for love when she finds it—or slams into it, rather—during rush hour traffic. But her heart, like her car, is a total loss the moment West Adler steps out of his truck to inspect the damage.

West truly is the perfect guy: handsome, funny, rich. The benefactor of not one, but two children’s hospitals. And he’s the main sponsor of the Music City Rollers, Nashville’s championship roller derby team.


When Lucy discovers the Rollers are actively recruiting “Fresh Meat,” she puts her life on the line to catch West Adler’s attention. But will accident-prone Lucy skate off with the heart of Nashville’s Most Eligible Bachelor? Or will she get herself killed in a sport that promises, “It’s not a matter of if you’ll get hurt—but of how bad and when.”

Excerpt from LIGHTS OUT LUCY

Have you ever been to a roller derby bout? Watched one on TV? Is it something you would try?

Accident prone Lucy chooses Lights Out Lucy for her derby name...for obvious reasons. What name would you choose for yourself?

Two randomly chosen people who post a comment no later than 11:00 PM (eastern), April 14 will receive a Kindle copy of Lights Out Lucy.