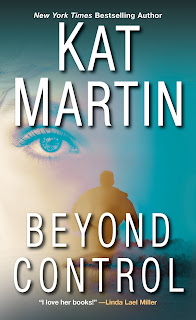 Victoria Bradford and her four-year-old daughter are on the run from Tory's abusive ex-fiancé. Seventy miles north of Dallas, the Iron River Ranch is pretty much nowhere, exactly what Josh Cain wanted when he came back from Afghanistan. Big skies, quiet nights, no trouble.

When Tory shows up with her adorable little girl, Josh realizes he is in for trouble of the most personal kind. But Josh has seen trouble before, and he doesn't scare easy. Not when "accidents" start happening around the ranch. Not when Tory's best friend is abducted. Not even when he realizes their troubles are only the tip of the iceberg.


In Beyond Control, Kat Martin has crafted a compelling tale with edge-of-your-seat suspense, heartfelt romance, emotionally wounded characters, and a life-or-death battle against a charming psychopath with serial killer potential. This story grabbed me from the breath-stealing first scene and kept me glued to the pages until the very end. While their circumstances are different, Tory, her young daughter, and Josh are all survivors, vibrant and real. I felt compassion and affection for all three while Tory's diabolical former fiancé - and abuser - filled me with rage. Kat Martin sure knows how to create a despicable villain. Thankfully, she also knows how to give him the justice he deserves. Josh's innate protectiveness and gentleness toward Tory and her daughter while dealing with their unwanted intrusion into the solitary ranch life he craved after his service as a sniper in Afghanistan endeared him to me and had me hoping the three of them could find a way to be a family...if they lived long enough.

While some crossover characters make appearances in this book (Josh is the younger half-brother of Lincoln Cain, hero of Book One, Beyond Reason), this third book can easily be enjoyed as a standalone. However, there is a secondary plot in the latter portion of the book that will make more sense and not seem as if it comes out of left field if you've already read the earlier books. All three are fast-paced thrillers, with emotionally satisfying romance, that will have you coming back for more of Kat Martin's outstanding storytelling.

A Message from Kat Martin

A Little Time At The Beach

Everyone loves the beach.  Though I live in Montana, I’m fortune to spend my winters at the beach in sunny California.  My writing space looks out on a boat channel that leads to the harbor so I watch the tide go up and down several times a day.

A bicycle-ride away, a sandy beach slopes down to the water where a frothy tide rolls in and out, the perfect place to talk a stroll at the end of a long day or just dig your toes into the warm gritty sand.
For me, there is no better way to spend an afternoon than lying in the sun on a bright-colored beach towel, straw hat shading your face while you read a delicious, page-turning novel.  The rhythmic curl and tug of the waves is the perfect backdrop, lulling me into the story, shutting out the day-to-day troubles of the world, if only for a little while.

As a writer, lying half-asleep in the sun, listening to the soft rush of the wind and the cry of seagulls, is a great way to get story ideas.

Too often I get stuck when writing a novel (I refuse to call it writer’s block, which is way too scary).  The beach, I’ve discovered, is a great antidote.

While I was writing the third book in my Texas Trilogy, BEYOND CONTROL, Josh Cain and Victoria Bradford’s story, I found myself unable to figure out how the heroine was going to escape the perilous situation I had put her in.  After several sleepless nights, I took a drive along the beach just a few blocks from my house.

As I looked at the clear blue ocean stretching endlessly in front of me, my whole body relaxed--a little slice of heaven.  An hour away from the computer, watching the waves crash up on the shore, my creative juices started flowing.  Ideas flashed in my head, some good, some not-so-good, as the next part of Josh and Tory’s story opened up in my mind.

Hurrying home, I madly began pounding on the keyboard, desperate to get my thoughts down on the page.  The story started moving forward again, and I was even able to get a good night’s sleep!

So the next time you’re feeling jammed up about something, whether you’re a writer or not, whether you live at the beach or in the desert, the mountains or the city, find a place that lets you breathe, refreshes you and lets you face the world again.

Have a great summer and happy reading.

Till next time, Kat


Readers, what place allows you to breathe, refreshes you, and lets you face the world again? One randomly chosen person posting a comment before 11:00 PM, June 1 will receive a copy of Against the Storm. (U.S. only) (Winner's choice of Nook, Kindle, or Paperback)