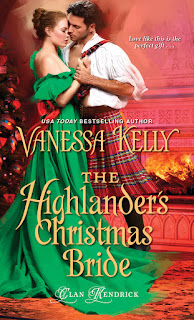 In bestselling author Vanessa Kelly’s irresistible Clan Kendrick series, Christmas in the Highlands means family, celebration—and for one brother, the beginning of a passionate adventure . . .

Being thrown over by the man she expected to marry was humiliating enough. Now that Donella Haddon, grandniece of the Earl of Riddick, has also proven a failure as a nun, she has no choice but to return to her family’s estate. The brawny Highlander sent to escort her is brash, handsome, and the only thing standing between Donella and a gang of would-be kidnappers. But the scandal in her past can’t be so easily outrun . . .

Wealthy widower Logan Kendrick was expecting to meet a plain, pious spinster—not a gorgeous, sharp-tongued lass who can hold her own in any ambush. Though she’s known as the Flower of Clan Graham, Donella is no shrinking violet. In fact, she might be the perfect woman to bring happiness back to his lonely little son’s life, just in time for Christmas.  But first he must protect her from ugly gossip and a mysterious threat—and convince her that their wild, unexpected desire is heaven sent.


Set-up: Donella Haddon has spent the last three years in a convent in a remote corner of Scotland. But the good sisters have decided she’s not suited to life as a nun. Much to her chagrin, Donella has been asked to leave. Logan Kendrick, widower, wealthy businessman, and friend to Donella’s family, agrees to provide her an escort home to Blairgal Castle.

Once on the road, however, masked men try to abduct Donella. Thanks to Logan, the plot fails, but he and Donella are forced to flee. In disguise and with Donella masquerading as Logan’s little brother, they take refuge at a small inn. When the mysterious plotters track them down, they prepare to escape once again.

PS. Some of my readers might recognize Donella from an earlier book, HOW TO MARRY A ROYAL HIGHLANDER (Renegade Royals 4). J

Have you read Vanessa Kelly? Do you have a favorite book or series?

I love a good unsuitable nun story. Do you have any favorites?

One randomly chosen person who comments before 11:00 PM, August 27, will receive a print ARC (advance review copy) of The Highlander's Christmas Bride. (U.S. addresses only)