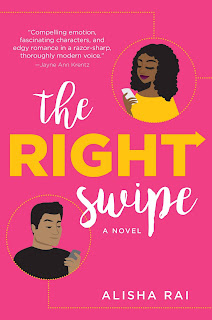 Rhiannon Hunter may have revolutionized romance in the digital world, but in real life she only swipes right on her career—and the occasional hookup. The cynical dating app creator controls her love life with a few key rules:
- Nude pics are by invitation only
- If someone stands you up, block them with extreme prejudice
- Protect your heart
Only there aren't any rules to govern her attraction to her newest match, former pro-football player Samson Lima. The sexy and seemingly sweet hunk woos her one magical night... and disappears.
Rhi thought she'd buried her hurt over Samson ghosting her, until he suddenly surfaces months later, still big, still beautiful—and in league with a business rival. He says he won't fumble their second chance, but she's wary. A temporary physical partnership is one thing, but a merger of hearts? Surely that’s too high a risk…

This wouldn’t normally be a book I’d pick up: being I neither see the appeal of online (let alone “swipe”) dating nor former football players, but I’m all for diverse heroines and funny rom-coms, so I thought I’d give it a shot. Oh, Reader, it was so much more than I thought it would be.

Rhi takes a little getting used to because when we meet her she is so emotionally closed off, she basically lives in a bunker. However, slowly, as bits and pieces of her past are revealed, we understand anyone would be closed off--and yet she thrives. She may be as bristley as a porcupine and scuttlely as a hermit crab, but she is loyal and caring--and her employees are equally so to her. Rhi used to work for Swype, THE online app for dating, but was forced out after a love affair with the CEO turned sour. Success is the sweetest revenge, she tells herself, as she creates Swype’s biggest competitor, Crush, which puts women in the controller’s seat of online dating. Rhi’s current desire is to buy Matchmaker, an old school form of online dating with a 100 point matching system, but to do so she will need to get near the eccentric elusive owner, a woman named Annabelle who just happens to be Samson’s aunt.

So, who is Samson? OH. MY. He is absolute sex on a stick and dipped in chocolate. Again, former pro-football players aren’t my thing, but he is the exception. He’s got the sweet and loving personality of Dwayne Johnson and the activism and presence of Colin Kaepernick. Samson boosts this book to the 5 star status for me because he’s just such a delicious and wonderful hero. It’s not his looks (though they are nice); it’s that he’s just the kind of guy you’d want all men to be. He’s kind, loving, loyal, caring, protective, and patient. And he’s funny. And he’s got that dead sexy on a stick, dipped in chocolate thing.

Samson comes from a legacy of football players, his father and his uncle both also pro-ballers. His father died soon after Samson graduated college; and his uncle Joe died a few months ago, after being cared for by Samson for the last decade. Both men had suffered complications from chronic traumatic encephalopathy (CTE) from their time in the NFL, though the NFL fought for years denying it was caused by concussions from playing on the field. Because of a stance Samson had made early in his career, he is considered the Lima Curse (instead of the Lima Charm), and he spends his time now not revisiting his past...or watching replays of his time in the NFL.

Samson has taken on a job for his Aunt Annabelle, in an attempt to restore some of Matchmaker’s bottom line. As spokesperson, he will date a number of women until he finds the one. The problem is, he’s already met The One, and he met her on Crush--briefly, before she blocked him for ghosting her, and she just so happens to be the owner of the company.

Unfortunately, Rhi would rather be set on fire than give Samson the Ghoster a second chance. No matter how wonderful he was in bed. No matter how sincere he seems to be in his explanation of why he didn’t show up that night. Still...getting close to him can possibly get her close to his aunt and get her one step closer to owning Matchmaker. The problem is the more she lets Samson close to her, the more she wants him close. All her rules about no second chances or nothing too serious go out the window wherever Samson is concerned.

What I enjoyed most about this book is that it was so much more than a rom-com. It didn’t rest only on the conflict of an accidental ghosting or the tension of competing companies. There were underlying big issues that lent real character and conflict to the story--namely CTE and how those in the NFL are treated as well as a situation that was very much Me Too Movement-like as the reason why Rhi is closed off is revealed on the public stage and more women come out to say it had happened to them as well.

Don’t worry though--the book is full of cute one-liners, sexy steamy scenes, and sigh-worthy grand gestures. I think the book would have something for everybody. I hope you check it out.