Review - - Her Other Secret 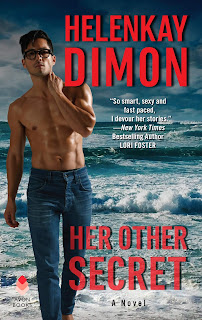 Is it the perfect escape?
Whitaker Island is more than a getaway. For Tessa Jenkins, the remote strip of land in Washington state is a sanctuary. Fleeing from a shattering scandal, she has a new name, a chance at a new beginning, and a breathtaking new view: Hansen Rye. It’s hard not to crush on Whitaker’s hottest handyman. At six-foot-three and all kinds of fine, he’s also intensely private—and the attraction between them soon simmers dangerously out of control.
…or a private trap for two lovers?
After a devastating family tragedy, Hansen finds the pebbled shores of the faraway island to be an ideal refuge. Letting down his guard for the sexy, impulsive Tessa is an unexpected pleasure. But there’s another newcomer to Whitaker. He’s no stranger to Hansen. And when he’s murdered, the crime casts a threatening shadow. As suspicion falls on Hansen, all his secrets are about to collide with Tessa’s. Now the pasts they were determined to outrun are catching up to them. So is a killer who’s putting their love—and their lives—on the line.

HelenKay Dimon launches her newest series with this twisty tale that's sure to appeal to lovers of mystery and romance alike. Set in the Pacific Northwest, Dimon's remote Whitaker Island is a perfect refuge for people seeking to leave their secrets behind. But when someone's past decides to pay a visit that results in murder, nobody's secrets are safe. In fact, nobody on Whitaker Island may be safe, period.

I love a good whodunit with quirky characters, multiple mystery threads, amateur sleuths, and an assortment of potential villains, all of which Her Other Secret has in spades. I immediately felt an affinity with Tessa and her impulsive, inquisitive nature. As for Hansen...let's just say that a sexy, grumpy, man of few words, with a hot body and hidden emotional wounds is one who will always hold my attention. He's a bit of a jerk in the early stages of the book but, not to worry. He steps up, thaws very nicely under Tessa's care, and by the end of the book, I had fallen for him just as hard as she did.

There are multiple mystery threads running through this story. One I figured out early on while the other took me longer but while solving them lessened the suspense a bit for me, it didn't detract from my enjoyment of the rest of the story, especially the evolution of Tessa's and Hansen's relationship. There are also intriguing secondary characters and multiple mystery threads - Who really owns the island? How is Sylvia connected to them? And, what's up with  Maddie and Ben? - that I'm looking forward to learning more about as the series progresses.

I will definitely be tuning in for book number two!

Where would you go if you were trying to outrun secrets or scandal? Personally, I think I'd opt for something a little more tropical than Washington State.