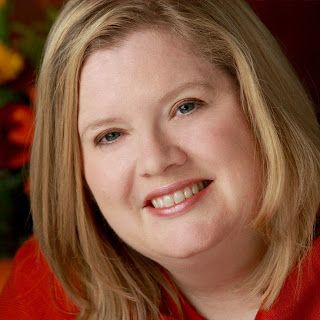 Many of you know that I am a huge fan of New York Times and USA Today best-selling author Elizabeth Hoyt's books. So it goes without saying that I am thrilled to host her her today at the Romance Dish! She blew me away with her debut, The Raven Prince, and has been an auto-buy ever since. Her latest, Thief of Shadows, is her eleventh published novel and fourth in her wildly popular Maiden Lane series. (Check out my review here!) The previous book in the series, Scandalous Desires, is a finalist for this year's prestigious Romance Writer's of America's RITA Award. It's Elizabeth's fifth nomination! Since I LOVED the book, I'll be cheering for her to win!

Elizabeth lives in central Illinois with a trio of untrained canines and a garden in constant need of weeding. She can be found online at:

One of the most frequent questions I get in interviews is: Why write in the Georgian period? A historical romance writer doesn’t choose her time period on a whim, of course, so I have all sorts of answers, like these: The beginning of the Age of Reason…blah, blah, blah…London growing both in size and economic power…yadda, yadda, yadda…a time of great social turmoil…yawn, whatever. But really, truly what it all boils down to is: Swords.


Dude, it all revolves around the swords.


This is because unlike other common historical time periods *cough* the Regency *cough* swords were an everyday item of apparel for gentlemen in the Georgian period. And guys walking around with three feet long, sharp weapons leads, naturally, to swordfights. Awesome swordfights. Actual, realio, trulio swashbuckling. All the time.


At this point I should perhaps explain that I spent many a summer afternoon watching old movies on TV. Movies like Captain Blood, The Three Musketeers, and Scaramouche. What do all of these films have in common—besides lots of badass swashbuckling? They’re set in the Georgian period, that’s what. Okay, technically, both The Three Musketeers and Captain Blood are set in the seventeenth century, but they certainly aren’t set in the *cough* Regency period *cough*. And! Scaramouche is definitely set in the Georgian period and has the most awesome swordfight—possibly of all movie time—which takes place in an opera house. Scaramouche’s swordfight is so awesome, in fact, that parts of it appear in my latest book, Thief of Shadows. 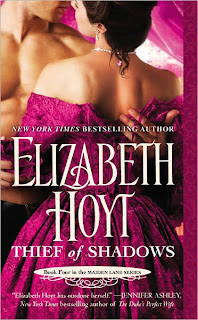 In Thief of Shadows my hero, Winter Makepeace, is a staid manager of an orphanage by day, but! by night he becomes the masked Ghost of St. Giles, protector of the poor. At one point in the book, after kissing the heroine senseless, the Ghost is accosted by an aristocrat at the opera house. Said aristocrat has misinterpreted the Ghost’s actions toward the heroine and—because he’s a Georgian aristocrat and is wearing an actual badass sword—attacks the Ghost.  Who defends himself, up the stairs, across a hall, into an opera box, and onto the balcony railing high above the pit of the opera house, all the time fighting backwards, because when I write a hero, by God, he knows how to wield a sword.


Anyway, read my book, find out how the scene ends, and if the heroine teaches Winter a few new moves. Har! Could not resist. And! When you get a chance, rent Scaramouche, because that swordfight goes on for like fifteen minutes and is seriously a choreographing work of art. Also, please note that Mel Ferrer, who plays the bad guy, is one hundred times more sexy than the hero played by Stewart Granger—the great lunking ox—despite Mel’s unfortunate first name.

**************************************************
EXCERPT from THIEF OF SHADOWS by Elizabeth Hoyt
Winter Makepeace waited for Lady Beckinhall to turn her back and then stripped off his coat and waistcoat. It was brought home with forceful memory that he’d been nude before this woman only a sennight ago.
Even if she didn’t know it.
His breeches followed and then he was in shirtsleeves and smalls. He glanced at the tailor.
“The shirt as well, sir,” Mr. Hurt said. “The fashion is for a tight-fitting waistcoat and coat.”
“Yes, indeed,” Lady Beckinhall called over her shoulder, “I want the suit to be in the first stare of fashion.”
Winter grimaced but took off his shirt.
The tailor nodded. “That shall do for now, sir.”
Winter stood with arms outstretched, feeling exceptionally silly as the tailor moved about him, wielding a measuring tape. 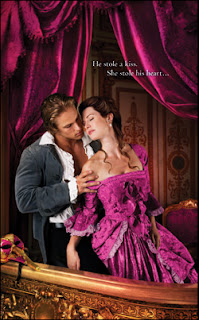 “Have you been practicing flattery?” Lady Beckinhall asked just as the tailor’s thumb, holding the tape, pushed up the lower edge of Winter’s smallclothes.
“As per your instructions,” Winter replied, watching as Mr. Hurt caught sight of the end of the scar revealed by the rucked smalls.
The tailor hesitated, then continued his work.
Lady Beckinhall sighed very quietly.
Winter’s attention snapped back to her. “I am in admiration of the way in which you can order tea so very…er…efficiently, my lady.”
Mr. Hurt shot him a pitying look.
There was a slight pause.
“Thank you, Mr. Makepeace.” Lady Beckinhall’s voice was choked. “I must say, you give the most imaginative compliments.”
“Your tutelage has inspired me, ma’am.”
The tailor looked doubtful.
Winter cleared his throat. “And, of course, who would not be, ah…exhilarated by the loveliness of your countenance and form.”
He arched an eyebrow at Mr. Hurt.
The tailor made a face as if to say, Not bad.
Which was probably as good as Winter was likely to get at this art.
But Lady Beckinhall wasn’t done. Her head had tilted to the side at his words, making some type of jeweled ornament in her glossy dark hair sparkle in the light. “My form, Mr. Makepeace?”
Ah, this was dangerous territory. “Yes, your form, my lady. It is a strong and feminine form, but I think you already know that.”
She chuckled, low and husky, sending shivers over his arms. “Yes, but a lady never tires of hearing compliments, sir. You must keep that fact in mind.”
Her little maid nodded vigorously in agreement.
“Indeed?” Winter stared at Lady Beckinhall’s back, wishing he could see her face. Her plump mouth would be curved slightly in amusement, her blue eyes dancing. His body reacted at the thought and he was heartily glad that Mr. Hurt had moved to his back.
“But you must be awash in a sea of compliments, my lady,” Winter said. “Every gentleman you meet must voice his admiration, his wish to make love to you. And those are only the ones who may voice such thoughts. All about you are men who cannot speak their admiration, who must remain mute from lack of social standing or fear of offending you. Only their thoughts light the air about you, following you like a trail of perfume, heady but invisible.”

He heard her startled inhale.
The maid sighed dreamily.
Mr. Hurt had stopped his quick, capable movements, but at Winter’s glance, he blinked and resumed his work.
“Thank you, Mr. Makepeace,” Lady Beckinhall said quietly. “That…that was quite wonderful.”
He shrugged, though she couldn’t see him. “I only speak the truth.”
“Do you…” She hesitated, then said throatily, “Do you think me shallow for enjoying such compliments?”
Her back was confident and straight, but her neck, bared by her upswept hair, was white and slim and held a hint of vulnerability. She was so forthright, so assured of herself that he’d not noticed the tender spot before.
“I think you sometimes like to hide behind a facade of gaiety, my lady.” He cleared his throat. “I also think that when you enter a room, all eyes turn to you. You blaze like a torch, lighting the darkest corners, brightening even those who thought they were already well lit. You bring joy and mirth and leave behind a glow that gives hope to those you’ve left.”
“And you, Mr. Makepeace? Are you one of those who thought themselves well lit?”
“I am as dark as a pit.” Now he was glad her back was turned. “Even your torch will have difficulty lighting my depths.”

©Elizabeth Hoyt
Posted by Andrea at 12:30 AM