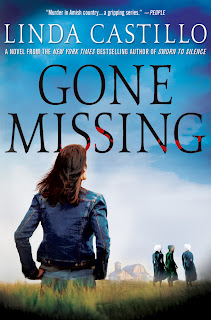 Gone Missing is the newest book in Linda Castillo's suspense series set in Ohio's Amish Country and starring small town Chief of Police Kate Burkholder.   The New York Times bestselling series has garnered notable reviews, being called "impossible to put down" (BookPage), "gripping" (People) and "teeth-chattering suspense (USA Today).  Less than twenty pages into Gone Missing (my first Castillo book), I was already echoing those descriptions and adding a few more of my own.

Kate Burkholder understands the confusion and secret longing for city life that go hand in hand with many Amish teens.  She has, after all, once walked in their shoes.  Raised in a devout Amish family, Kate rebelled against the strictures of that life and left when she turned eighteen.  Now thirty-three, she has a successful career and sometime relationship with state agent, John Tomasetti but coming to terms with her place in the world, her excommunication from the Amish community and the strained relationship with her family is an ongoing journey.

If we're talking baggage, John Tomasetti has a whole set that he carries in his heart.  A widower whose wife and two children were murdered, he's just beginning to emerge from grief and learning to reach for happiness once again.  He and Kate have worked together, become friends and are occasional lovers but he's ready to deepen the relationship...if he can scale the emotional walls she's erected around her heart.  Oh yes, and keep her alive long enough to tell her how he feels.

When an Amish girl disappears in another part of the state, Tomasetti knows Kate is the person they need on their team if they have any hope of solving the case.  The Amish are a closed society; not trusting outsiders.  They won't be forthcoming with any information that may cast the slightest negative light on them or their religion, even if that information could help find the missing teen.  Kate knows the Amish ways, speaks Pennsylvania Dutch and though she may be viewed with suspicion and mistrust by her own Amish family and former friends, her past gives her the necessary tools to gain the trust of the people in the community where the missing girl lived.  They've barely begun the investigation when another girl goes missing, a body is found and it becomes apparent that these girls are not leaving their homes voluntarily.  The danger escalates and when it touches Kate's own family, she finds herself in a race against time to catch a killer before more lives are lost - including her own.

I love a good romantic suspense story that keeps me on the edge of my seat and this book certainly fits that bill.  I began reading Gone Missing in the waiting room at my doctor's office yesterday, continued reading through dinner and finished it last night.  It's a fast-paced story with numerous twists and turns that grabbed me with it's compelling first scene and still haunts me a day later.  I have the feeling that haunting won't go away for awhile.  The emotions are intense, the suspense thrilling and the mystery well written and realistic.  The characters - good guys and bad - are so vividly and realistically depicted that I was drawn into their lives and their minds with ease.  And let me tell you, some of those minds are scary places to be.  I was also fascinated by the Amish communities in which most of the story takes place.  I already knew a bit about their culture but learned much more through the actions of characters in this book.  It's clear that this aspect of the story was well researched.  I probably would have given this book five stars had it not been written in first person.  I found it a bit disconcerting for the first half of the book.  Having said that, though, by the time I got to the middle of the book when the tension is boiling over, the action practically non-stop and I was wholly invested in the characters, the first person language ceased to be a problem for me.

While this book stands on its own, Kate's individual growth journey begins with the first book in the series and continues with each successive book while her relationship with John begins at some point during the first three books.  I'll be buying those books soon.  I'm so intrigued by this character; by her dedication to helping others through her police work and her emotional struggle with the two worlds she attempts to straddle; liked and well respected in her new life, cast aside by her old.  I'm looking forward to going back to the beginning and taking this journey with her while waiting for the next book in the series (which the author's website says she's hard at work on).

I also recently learned that the first book in the Kate Burkholder series, Sworn to Silence is slated to be made into an original movie starring Neve Campbell in the lead role.  I rarely agree with Hollywood casting of books I love but, with this one, I have to say I think they're spot on and I can't wait to see the movie when it comes out!

Are you a fan of romantic suspense?  Have you read any Amish romances?  Visited Amish Country?  Are you reading the Kate Burkholder series?

We're giving away two copies of Gone Missing today provided by St. Martin's Press.  (U.S. addresses only)  Leave a comment to be in the running and be sure to tell us if you're in the U.S.


Review copy received from Big Honcho Media.
For more information about the Kate Burkholder series, visit http://lindacastillo.com/
Posted by pjpuppymom at 12:50 AM