As many of your know, Romance Writers of America is hosting their annual conference this week. Our special guest today, New York Times best-selling author Jodi Thomas, is there and she is having a blast, I'm sure! But before she left, she wanted to share a little bit about her upcoming release, Wild Texas Rose, which comes out Tuesday, August 7. So, take it away, Jodi!


WILD TEXAS ROSE is my 25th historical romance about Texas and I’m happy to say that I think readers will discover something new in this book that I’ve never seen done in a historical. I love writing about groups of people and this time I have more than one romance going at once. It was great fun to write and I lost a great deal of sleep because even after I turned off my computer I couldn’t turn off the story. The characters were still dancing in my head.


My husband also developed a strange habit of saying, “All right, all you people, get out of this bed. We’ve got to get some sleep.”


WILD TEXAS ROSE is set in Fort Worth in 1876, just after the Texas &Pacific Railroad connected the town to the rest of the world. It deals with two men who were friends as boys and who both came back scarred from the Civil War. Neither believes they will ever find love. 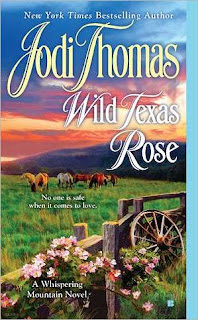 One, Abe Henderson walks with a limp, thinks he wouldn’t know how to love a woman even if he did find one who would give him a second look and has lived with his loneliness so long it feels normal to him. His only real friend, Killian O’Toole, lost the last of his family in the war and cannot turn loose of his brother. He often talks to Shawn as if his brother were still alive and standing next to him. Their lives change as Killian tries to help Abe by telling him suggestions that he claims Shawn, the ghost, has told them.


Both men learn about loving during a crisis involving a runaway bride and a murder threat on a Texas Ranger.


In WILD TEXAS ROSE I loved writing about Rose and Duncan McMurray because I saw them as children in an earlier book called TALL, DARK, AND TEXAN. Though they were both adopted into the McMurray family, they grew up needing to know the other was near. Sometimes people fall in love and sometimes it grows slowly over time. In WILD TEXAS ROSE I had fun looking at all the ways love comes unexpectedly into one’s life.


Come along with me and fall in love.


Twenty-five-year-old Rose McMurray may be beautiful, smart, and capable of running her adopted family’s ranch at Whispering Mountain, but she’s backed away from marriage three times without giving any reasons. Everyone thinks Rose is a coward, afraid of any adven-ture, including falling in love. She’s never done a single wild or reckless thing in her life...until now.


Dear readers, what are some of your favorite romances that are set in the great state of Texas? Comment for a chance to win a copy of Jodi's Wild Texas Rose! Contest is restricted to U.S. and Canadian addresses only, please. Good luck to all!
Posted by Andrea at 12:30 AM