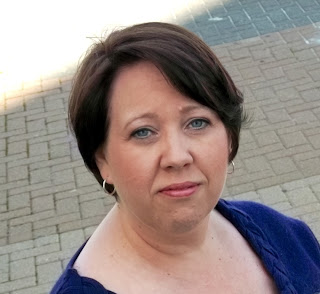 I'm so excited to welcome Terri Osburn to The Romance Dish today.  Terri and I first met several years ago at the Eloisa James bulletin board...or maybe at Squawk Radio.  We frequented both venues so it's hard to tell which was our first meeting.  Since then, I've watch Terri transition from a loyal romance reader to a popular blogger to a Golden Heart® finalist.  I have complete confidence that it's only a matter of time until we welcome her here as a published author!


Terri has been reading Romance for more than twenty-five years and writing her own stories for the last five. She is a 2012 Golden Heart® finalist in the Contemporary Single Title category, a PRO member of RWA, and is represented by Nalini Akolekar of Spencerhill Associates.  She lives on the coast of Virginia with her teenage daughter, two fat cats, and one hyper Yorkie-poo. She also blogs with a group of aspiring/published authors aboard the Romance Writers Revenge sailing the stormy publishing seas with little more than a wish and a whistle. Find out more about Terri at her website.

I've been reading Romance for almost three decades. For all that time, writers have been my rock stars. Back in 2006 when I stumbled onto Eloisa James' bulletin board late on a Friday night, I had no idea what that one click would mean. I just knew I could talk directly to this author I'd adored for years and she actually talked back.

How cool is that??

I didn't know what a blog was. Had never heard of Romance Writers of America® (RWA). Didn't even know there were awards for Romance novels let alone one for books yet to be published. But I caught on quick.

Thanks to other members of that bulletin board, I got the itch to write my own novels. At first it was just for fun. "Let me see if I can do this" rolled into "I'll never be good enough to get published, but I could still have fun with it" which slid right into "I'd kind of like to be published."

Six years later I'm up for a Golden Heart® award, which according to the RWA website "promote[s] excellence in the romance genre by recognizing outstanding romance manuscripts." That's me with an outstanding manuscript. How about that?

The accolades that come with this recognition are huge. First off, just becoming a finalist is the win. To actually have my name called on July 28th at the big awards ceremony in Anaheim, CA would be the delectable frosting on a killer cupcake. Becoming part of this class of 2012, which we've affectionately titled The Firebirds, is like landing in the middle of a hot tub filled with Buffie's hot bods and suddenly looking like Angelina Jolie.

Yeah, it's that good.

But the real fantasy, other than landing an amazing agent (waves to Nalini!) and being within smelling distance of selling, is that now I get to hang out with those rock stars. Some of them even act like I'm one of their ilk. Not a rock star, of course, but a writer. Authors I've watched turn out best seller after best seller have emailed me. ME!

They offer their congratulations, their wisdom, and their support. I've always known that Romance authors are the coolest people on the planet, but now I get to stand around with them and pretend I'm one of them. And they aren't tossing me out and bolting the door. Crazy. Crazy I tell you!

This is the ultimate fantasy for a Romance reader. It's like being a music lover and suddenly landing a job with Rolling Stone. Or a movie buff and being asked to sit front row at the Oscars. And attend all the parties! (We must not forget the parties.) If anyone ever ventures to create the ultimate fantasy getaway for Romance readers, just give them the Golden Heart® experience.

Talk about the trip of a lifetime.

Have you ever considered writing a Romance? Ever met your favorite author? Who and when, tell us all about it. Is there an author you're dying to meet? Give them a shout out today and maybe they'll pop up in your neck of the words on their next book tour.


Thanks for blogging with us today, Terri and best wishes for "Meant to Be!"


Here's the blurb from "Meant to Be," Terri's unpublished manuscript that's a finalist for the Golden Heart®.


"Meant to Be" - finalist in the Contemporary Single Title Category

Lifelong people-pleaser Beth Chandler will do anything to make a good impression on her future in-laws, including defy her fear of boats to make the ferry crossing required to meet them.  Lucky for her, a lovable mutt and his tall, sexy, blue-eyed owner provide enough distraction to subdue her paralyzing panic attack. But Beth's human tranquilizer turns out to be her future brother-in-law, Joe Dempsey, and their instant attraction is both unwelcome and undeniable.

When a demanding case pulls her fiancé back to the city, Beth begins to realize he's already married – to his work. Are solitary nights and mind-numbing dinner parties really what she wants for her future? Torn between loyalty to Lucas and her growing feelings for Joe, Beth begins to rethink her choices and consider a future different from the one laid out before her. One including an island, a dog, and a man she can never have.

I don't know about the rest of you but I can't wait to read the whole story!