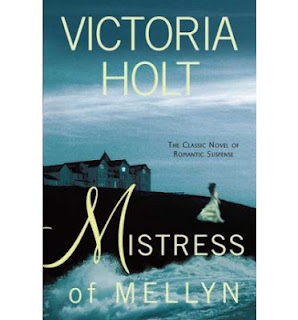 Ah, the joys of a gothic romance! I don't think I'm telling anyone who's read my stories anything new when I say that all these books with creepy castles and sinister heroes and innocent governesses have exerted a huge influence on my writing.

In the Australian market, the biggest name in gothic romance was Victoria Holt. Victoria Holt was the pen name of an extremely prolific English writer Eleanor Hibbert (1906-1993) who also wrote historical fiction as Jean Plaidy. In fact, she had eight pseudonyms and clearly a cellar full of elves who wrote for her while she sipped margaritas by the pool - check out the huge list of her published works in the Wikipedia article about her.

I discovered Victoria Holt when I was about 11. We used to do a yearly trip to the book exchange about 20 miles away to get reading for my mother and me and we'd come home with boxes of secondhand books, mostly Mills and Boons (Harlequins). But other things would usually squeeze in - this is how I discovered Mary Stewart, for example.

This particular year, for some reason BRIDE OF PENDORRIC (published in 1963) came home with us. Wow, I was hooked. From memory, BOP owed a lot to REBECCA. You know, handsome and mysterious aristocrat marries an innocent girl and carries her back to his brooding Cornish castle where evil deeds have taken place. I was hooked on the setting and the sexual tension and the  dark and dangerous hero, who just might have been the bad guy (until you got to the end and discovered that the kindest character in the book was actually the villain - a pattern I remember from other VH books).

After that, it was on for young and old. I read Victoria Holt like she was going out of style - actually in the 1970s, she wasn't, but come the 1980s and readers wanting a bit more explicit sex in their books, sadly she WAS out of style.

By that stage, I'd moved past my Victoria Holt obsession so it was interesting going back to read her again when I hadn't picked her up since my early teens.There's clearly still an audience for her, she's remained in print - perhaps for people re-reading their youthful faves like me! To my current regret, I'd cleared out all her books on one of my house moves years ago so I needed to buy the two featured in today's review.

So recently I settled down to read MISTRESS OF MELLYN and a book that was one of my favorites, ON THE NIGHT OF THE SEVENTH MOON.

MISTRESS OF MELLYN was her first Victoria Holt book. It owes a powerful debt to JANE EYRE.
Innocent but feisty Martha Leigh arrives at mysterious Mount Mellyn on the wild Cornish coast to take up a post as governess to difficult Alvean. But she soon loses her heart to mysterious Connan TreMellyn, the lord of the manor and Alvean's father. Connan has recently lost his wife in unexplained circumstances and an air of tragedy and danger hangs over this ancient house. Even as she falls more deeply in love with Connan and he appears to reciprocate her feelings, Martha wonders if she can trust him. And then of course, things start going bump in the night and nasty accidents become daily occurrences. Eeek! Is the man she loves out to kill her? Is someone else out to kill her? Will someone ever clean out the cobwebs from the sinister cellar?

This is still a good read although it didn't cast quite the spell over my more mature (at least in years!) self that it did when I was 12. The brooding atmosphere is really well done and the setting is vivid and memorable. Martha felt like a bit of a cypher - she's there to solve the mystery and marry Connan, but she never really develops much beyond central casting impoverished yet spirited governess mode. Connan is more interesting - Victoria Holt definitely had a way with a tortured hero.

One of the surprises for me returning to this book after so long is how little time the hero and heroine spend together on the page. There's a large cast of supporting characters (necessary for the red herrings) so Martha and Connan seem to be in love after only a couple of meetings. 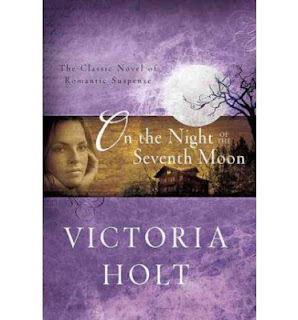 Wow, this one still packs a punch and rather knocked MISTRESS OF MELLYN out of the (turbulent) water. Influences on SEVENTH MOON include Grimm's fairytales and GASLIGHT. Innocent English schoolgirl Helena Trant becomes lost in the mist one evening when she's a boarder at a convent in the Black Forest. Her rescuer is mysterious, sexy bad boy Maximilian who takes her back to his isolated hunting lodge. So begins a relationship that will bring danger, passion and intrigue into Helena's life for the next ten years.

The relationship between the hero and heroine in this one is tempestuous and dramatic and fraught with tragedy and peril. Again, Maximilian disappears off the page for large slabs of the book but the set-up of this one is so compelling, you almost don't mind. Again, there's a huge cast of people who might or might not be baddies. A sinister air doesn't necessarily a villain make in a Victoria Holt! Helena is considerably more strongly developed than Martha Leigh. She grows beautifully from mouthy but naive schoolgirl to a woman who's ready to fight for her destiny. Maximilian is a seriously attractive hero although as usual, for much of the story, you're not quite sure whether his intentions are benign.

ON THE NIGHT OF THE SEVENTH MOON scores across a whole range of areas. Exotic, fairytale setting; rip-roaring romance; labyrinthine plot; breathtaking mystery; great characters; brooding gothic atmosphere. If you're new to Victoria Holt or if you've been away from her for a while and want to test the waters again, I'd highly recommend ON THE NIGHT OF THE SEVENTH MOON as the book to get you back into the shadowy swing!

So are you a Victoria Holt fan? Any favorites? Why do you think the gothic romance went out of fashion? Any other gothic writers you like? Let's creak open that heavy oak door with the lion-head knocker today and visit the bats in our belfries.
Posted by Anna Campbell at 12:00 AM