The Search Is Over! 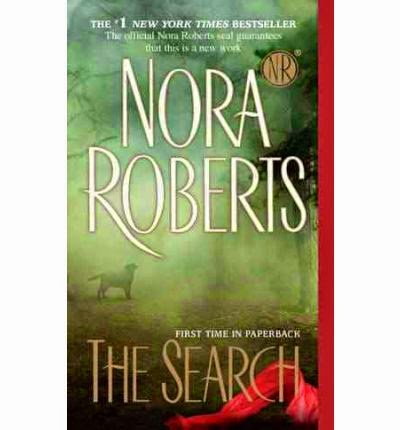 I've been on a major Nora Roberts kick lately. I even blogged about it over with the lovely Romance Bandits. You can see my post here: http://romancebandits.com/im-in-the-mood-for-love-and-nora/

I've enjoyed all the books I've read by the great Nora, but I must say my favorites so far on this glom have been her single title stand-alones. I absolutely loved THE WITNESS and NORTHERN LIGHTS and really enjoyed WHISKEY BEACH. Her stand-alones tend to be longer than her series single titles and often have a strong mystery/suspense plot. They also include a rich cast of secondary characters.

Another to add to this wonderful list of Nora Roberts favorites is THE SEARCH which I picked up thanks to some recommendations for further reads on that Romance Bandits post. I devoured this one pretty much in one sitting - a bit like the way the dogs, who are such wonderful characters in their own right in the story, wolf down their dinner!

THE SEARCH  was published in 2010 and is set on a fictional island in Puget Sound off Seattle. By the way, one of the things I absolutely love about NR's books is the way she writes about places. The setting is always such a vivid part of the story and rainy, isolated Orcas Island is no different.

The heroine Fiona Bristow has come to this wild and beautiful place to set up business as a dog trainer and to escape the horrors inflicted upon her by the Red Scarf Killer. It's taken her years, but Fiona has finally found some peace after all the pain and tragedy, in working with the dogs and playing an important role in a search and rescue team.There's even the possibility of romance with laconic furniture designer Simon Doyle who needs help with his delightful puppy Jaws (cute, huh?).

But the Red Scarf Killer hasn't forgotten that Fiona is the only woman to escape him and while he languishes in prison, he hatches a brilliant but cruel plan to use an apprentice to finish off this woman whose mere existence challenges his evil ego. Even as Fiona falls under the spell of the first man to touch her heart since the Red Scarf Killer murdered her policeman fiance, danger looms closer and closer and threatens to steal not only her happiness but her very life.

While the suspense plot of this one is really edge of your seat, it's the characters that make the book special. Fiona has been to hell and back and as a result, she's strong, she doesn't put up with any time wasters, and she goes after what she wants. This is a heroine who is perfectly capable of rescuing herself (even as a young woman when the RS Killer kidnaps her). She has a strong moral compass and a guarded but deeply loving heart that until she meets Simon, she mainly devotes to her canine charges.

Simon is a wonderful creation - such a bloke! He doesn't talk when he doesn't feel like it, he's focused on his work, he definitely doesn't want to fall in love. But he meets Fiona and he's a goner. Always lovely to see the strong, silent type struggling with feelings that he doesn't welcome for one minute but which he can't escape. And Simon's a man who when he commits, REALLY commits. Watching the relationship between these two strong, independent souls as it grows and blossoms is a really emotional experience. For me, the love story was the heart of THE SEARCH.

So if you're looking for a great read that's likely to keep you turning the pages into the wee small hours - not to mention the chance to meet some great people and some seriously appealing pooches - I'd recommend THE SEARCH.

Are you a romantic suspense reader? Do you have any recommendations?